It took Apple more than nine years to recognize that the iPad and iPhone were different enough to warrant separate operating systems. While there were minor differences in features between the two devices in recent years, it’s only this year that it was officially forked into two slightly different operating systems with distinct names: iOS 13 and iPadOS 13. (The actual first release of iPadOS was version 13.1.) Now, with the changes in this new operating system, an iPad could replace a laptop for many people for much or even all of their work. iPadOS may really be a game changer for mobile computing.

For the most part, iPadOS is just like its sibling iOS for the iPhone and iPod touch, but there are a number of features designed to make iPadOS more “computer-like.” Until recently, iOS was a one-window-at-a-time operating system, but that changed with some multi-tasking features introduced in iOS 12. iPadOS 13 has a lot of new features that offer you more ways to work with multiple apps and windows. You can now work with spaces in iPadOS, which can contain multiple windows from an app, or windows from different apps. You can use App Exposé to display all the windows of an app and switch to another window. 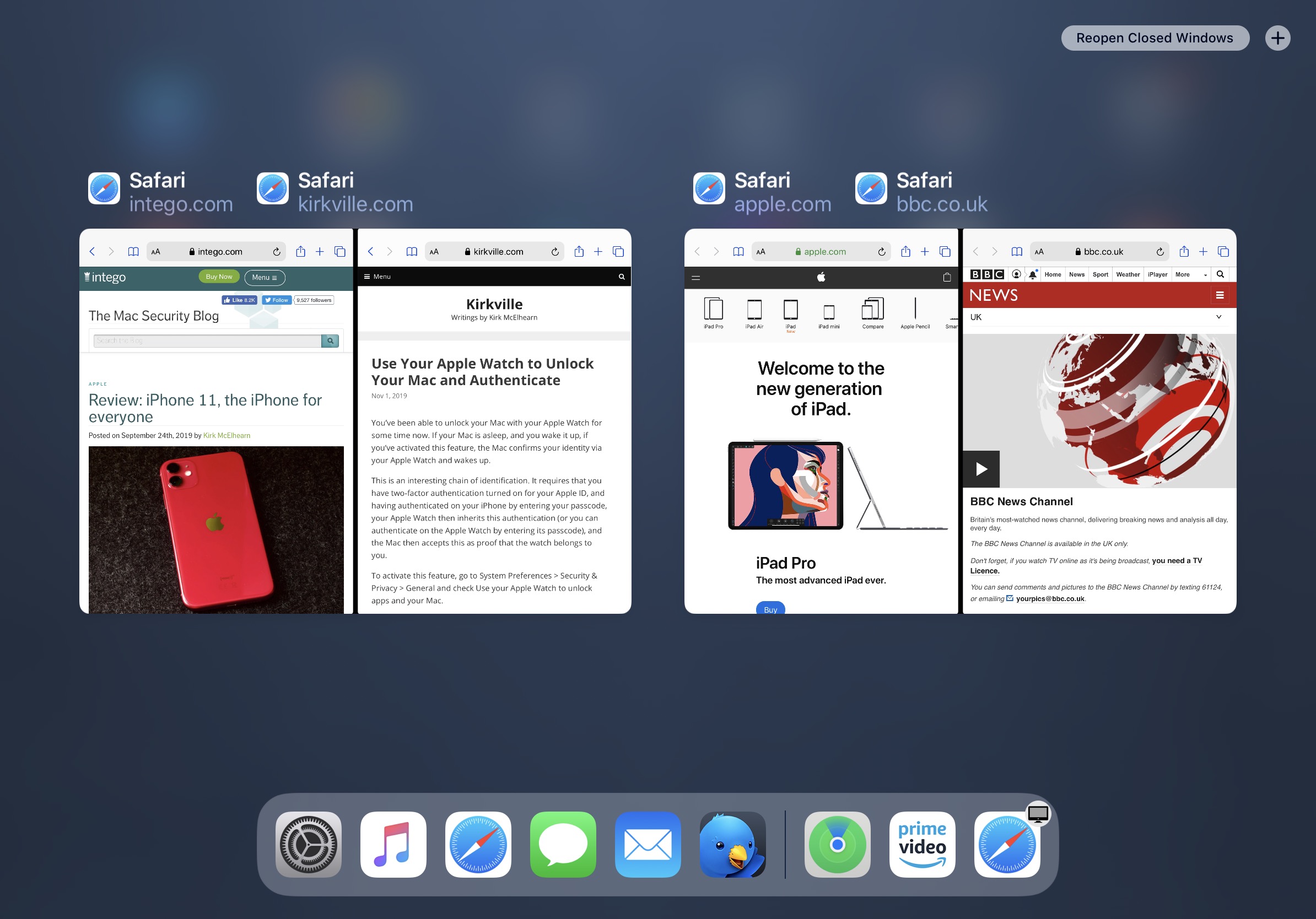 Apple has highlighted the new desktop-class browser in iPadOS, and this feature alone goes a long way toward extending the possibilities of the iPad. You are no longer limited to using mobile versions of websites, and you can now access sites such as Google Docs in Safari. This means that for some sites, notably for productivity tools, you have access to the services’ full range of features in the browser, and you don’t need to use separate apps.

Another big change in iPadOS is the ability to download, manage, and upload files. If, for example, you need to download a file from a website to add it to a cloud storage folder, or to pass it on to a colleague, you can do this from Safari or other apps. Files can be downloaded locally, and the Files app lets you send them to other locations.

You can also connect external storage devices to an iPad, such as a thumb drive or any hard drive. You can copy files to and from the device, and use them, via the Files app, to work with your projects. Add photos from an SD card, PDFs from a thumb drive, and more.

Even better, your iPad can now connect to a local server. So when you’re at home or at the office, you can mount your Mac or PC and access files from that device. This is a huge enhancement for anyone needing to work with files on an iPad. Below, you can see my iPad is connected to the home folder on my iMac: 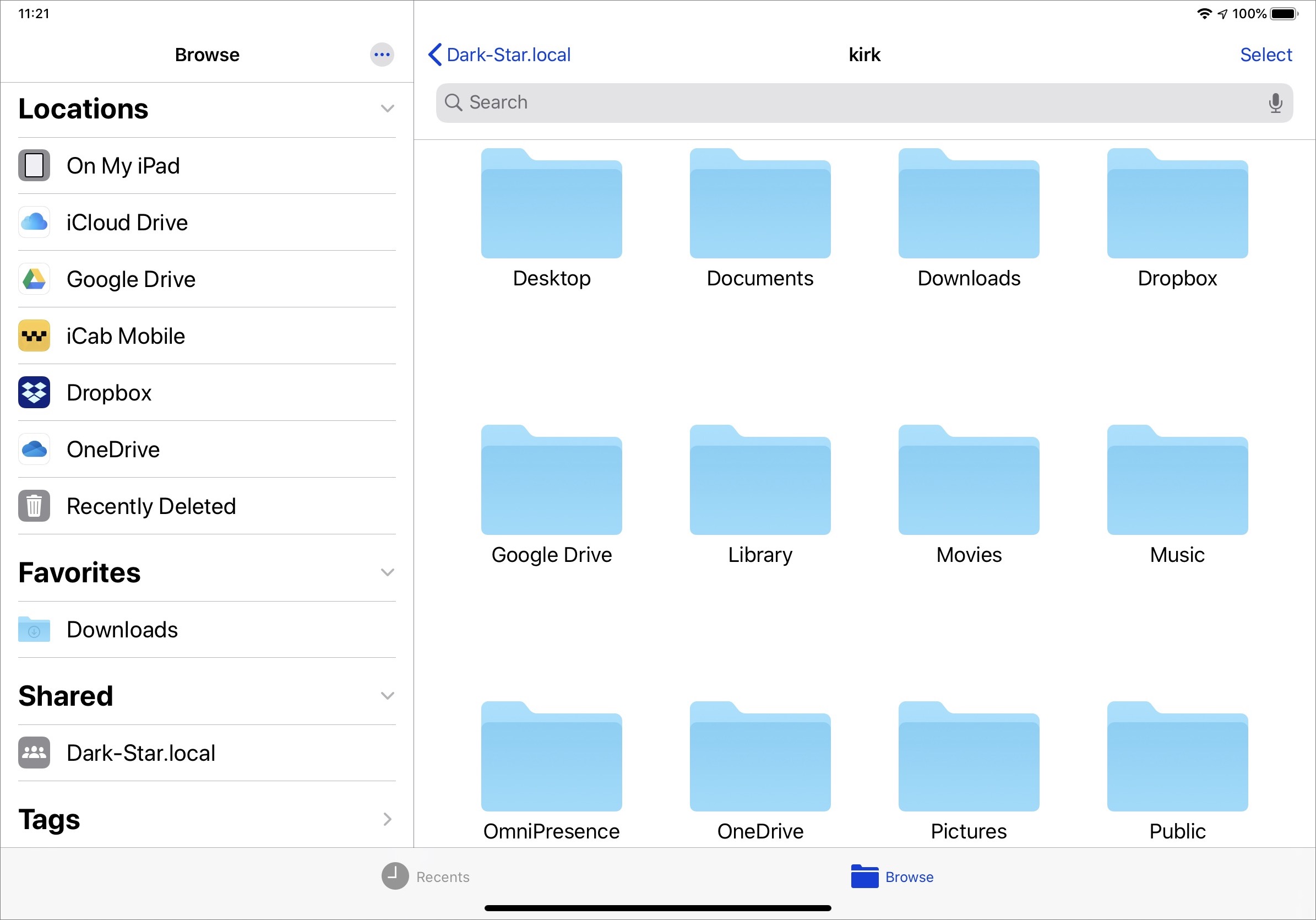 Text editing has long been difficult on the iPad, but new gestures for editing text have been added in iPadOS 13. I’m not a big fan of gestures; they are hard to discover and easy to forget.

You can tap and hold the cursor, then drag it anywhere you want. You can select a block of text by dragging your finger over it. And you can select text by tapping: tap twice to select a word; three times to select a sentence; and four times to select a paragraph. There are also new copy, paste, and undo gestures, which involve three-finger pinches, drops, and swipes. I really think Apple should develop a Gestures app that explains all the gestures available on iOS and iPadOS, because there are so many that it’s hard to remember them all.

iPadOS sees some interesting improvements in using both the on-screen and hardware keyboard. You can shrink the iPad’s keyboard using a pinching gesture from both sides. This allows you to both type with one hand (more correctly, one thumb) but also to use the new swipe-to-type feature in iOS 13 which isn’t available when you use the full-sized keyboard. 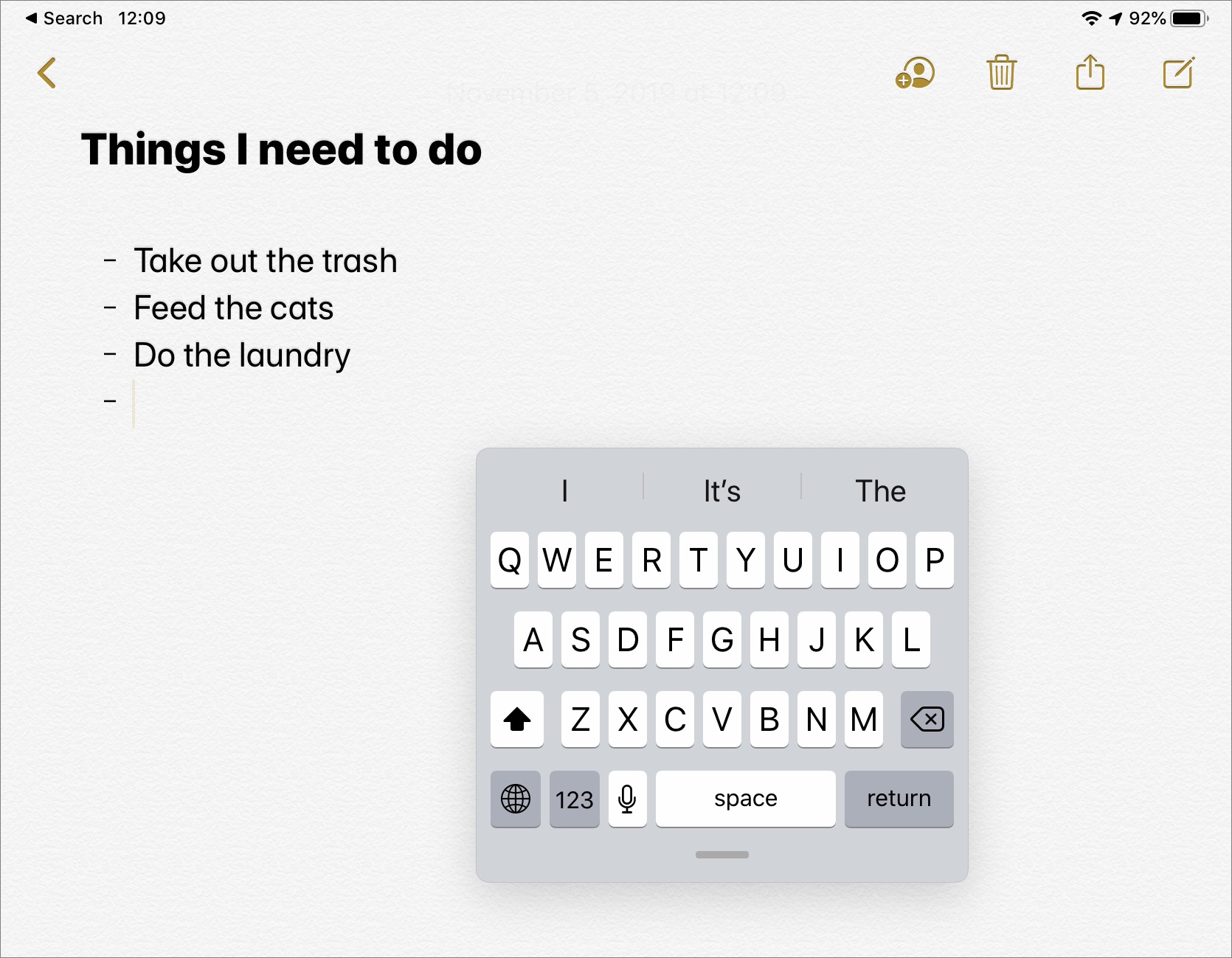 There are lots of other new features in iPadOS 13 worth checking out. If you’re a fan of Dark Mode, you can use it on your iPad. The new home screen allows you to (finally) have smaller icons, and to display six apps or folders on each row, instead of four, and you can pin Today View widgets on the home screen if you want to see them all the time (at least when you are in landscape mode).

If you use the Apple Pencil as an input or editing device, a new set of tools and a shrinkable palette makes it easier to work with. You can now install custom fonts, there are new editing tools in the Photos app, and much more.

Can an iPad replace a laptop?

Comparing a tablet to a laptop is a bit like comparing apples and potatoes. Apple has been working hard to make the iPad a usable replacement for a MacBook Pro. But will it work for you?

Many people could perform all of their tasks on an iPad without an external keyboard, but since the release of iPadOS 13, I have spent a fair amount of time working on my 11″ iPad Pro with a keyboard. I purchased a Studio Neat Canopy, a sort of keyboard case that also serves as an iPad stand, that works with an Apple Magic Keyboard. (You could also use Apple’s Smart Keyboard Folio or Smart Keyboard, depending on which iPad model you have.) 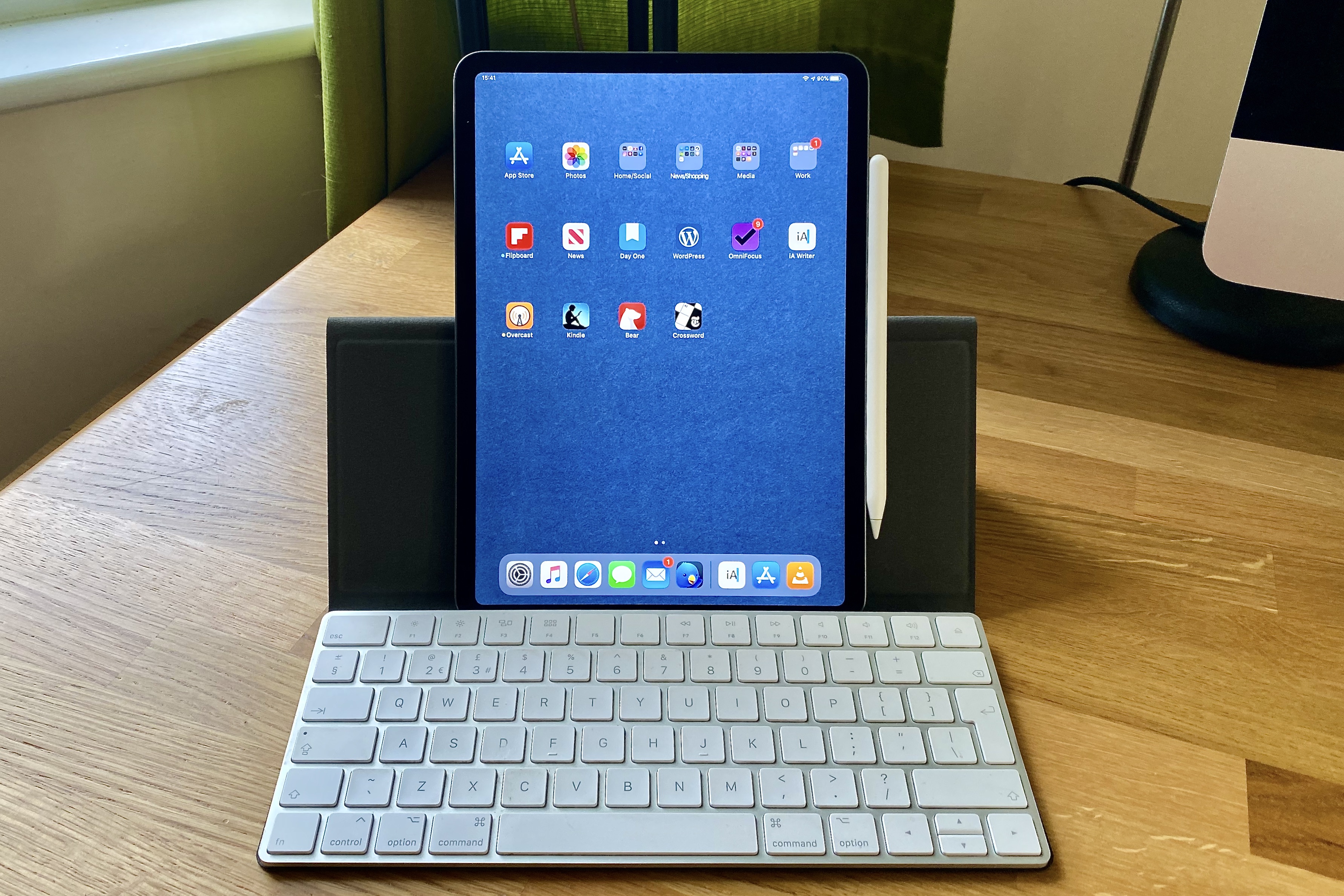 With the improved keyboard shortcuts and other features mentioned above, this is a powerful combination, especially with the addition of the Apple Pencil. It’s easy to switch apps by pressing Command-Tab, as you do on a Mac, and all the apps I use offer keyboard shortcuts to make working with this device more efficient. You can also switch the keyboard layout, which you cannot do with the on-screen keyboard. I use a Dvorak layout on my Macs, and it’s good to be able to use that with a keyboard for my iPad.

Or, with the new Magic Keyboard for iPad, you can use your iPad almost like a laptop. 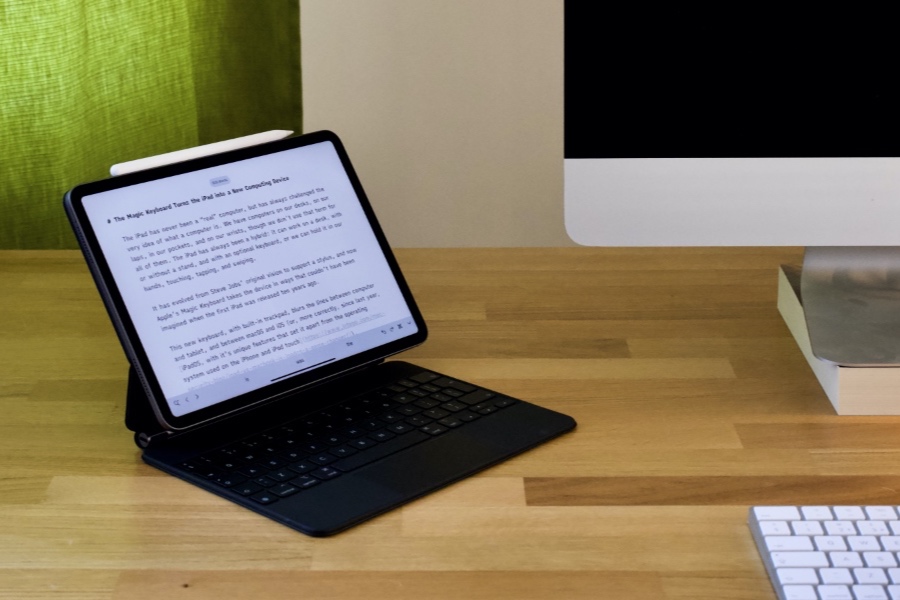 If you write a lot, as I do, then an external keyboard is essential. As a touch typist, there’s no way I can input text into my iPad as quickly without a keyboard. However, the new Voice Control feature in iPadOS 13, and the dictation feature that has been around for years, can make entering text a lot easier, if you’re in a quiet environment.

If you want to save weight, then the iPad may be a better choice. My setup, with an 11″ iPad, an Apple folio cover, keyboard, and Apple Pencil, weighs 1043 g. (With the 12.9″ iPad Pro, add about 200 g.) You can save a couple hundred grams by using Apple’s Smart Keyboard Folio, but this device is expensive, and not everyone will like the feel of the keys. The lightest Mac laptop, the MacBook Air, weighs 1025 g, and my 13″ MacBook Pro weighs 1353 g. However, if you do want to use a lot of the multi-tasking features of iPadOS, you’ll probably want the larger, heavier, more expensive 12.9″ model, which is a lot closer to the Mac in size, weight, and price.

But even with a keyboard, the main problem with the iPad compared to a laptop is one of ergonomics. While you can control a lot with the keyboard, you’ll still need to tap the screen—a lot. This can be uncomfortable over time, and even lead to repetitive stress injuries. This is known as gorilla arm syndrome, because your arm starts to ache and feel oversized. Steve Jobs once said about vertical touchscreens, “after a short period of time you start to fatigue, and after an extended period of time, your arm wants to fall off.”

One way to avoid this would be to switch from using a hardware keyboard when necessary to using the iPad in your hands when possible. And unless you are typing a lot, a handheld iPad may be better ergonomically. (Unless you are, say, watching a video, in which case a stand is probably better.) One way Apple could remedy this is to add full pointer support, so, when working with an iPad and keyboard at a desk, you can use a mouse. You can already sort of do this, with an accessibility feature called Assistive Touch, but this merely puts a virtual fingertip on the screen, not an actual pointer. It notably does not allow you to edit text efficiently.

In the end, it comes down to exactly what type of work you do on your computing device. If all you do is email, web surfing, and a few apps, then the iPad is a perfect replacement for a laptop. It’s smaller, lighter, and easier to use. If you do occasionally need to type a lot, then an external keyboard extends its capabilities.

However, if your work involves using a cursor a lot, then the need to touch the screen often—in cases where you can’t move around using the keyboard—is likely a deal-breaker. And if you are accustomed to using specific macOS apps that don’t have iOS or web equivalents, then you really can’t go tablet unless you are willing to completely reinvent your daily workflow.

This week on the Intego Mac Podcast episode 108, Intego’s experts will discuss whether an iPad can replace your MacBook, as well as a new “Light Commands” attack against Siri-enabled devices, and Apple’s privacy policy page update. Be sure to subscribe to make sure you never miss the latest episode.