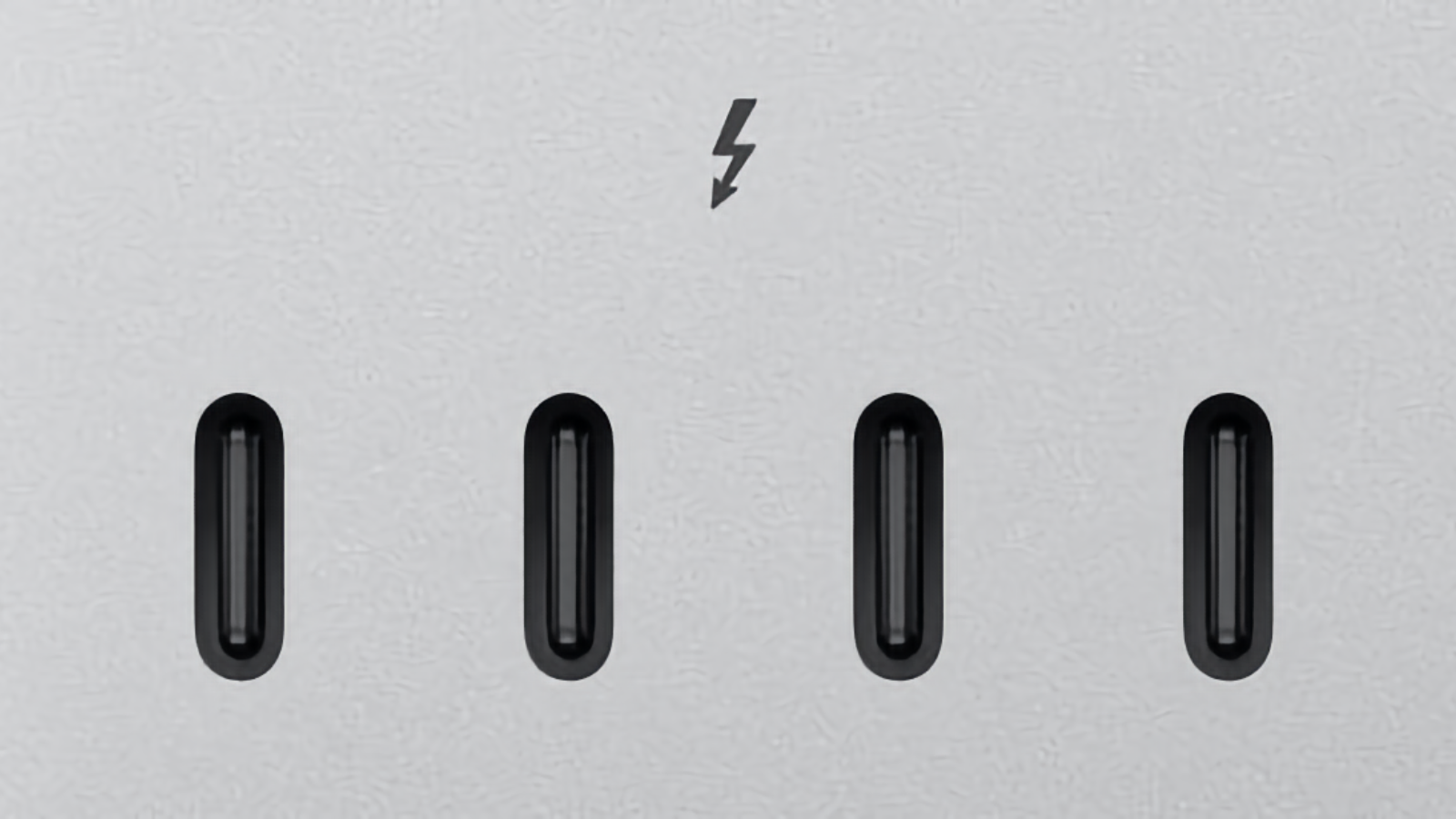 The ports that you use to connect keyboards, mice, and hard drives to your Macs have changed over the years. Current Macs have USB-C, which provide standard USB speeds, along with faster Thunderbolt to compatible peripherals. But what’s the difference between USB-C and Thunderbolt ports, and how can you tell them apart? And which cables do you need to get the most out of them?

In this article, I’m going to explain what Thunderbolt and USB-C ports are, how to identify them, how they work, which features they offer, and how to choose the right cables for your needs.

The history of personal computing has been marked by a series of milestones in data transfer capabilities. The earliest Macs could connect to cassette decks at paltry speeds. The 1983 Lisa had a serial port; this was long standard on computers to connect to peripherals. It also had a parallel port, to connect to a printer.

The Macintosh Plus added a SCSI port in 1986. This small computer system interface was a lot more flexible: it had faster throughput than previous ports, and you could daisy-chain devices. Mac users lived with these limited options until 1998, when the iMac added USB ports. The first USB ports were slow, but this was a revolution.

In late 1999, the first iMac with FireWire (also known as IEEE 1394) was released, although you could add a FireWire card to some Macs before then. This was the first taste of fast (for the time) data transfer on Macs. The FireWire 400 port ruled for years, and was supplanted by FireWire 800.

The numbers 400 and 800 indicated speeds in megabits per second, abbreviated Mbps. Note that data transfer speeds are usually measured in bits—not bytes—per second. One bit is one-eighth of a byte, so a 400 Mbps interface implied that you could theoretically transfer a 50 MB (megabyte) file in about a second (real-world speeds were somewhat slower, however).

Although USB 2.0 had a theoretical speed of up to 480 Mbps, FireWire was still faster at sustained data transfer.

FireWire ruled until USB 3 was added to Macs in 2011. This protocol provided data transfer rates of up to 5 Gbps (gigabits per second), and the ability to send data to displays. (Note that 1 Gbps is equivalent to 1,000 Mbps.) At the same time, Macs started including Thunderbolt ports, with 10 Gbps throughput. Thunderbolt 2 came along in 2014, with up to 20 Gbps, and Thunderbolt 3, in 2017, offered up to 40 Gbps. Today’s Thunderbolt 4 maintains that throughput, but adds other features, notably to connect more displays and provide high power to charge devices.

What’s the difference between USB-C and Thunderbolt?

Since Thunderbolt 3, the Thunderbolt protocol now uses USB-C style ports and cables. And that can be a problem; it’s confusing to have different but related technologies that share the same connector.

You used to know that if you could connect a USB cable, it would be able to transfer data at the speed of the USB interface. USB-C cables are different: some transfer more or less data, some also send power, at varying wattages, and some are actually Thunderbolt cables, supporting all of that protocol’s features.

And, by the way, the USB standard is now up to USB 4, which provides up to 40 Gbps throughput just like Thunderbolt 4.

The now ubiquitous USB-C port comes in many versions. Here’s an example of the current 24″ iMac. The less expensive model, at the left, has two ports, both Thunderbolt / USB 4. The more expensive model has four ports, two of which are only USB 3. You can tell these ports apart by the small Thunderbolt symbol above them, but, in practice, since you may not be able to easily look behind your Mac, you have to remember that, on the four-port iMac, that they’re the ones furthest from the edge. 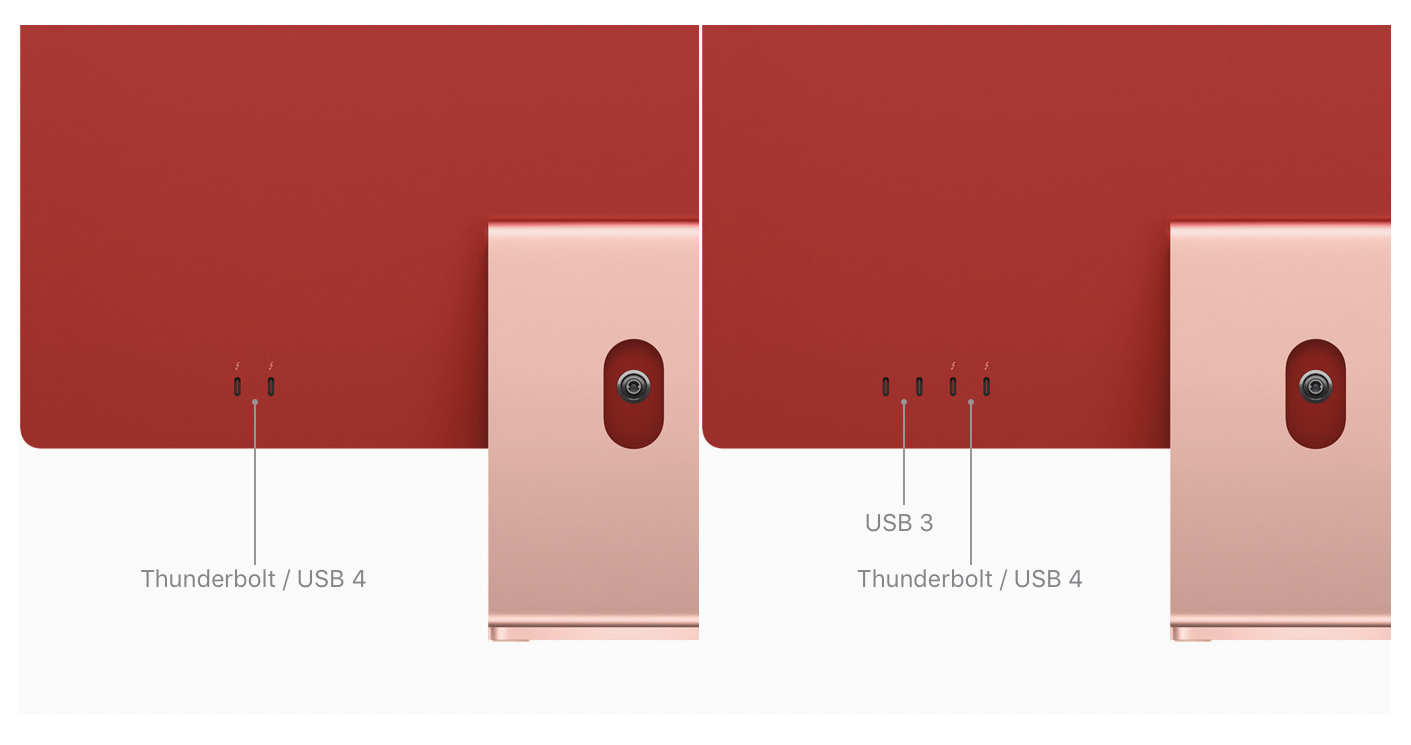 I mentioned the different data transfer speeds above, but there’s another factor to consider: how much power these ports provide. USB 3 and 4 ports can send from 4.5 W to 240 W, and Thunderbolt 3 and 4 can send 15 W, with Thunderbolt 4 providing one 100 W port on a computer. And this is bi-directional; you can charge a laptop by connecting a USB-C cable from a charger, and you can power peripherals, such as portable hard drives, using power from the laptop. You think this is confusing? Have a look at this USB-C cable logo chart.

All USB-C cables, regardless of their data throughput and power rating, look alike; there’s no way to tell, when you look at a cable, what it is capable of. Manufacturers are starting to add logos, similar to the ones above, to cables, but I bet you probably have a lot of USB-C cables already without logos. For example, if you see something described as a “charging cable,” then it’s not rated for data throughput. And some cables that are designed to send and receive data may only support low power levels.

And I haven’t even touched on using these cables with a display; while some displays can work with USB 3 connections, it’s more likely that a high-resolution display will require Thunderbolt. For example, to connect to Apple’s new Studio Display, you need a Thunderbolt 3 cable or better; this is, in part, because the display also provides 96 W power, so you can, for example, connect a MacBook Pro and use the display while charging the laptop.

How to choose the right cable?

It can be confusing to choose the right USB-C cable. If you need a Thunderbolt cable, it generally has the Thunderbolt logo, so you can be sure that it supports this protocol, but not at which speed. Thunderbolt cables also deliver power, though different cables will provide different wattages. While Apple’s cables are more expensive than those of other manufacturers, you can’t really go wrong if you buy a Thunderbolt cable from Apple. The specs are clear, so you know what you’re getting.

For plain USB-C, it’s a bit different. If you have a recent iPad, and still sync content from your Mac, then you know that it’s quite slow. This is because the charging cable Apple provides only goes up to 480 Mbps. If you sync often, you should get a cable that provides both power and better data throughput. The same is the case for the USB-C to Lightning cable that Apple provides with iPhones, though the lightning protocol doesn’t offer higher throughput.

With more recent USB-C iPads, you can transfer data faster, even at Thunderbolt speeds, but you’ll need to buy a cable that supports these higher speeds; Apple doesn’t include one in the box. Since Thunderbolt cables are backwards compatible with older USB standards, it’s a good idea to buy one of those, which you’ll be able to use, in the future, with other devices, rather than navigate the confusing array of cables available. It’s more expensive, but you know it will work. You can buy Apple’s cable, or cables from a number of familiar, trustworthy brands, such as Anker, CalDigit, OWC, etc.

For many people, the ports on their Macs aren’t enough. With only two ports on the entry-level iMacs and laptops, and still just four on the more expensive models (with the exception of the Mac Studio), it doesn’t take long before you need more. You can use a Bluetooth keyboard and mouse, but if you have other peripherals for interacting with your computer, such as a graphics tablet, that’s one port used. Do you use an external hard drive to store files or back up your data? That’s another port. And if you want to keep a cable connected to your Mac to charge your iPhone or iPad, that’s another one. These few ports get used up quickly.

In addition, it’s likely that many of your peripherals are not USB-C, but rather USB-A (the standard flat connector), requiring dongles to make the conversion. In general, dongles shouldn’t affect the speed or power going through the cables, but some may. If you need a USB-C to USB-A hub, make sure it supports at least USB 3.0, and preferably USB 3.2 (though this is only really necessary if you connect disks to the hub).

There are also a number of hubs that split out a single thunderbolt cable into as many as a dozen ports or more. These hubs often have a wide variety of ports, not all of which will be useful. For example, CalDigit’s Thunderbolt Station 4 offers 18 ports, including five USB-A for older peripherals, an Ethernet jack, audio in and out jacks, a display port, and two SD card slots, along with four USB-C ports. Devices like this are a great way to extend your Mac, though they are expensive, and you will likely not use all the ports on the device.

With every change to the connections we use with computer peripherals, there are difficulties adapting. After a wide array of plugs and jacks, it looks like USB-C is here to stay, at least for a while. The fact that this plug can handle both USB and Thunderbolt, and offers backwards compatibility, means that it should be easier to manage over the years. For now, however, you probably have plenty of peripherals that don’t use USB-C, and depend on hubs and dongles, but over time, you’ll be able to use all your external devices with this type of plug.