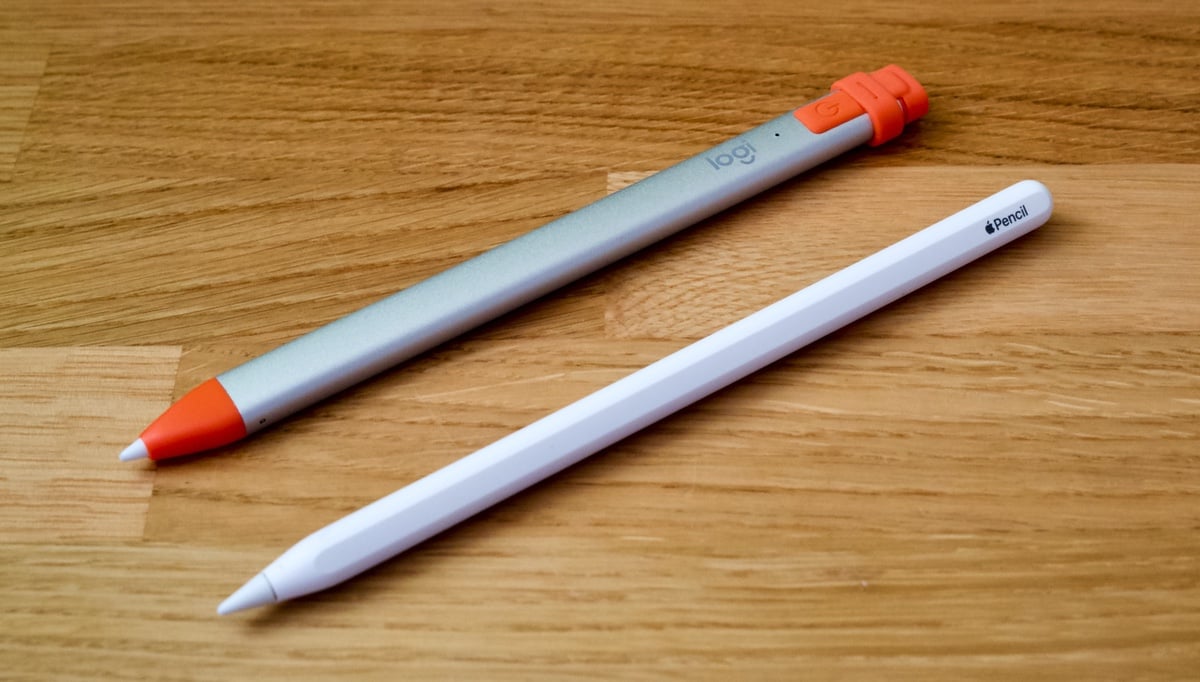 Steve Jobs famously said, about tablets, “If you need a stylus, you’ve already failed.” But he was talking about using a stylus as the main input device for a tablet. When Apple released the Apple Pencil in 2015, this quote was revived to remind people that a) things have changed, and b) Steve Jobs wasn’t always right.

In 2018, Apple released a second version of the Apple Pencil, with more advanced features designed for the then-new iPad Pro models. Logitech, meanwhile, sells the Crayon: a less expensive version of the pencil that’s compatible with certain iPads.

In this article I’m going to tell you everything you can do with the Apple Pencil, and the Logitech Crayon.

The first-generation Apple Pencil works with a wider range of iPad models, some of which date back to 2015:

The Logitech Crayon is compatible all iPad models from 2018 or later. Logitech has just released a new model, which has a USB-C connector, replacing the Lightning connector that was on the original model. Both versions of the Crayon are still available, but if you’re buying one now, it’s probably best to go for USB-C, since it’s going to be the standard going forward.

The original Apple Pencil has an odd way of charging: you remove the easy-to-lose cap and stick it into a Lightning port (on an iPad or iPhone). That’s right, the Pencil just sticks straight out from the iPad—risking damage to both devices if you aren’t careful.

The second-generation Apple Pencil connects magnetically to one side of the iPad Pro and powers up using induction charging. This also gives you a practical way to carry the Pencil with your iPad. The magnet is strong, but I’d still be careful if you’re carrying the iPad with its Pencil out in the open (i.e. not placed together in a case).

To charge the Logitech Crayon, pull back the silicone cap at the end and connect a Lightning cable or USB-C cable, depending on the model.

The main difference between the Apple and Logitech devices is that the latter doesn’t have pressure sensitivity—which is important if you’re creating detailed drawings on your iPad. However, if you tilt the Logitech Crayon, it does make thicker lines. This means that for basic note-taking and other general uses, the Crayon may meet your needs. But if you’re an artist who wants a tool for drawing digital artwork, you’ll almost certainly want the Pencil.

The original Apple Pencil was round all around, meaning that it would roll on a desk or table that wasn’t perfectly level. The new model has one flat side, preventing unwanted movement. This change is a no-brainer; the round pencil was perhaps attractive from a purely aesthetic perspective, but it was impractical. The newer Pencil also has a matte finish, which is easier to hold and less slippery than the first model. Meanwhile, the Logitech Pencil has an oval-shaped body; it’s quite wide, which may not feel comfortable to everyone, but it does stay flat on a table.

Setup for all of these devices is simple. Make sure Bluetooth is turned on. With the first-generation Apple Pencil, remove the cap, then plug its lighting connector into your iPad, then tap the Pair button. For the second-generation model, place the Apple Pencil on the magnetic side of the iPad. The iPad will immediately recognize the Pencil and pair with it. When you connect the Apple Pencil, the iPad briefly displays how much charge the device has.

For the Logitech Crayon, press and hold its power button for a second or two, until the tiny LED next to the button lights up, then start writing. It pairs automatically.

There are a few settings for the Apple Pencil, including one setting specifically for the second-generation model. You can double-tap the bottom third of the screen to effect a change. In Settings > Apple Pencil, you can choose whether this “gesture” switches between the current tool and the eraser, between the current tool and the last one you used, or shows the color palette. 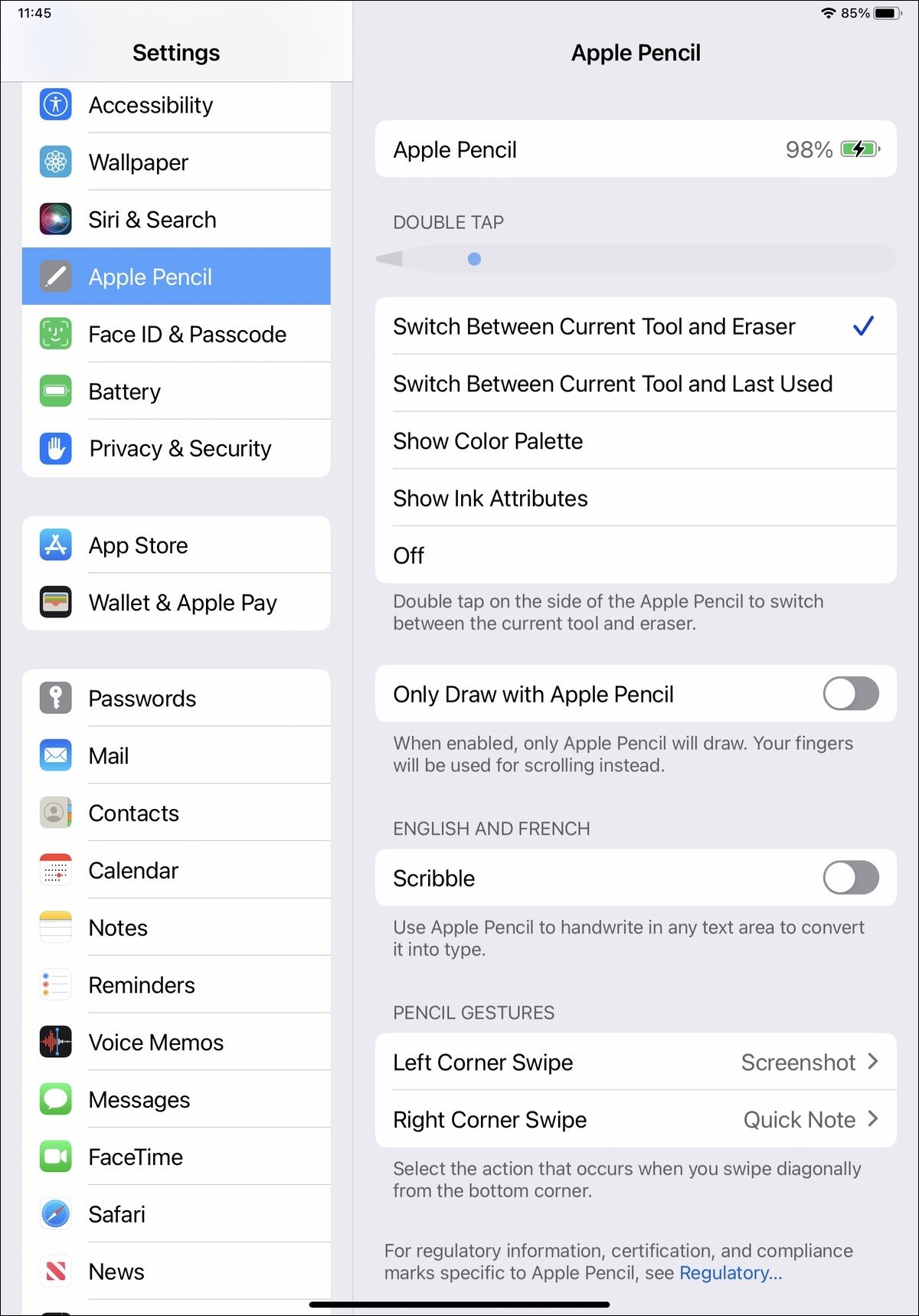 Other settings let you tell your iPad to only use your Apple Pencil or Logitech Crayon to draw. There’s a setting to activate Scribble, which we’ll discuss in the next section.

With the introduction of iPadOS 14 came Scribble, an innovative feature that takes advantage of the Apple Pencil or Logitech Crayon. Scribble lets you write on your iPad in any text area. While at first this might remind long-time aficionados of the Apple Newton’s handwriting recognition of the mid-1990s (famously lampooned on The Simpsons) it’s actually much more advanced than that.

With Scribble, you can use your Pencil or Crayon to write directly in Safari’s address bar, compose emails, and use smart selection to select, cut, and paste text converted from your handwriting. iPadOS uses data detectors to recognize phone numbers, dates, and addresses, so you could, for example, write a phone number, then tap it and call it.

Scribble isn’t just for writing words and number, though. It also recognizes shapes, so if you want to, for example, create a flow chart, your squares, circles, and triangles will be converted into clean shapes.

To use Scribble, just write—anywhere. If you write in Notes, you can tap the pencil icon with the A at the bottom of the window, then write; this tells Scribble to convert whatever you write with your Pencil or Crayon into text.

The best way to see how Scribble works is to go to Settings > Apple Pencil, make sure Scribble is enabled, then tap Try Scribble. The tutorial shows what you can do with Scribble. It even works with my very messy handwriting, as you can see.

Getting started with Notes

Apple’s Notes app is the perfect way to start using the Apple Pencil or Logitech Crayon. Create a new note, then tap the Markup icon at the top right of the screen.

Notes displays a set of tools at the bottom of the screen. You can now begin to draw or even write text. The iPad Pro offers excellent palm rejection so it doesn’t think you’re writing with your entire hand.

There are four drawing options: from left to write they are a pencil for handwriting recognition, a pen, a felt-tip pen and a pencil. To the right of that is an eraser, then a selection tool. Tap one of these to activate them. Tap again and you can choose the thickness of the lines and the saturation of the color.

If you want to use Scribble for handwriting recognition, tap the pencil with the A. Start writing, and Scribble will convert your handwriting to text. Use the gestures presented in the video above to erase, select, and edit text.

To add drawings in your notes, switch to one of the other tools. You have a choice of colors, with black and the primary colors immediately available; tap the color wheel to choose a different color.

If you want to draw perfect shapes, such as circles and squares, draw the shape you want, and, at the end, don’t lift the pencil right away; you’ll see the shape snap into a perfect circle or square.

You can use the eraser tool to erase anything you’ve drawn. To use it, just tap the eraser it in the tools palette. (Or, if you have the second-generation Apple Pencil and you’ve set that option, double-tap in the lower third of the display to switch to the eraser tool.)

Use the selection tool to select an element, then tap and drag it to a new location. The selection tool doesn’t give you a fine selection; it selects entire objects that you’ve drawn. Note that the undo and redo buttons at the bottom left of the screen allow you to step backward and forward in your actions.

Here’s a great tip if you use Apple Notes. If your iPad is locked, tap the screen to wake it up; you’ll jump directly to your choice: a new note, the last note you viewed, or the last note you created. You can select your preference in Settings > Notes > Access Notes from Lock Screen.

You can also use it as a stylus

While the Apple Pencil and Logitech Crayon aren’t primarily intended to be used as styluses to control the iPad, you can use them as such. For some apps, this can be very practical. You can tap buttons, drag sliders and select objects. This is great for editing photos, for example, because it is a lot easier to tap some of the small icons in complex editing apps with the Pencil than with a finger.

You can navigate the iPad Pro with the Apple Pencil or Logitech Crayon performing just about every action with the stylus. I find it particularly useful for doing the New York Times crossword. The only things you cannot do are return to your home screen or switch apps (you need to swipe up from the bottom of the device with your finger), or display Control Center (swipe down from the top right) or notifications (swipe down from the top left).

You can annotate PDFs using the Apple Pencil or Logitech Crayon. This can be done either using the iOS Markup tools or with one of many such apps available for iOS. Open a PDF, tap the Markup icon and draw. You can also sign PDFs using these devices. 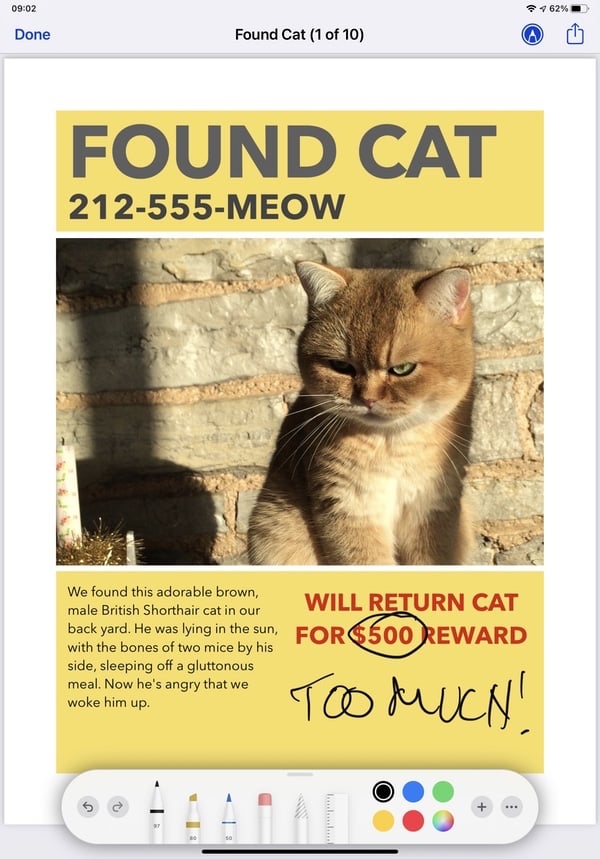 One of my favorite uses for the Apple Pencil or Logitech Crayon is editing text. Text editing on an iOS device is clumsy at best; it’s hard to select items and it’s even harder to drag the little lollipops at the beginning and end of a selection. With the Apple Pencil, I can easily edit texts I write, select and move text, or delete text. I sometimes use the pencil to tap letters on the keyboard when I’m fixing typos or adding short words. 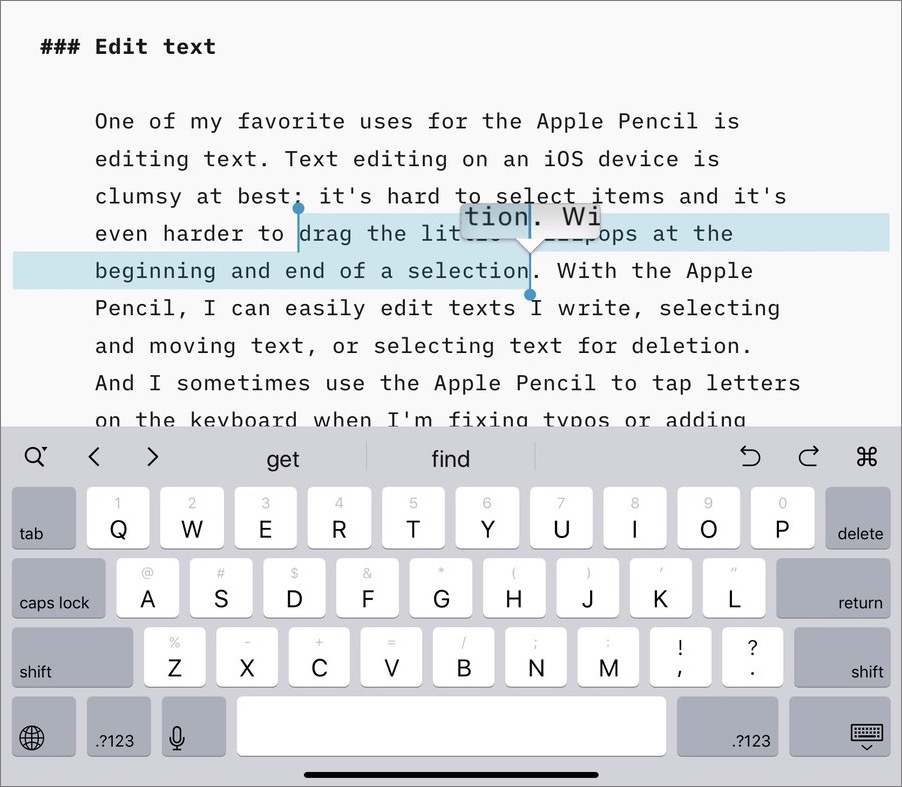 If you have an iPad, the Apple Pencil or Logitech Crayon is a worthwhile addition to the device. Even if you don’t draw, you may find lots of uses for your pencil device. It may help you streamline your work with the tablet.