As smart speakers go, Apple’s HomePod has a few points that make it stand out. It has better sound than most Alexa and Google Home devices. There are a number of smart speakers made by audio companies that focus on sound quality, and that include the ability to use one or more of the voice assistants, but the HomePod is the only smart speaker that uses Siri. If you’re in the Apple ecosystem, this is a compelling reason to use it.

In this article, I’m going to tell you what you can do with your HomePod: how you can tell it to play music, give you information, make phone calls, and more.

How to set up an Apple HomePod

To set up your HomePod, go to the Home app on an iOS device, tap Rooms, select the room where you’ve assigned your HomePod, then press and hold on the HomePod’s tile. A play controller displays; swipe up, or tap the gear icon at the bottom of the screen, to see the device’s settings. On the Mac, right-click on the HomePod’s tile and choose Settings.

You’ll see a number of settings here, such as the name of the device, the room where it’s located, and the account it uses to access both music – if you have Apple Music, or use Cloud Music Library – and your personal information.

Swipe down a bit to see more settings:

Here, you’ll see Siri settings, location settings, and more. If you want to be able to use Hey Siri, you can toggle it on here; if not, you can enable a setting to access Siri by tapping and holding the top of the device. (And if you do this, you don’t need to say “Hey Siri” with each command.) You don’t have to use Siri; if not, you will only be able to play music on the device by sending it from an iOS device or a Mac.

How to play or stream music on a HomePod

Obviously, the HomePod’s main use is to play music. You can do this with Siri in a number of ways. For example:

You can also have Siri play your “personal radio station” if you use Apple Music. Just say, “Hey Siri, play some music.” This will play a selection of music from your music library, music you have loved, and some related tracks. It’s a good way to play music when you don’t know what you want to listen to.

How to send audio to a HomePod via AirPlay

But what if you want to play some music on your iPhone, or play music from another app, such as Spotify? Since the HomePod is an AirPlay speaker, you can stream music to it. To do this, start playing some music, then tap the round AirPlay icon at the bottom of the play screen. You’ll see an interface like this; choose which speaker(s) you want to play the music on. Here, I’m streaming music from my iPhone to the HomePod in my living room. 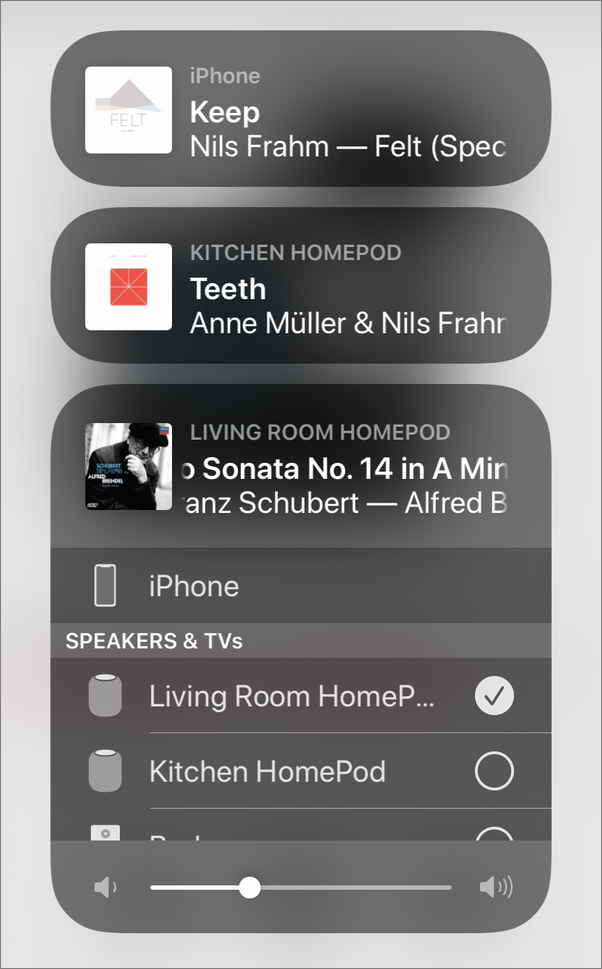 Since I don’t like having Siri active on my HomePods, I select music on my iPhone or iPad, then stream it to the HomePod in this manner.

Another way to do this is to start playing music on your iPhone, then bring the iPhone a few inches from the HomePod; this will “hand off” the music to the HomePod, streaming it from that speaker.

Note that, in the above screenshot, the AirPlay interface allows you to play music and stream to multiple speakers, so if you have HomePods, or other AirPlay speakers in multiple rooms, just tap each one to select them.

While playing music on a HomePad, you can tell Siri to pause the music or resume it, skip tracks, and you can also control the volume. The HomePod has a seemingly miraculous ability to hear commands, even when the music is loud. You can use the following:

There are lots of other Siri commands you can use for music; see this Apple document for more.

How to play podcasts and other audio on HomePod

The HomePod can also play some ambient sounds, such as rain, stream, forest, ocean, white noise, fireplace, and night. Say, “Hey Siri, play forest sounds” to have a relaxing background.

How to control your home with HomePod

Anything you can do with Siri on an iPhone or iPad is also available via the HomePod, and this includes controlling smart devices in your home. For example, if you’ve set up some smart lights in the Home app, you can tell Siri to turn them on or off:

Siri can control any HomeKit compatible device; see this Apple document for more on the Home app and Siri.

And as we mentioned in another recent article, you can even use your HomePod as a HomeKit hub:

Use Apple HomeKit to automate and secure your home

The HomePod can also handle “personal requests,” which means it can work with your messages, reminders, contacts, calendars, and notes. To use this feature, you must turn on Personal Requests in the settings; see the second screenshot above.

One Siri feature that I use all the time is reminders. When I’m cooking, and need to perform a task, I have Siri remind me. I say, “Hey Siri, remind me to check the oven in 20 minutes.”

But Siri can also do lots more. Here are some examples:

You can also set timers; this is great in the kitchen. Say “Hey Siri, set a timer for three minutes,” so your boiled eggs will be just exactly right.

For more about using Siri on the HomePod, see this Apple document.

How to make and answer phone calls on the HomePod

The HomePod can’t make phone calls itself, but if you have your iPhone nearby, it can function as a speakerphone. If your phone rings, say, “Hey Siri, answer the phone,” and you’ll be able to talk to your correspondent. When you’re finished, say “Hey Siri, hang up,” or tap the top of the HomePod.

As you’ve seen above, the HomePod is a great way to play music but is also a powerful tool for using Siri. Learn about its many features so you can leverage it to make your day smoother.

To learn more about the Apple HomePod, be sure to check out our full review here:

Each week on the Intego Mac Podcast, we discuss topics like the ones covered in this article, as well as the latest Apple security and privacy news. Be sure to subscribe to make sure you never miss the latest episode!