Apple’s HomeKit controls many smart home devices: from lights to thermostats, from doorbells to home security systems. Many users may never see the Home app, while others may use it regularly with dozens of devices, and can use Siri to turn these devices on and off.

HomeKit has slowly grown since its introduction, and Apple has expanded its reach through new devices. Yet they don’t publicize this much. One technology, called Thread, enhances the way smart home devices can work, and two Apple devices – the Apple TV 4K and the HomePod mini – provide special features for Thread networks.

In this article, I’ll explain what Thread is, why you should care, and how the smart home is getting smarter.

Apple’s HomeKit and the smart home

HomeKit was designed to interface with Siri; you can give commands to your iPhone, iPad, Mac, Apple Watch, or HomePod to activate or disable devices in your home. Read more about HomeKit in Use Apple HomeKit to automate and secure your home.

HomeKit works in the background; all you do is add smart home devices and HomeKit manages them. You do need a HomeKit hub to be able to access your devices remotely, and this can be any HomePod, Apple TV (4th generation or later), or iPad. 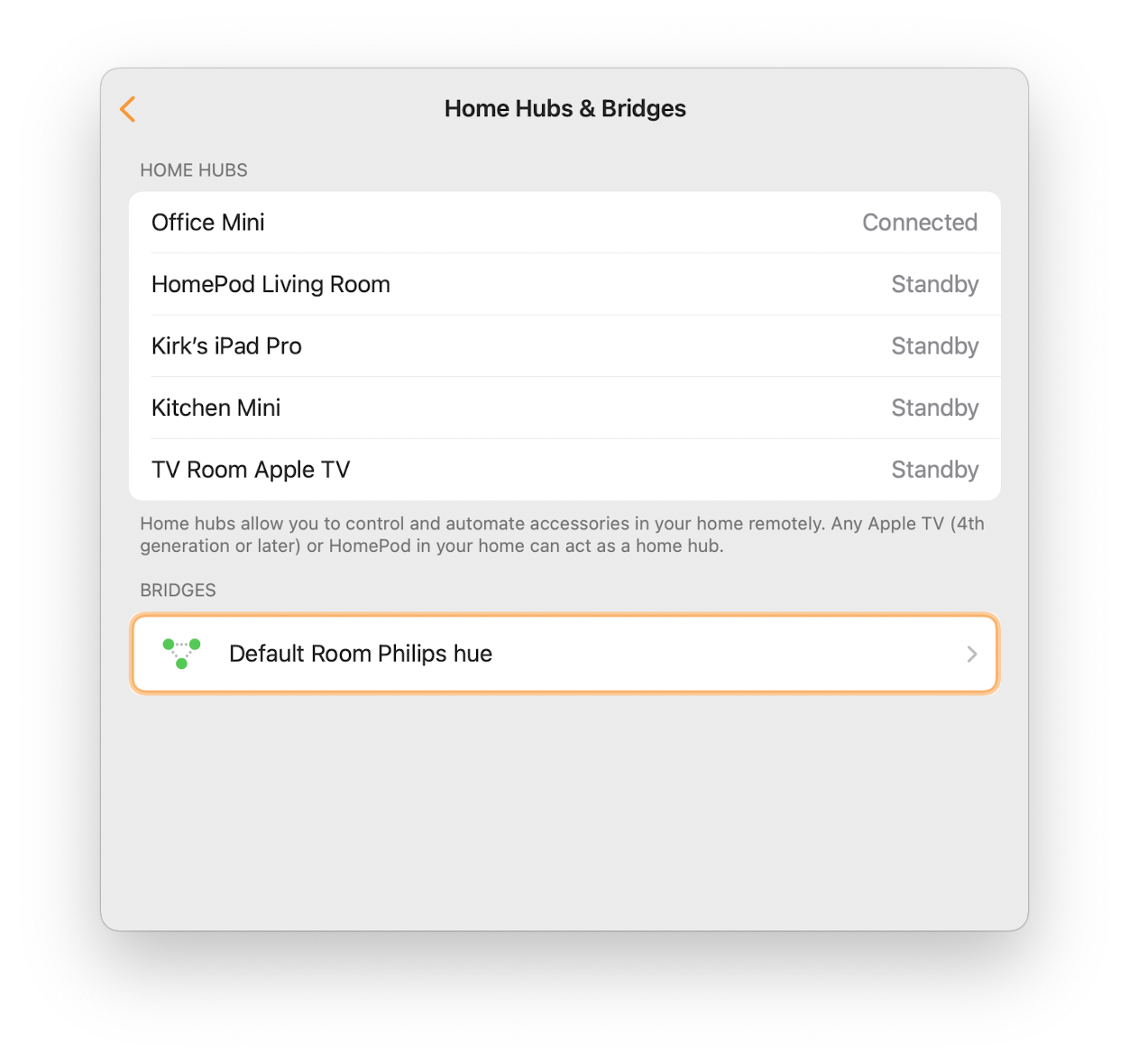 Many smart home devices operate over Bluetooth Low Energy, but this means that they can only connect to a single device, and only on demand. When you want to turn on a smart lightbulb that uses Bluetooth, for example, you can do so using an app on your iPhone, but, since these Bluetooth devices can’t connect to wi-fi, you can’t control them remotely. (Some devices get around this by using hubs that connect to wi-fi. For example, I have Philips Hue light bulbs that required a special hub when I first bought them years ago. You can now buy Philips Hue light bulbs and control them via Bluetooth, but only when you’re close to them.)

Thread is a technology for the smart home that uses low-power mesh networking and IPv6 addressing to connect smart home devices. The goal of this is to do away with product-specific hubs, and allow smart devices to interact over a wi-fi network. In addition, some Thread capable devices can extend the network outside the home, to provide remote control of your devices.

An endpoint is a device that sends and receives data to the Thread network, but can’t pass data onto other Thread devices. Endpoints are devices like thermostats, weather sensors, or security devices. These devices are generally battery powered, and do not route data from other devices.

A router is a powered device, such as a smart plug; it works like a router in a mesh wi-fi network, sending and receiving data, and extending the range of the network; it can also be an endpoint device.

A border router is a device that links the Thread network to your wi-fi network, allowing you to control and access it remotely. This is the device that makes Thread so useful: it is a master router that sends and receives data across the Thread network, but also acts as the interface to your wi-fi network. Currently, two Apple devices can act as Thread border routers: the Apple TV 4K (2021 or later) and the HomePod mini. Apple hasn’t touted these features, though you will see Thread listed on the Tech Specs page for each device in the Wireless section. And this is probably why Apple has used this home set to present the HomePod mini; it’s likely that Apple makes more inroads into the smart home leveraging this device. 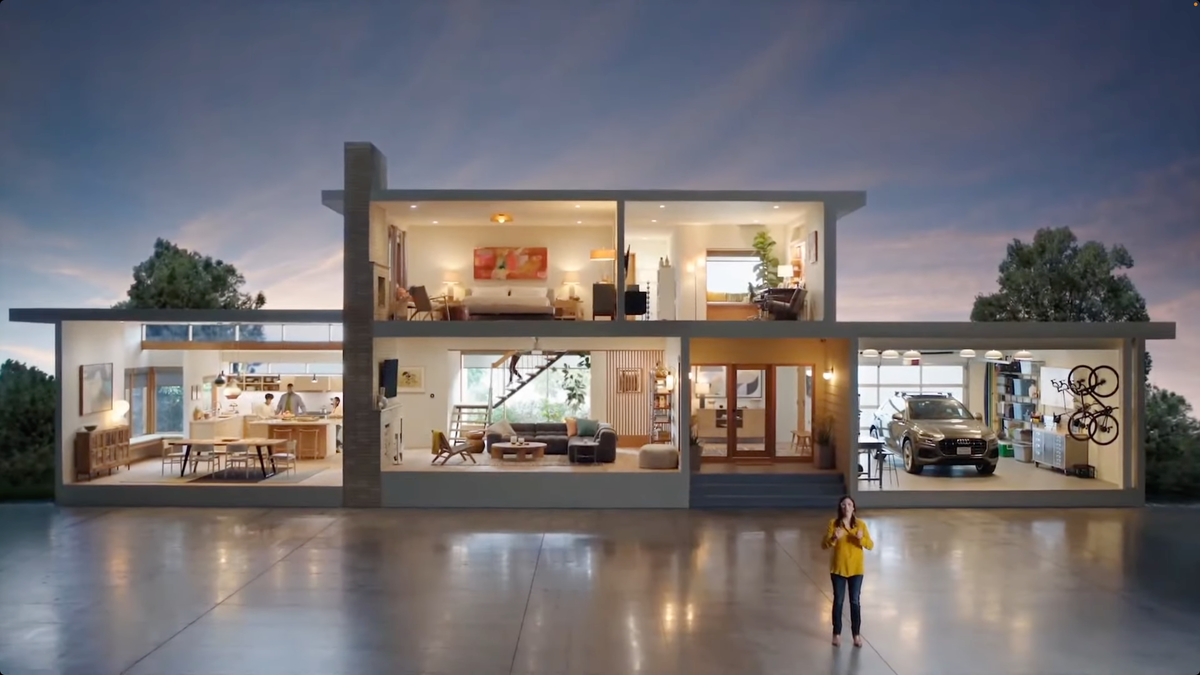 These two Apple border routers allow Thread devices to integrate a HomeKit network, appearing in the Home app, and responding to Siri commands and automations, and enabling you to obtain data from and control your Thread devices remotely.

It’s worth noting that the Apple TV 4K released in October 2022 comes in two versions. The cheaper, $129 model, does not have Thread support, so if you’re planning on getting an Apple TV to use with Thread, get the $149 model.

Other border routers are available from different companies, such as Nest, Nanoleaf, Eero, and Amazon’s 4th generation Echo speaker. Expect Thread support to come to more devices in the future.

Thread compatible devices are available from a broad range of companies, such as Amazon, Belkin, Eve, Google, Nanoleaf, and others.

I have several Thread devices in my home: an Eve Weather outdoor weather sensor, two Eve Energy smart plugs, and several Eve Thermo radiator thermostats. When I added them to my HomeKit network, they immediately created a Thread network, because I have an Apple TV 4K and a HomePod mini. 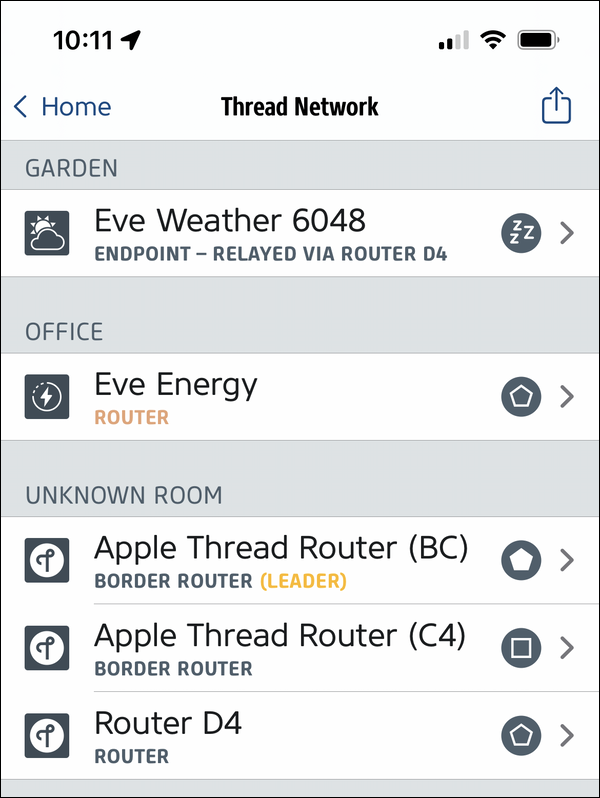 The weather sensor is positioned about 15 meters from my house, in a hedge so it’s out of the sun. It accesses the network by linking to my Apple TV, which is on the same side of the house, on the upper floor. Unlike older Bluetooth, which is limited to about 10 meters, these new devices have much longer range; this video from Eve shows that they were able to get an Eve Weather to connect 67 meters away from a router.

I could also use the Eve Energy, which is a router, to connect to the Eve Weather, and other Thread devices. In fact, when I took the Apple TV offline, the Eve Weather connected to the Eve Energy, even though the latter is on the other side of my house, with a couple of walls between it and my garden. This shows the resiliency of Thread networks; the more compatible devices you have, the better the network.

Another standard for smart home devices is rolling out. Matter is designed to leverage Thread and extend its capabilities, and has the support of major companies such as Amazon, Apple, Google, and others. This enhances the mesh networking and remote control of smart home devices and will make these devices more powerful and easier to use.

Up until now, the smart home was a complex mix of devices and standards; Thread has made this not only simpler, but more efficient, and Matter will build on this. With the mesh networking and increased range of Thread devices, together with an Apple TV 4K or a HomePod mini, your smart home will become a lot smarter.