On January 10, 2001, Steve Jobs went on the stage at Macworld Expo in San Francisco and presented a new app that would change the course of Apple. iTunes would become Apple’s most important app, not only because it was the companion of the iPod that would be released later that year, but also because it would become the framework for all of the company’s future online stores. (Watch the original presentation: part 1, part 2.)

iTunes was far from the first app of its kind; during the presentation, Jobs showed a few competing music player apps, and said "We’re late to this party and we’re about to do a leapfrog." Apple’s late catch-up would prove to be one of their best decisions.

Jobs explained the process of ripping and burning CDs, since, for many, this was new. He ripped a CD – the B 52s’ Time Capsule – then he imported a folder with 1,000 songs to his library. He then showed how to play music, how to sort the library, how to search for songs, and how to create a playlist; all of these were techniques that were new for most people.

Most important, iTunes was free.

The origins of iTunes

As Jobs said in his presentation, there were a number of programs that could play MP3s, and, on the Mac, there were two main options: SoundJam, sold by Casady & Greene, and Audion, from Panic. Both of these apps were simple, focusing more on the player aspect, even though they offered features such as playlist creation, ripping CDs, and syncing music to MP3 players.

Apple approached both companies, and eventually purchased SoundJam, along with its three developers (who still work for Apple). Panic, at the time, was in negotiations with AOL, and never actually met with Apple.

SoundJam didn’t look anything like iTunes; in fact, its player window was limited, and a lot of the work managing music and creating playlists was done in other windows. 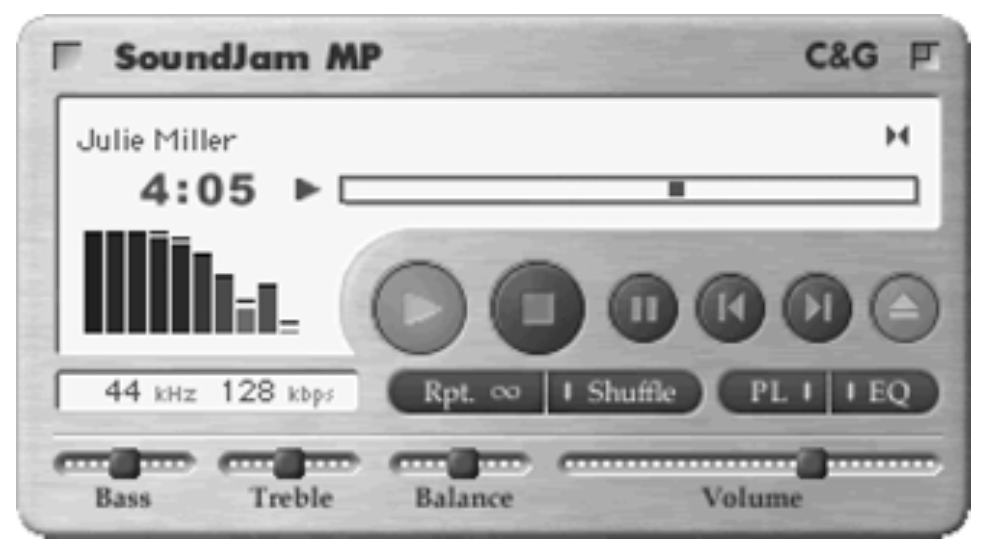 One of the key features of iTunes was, and still is, the fact that you can do almost everything in one window. While this can be limiting at times, it simplifies a lot of what had previous been a hodgepodge of different windows for different tasks. This single-window approach went on to become common with other apps – such as iPhoto, iMovie, etc. – and is one of the hallmarks of much Apple software.

The slow, steady progression of iTunes

It’s interesting to look back at the first presentation of iTunes, to see how little the iTunes interface has changed in twenty years. Aside from the fact that, on the Mac, it’s not iTunes any more – when Apple released macOS Catalina, they split it into four apps – the Music app is a direct descendant of the original iTunes. (iTunes still exists for Windows, with the same features as the previous integrated app on macOS.)

Over time, iTunes progressed, adding new, essential features, and keeping up to date with the needs of music listeners. Yet it maintained its familiar look – with numerous design tweaks – of a sidebar to navigate a music library, and a right-hand main window to see albums and songs.

iTunes 2, released in October 2001, embraced the new iPod. Not only could you copy music to the iPod, as you could to other MP3 players, but syncing could be automatic. New features included an equalizer, cross-fading of tracks, and the ability to burn MP3 CDs. Instead of being a separate download from apple.com, iTunes was now bundled with Mac OS X.

iTunes 3, in July 2002, adding smart playlists and support for Audible audiobooks. Many people forget, but the first personal digital audio player sold in any quantity was Audible’s MobilePlayer, released in early 1998. Audiobooks were becoming popular, because of the ease of listening to them on digital devices, rather than on stacks of cassette tapes or CDs. and Apple supported them both in iTunes and on the iPod.

Even though it had been around for three years, the iPod was still a niche device. But when iTunes 4 introduced the iTunes Music Store, Apple’s strategy started making sense. Now you could, with a few clicks, buy an album, download it to your computer, and immediately transfer it to an iPod. 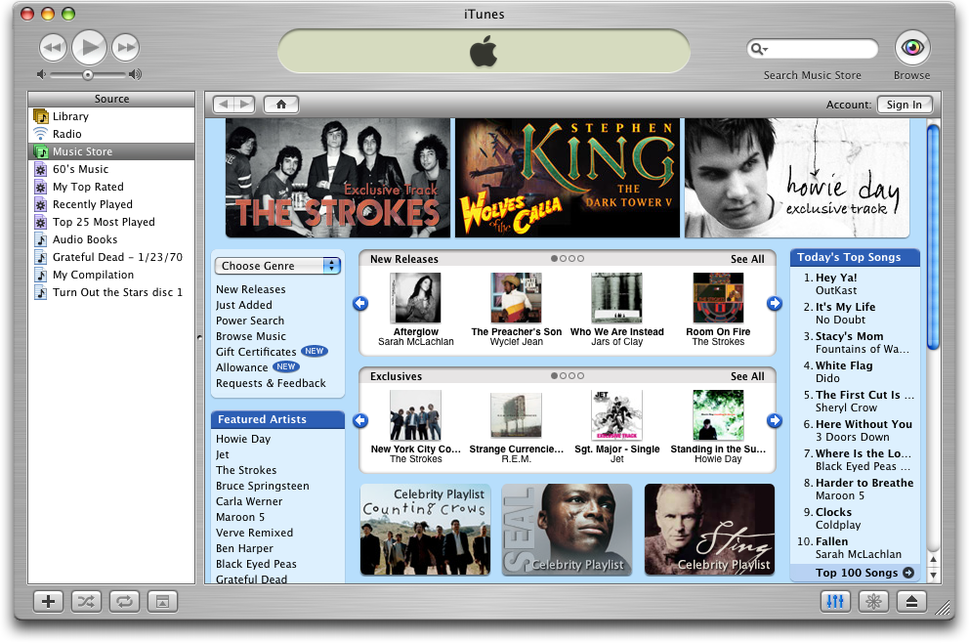 iTunes 4 also saw the addition of the AAC (MP4) format for music files, which Apple adopted, in part to use DRM protection on music files sold in the iTunes Music Store. Apple would later remove DRM on music, but they still use the same FairPlay DRM system for other types of content, and for music provided by Apple Music. And iTunes 4.9, released in June, 2005, added support for podcasts, helping to spur their growth by being the first comprehensive, easy to search repertoire of podcasts.

This addition of the iTunes Music Store increased iPod sales dramatically, as people discovered the ease of buying music online. This iPod sales chart from Wikipedia shows how the fourth quarter of 2004 was the start of the iPod explosion.

The next couple of years saw refinements to iTunes, with minor improvements, and some additional store features, including movie sales. In 2007, iTunes 7.2 introduced DRM-free music from the iTunes Store, which came after Steve Jobs had penned an open letter entitled Thoughts on Music early that year.

In early 2008, Apple added movie rentals to the iTunes Store, and iTunes 8, later that year, saw the addition of Genius playlists, together with a Genius sidebar, which didn’t last long. In this and the following version of iTunes, more types of content were added to the iTunes Store, and iTunes 9 saw a new, cleaner interface, together with the new Home Sharing feature, that allows users to share their libraries on their personal network.

iTunes 10, released in September 2010, saw one of Apple’s biggest failures in iTunes: the Ping "music social network." Ping, described by Steve Jobs as "sort of like Facebook and Twitter meet iTunes," was largely ignored, especially when it turned out that Apple hadn’t gotten approval from Facebook, and Apple had to pull that integration from the app. Ping was removed from iTunes two years later. 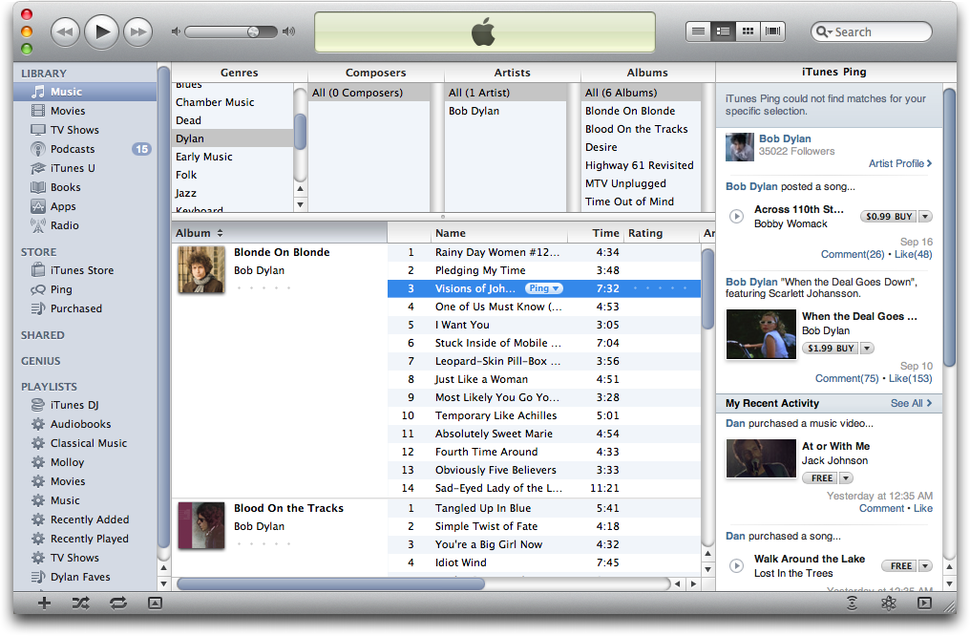 iTunes and the cloud

The next step for iTunes was to embrace the cloud. Apple added iTunes Match, which stores music in the cloud, in iTunes 10.5.1, released November 2011. With iTunes 11, you could play purchases from the cloud, and with iTunes 12, apple introduced iCloud Music Library and Apple Music. iTunes had become a portal to a broad media experience: music, movies, TV shows, podcasts, iOS apps, iTunes U, and eBooks, and the app was becoming complex.

In the initial unveiling of iTunes, Steve Jobs said, about other music player apps:

"They are too complex. They’re really difficult to learn and use. I’ve talked to so many people using them that don’t even know three-fourths of the features, because they’re too complicated."

iTunes had become too complex; even "bloated" according to some. The app had lots of annoyances, As the hundreds of Ask the iTunes Guy columns I wrote for Macworld attest, iTunes was anything but simple.

iTunes 12 was released in October 2014, and lasted, with the addition of many minor features and tweaks, for four years, until the release of macOS Catalina. iTunes, on the Mac, was split into four apps, corresponding to types of content, as on iOS. This led to a number of changes in the way users managed content on their Macs, but simplified media access for many users. 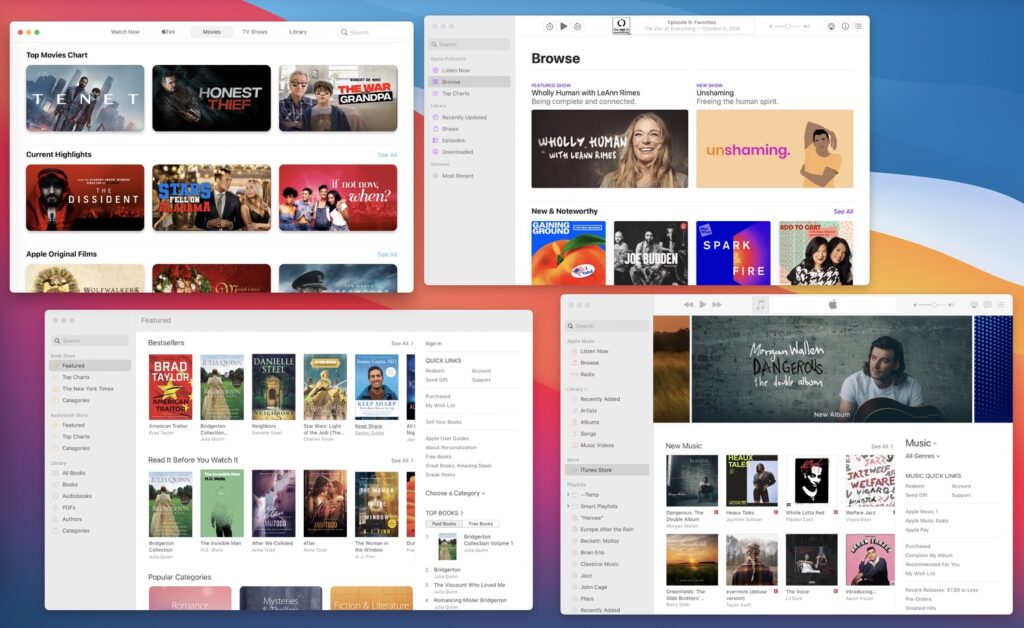 But iTunes still exists on Windows – it’s not clear whether Apple will split the app on that platform – and the iTunes Store is still the name of Apple’s digital media storefront. As more than one-fifth of Apple’s revenue comes from "services", the iTunes Store, and its spin-offs, are worth tens of billions of dollars a year. While services include a lot more than just media sales – they also include extra iCloud storage, AppleCare contracts, and more – this segment of Apple’s business began with the launch of the iTunes Store in 2004.

It’s clear that when Apple launched iTunes, the company had no idea how important this app would be, or what the ramifications would be for the company. But they were able to build on its success with the iPod, the iTunes Store, and the App Store, making iTunes the cornerstone of Apple’s success over the past twenty years.

While iTunes no longer exists on the Mac as a single app, it is arguably Apple’s most important software, other than its operating systems.