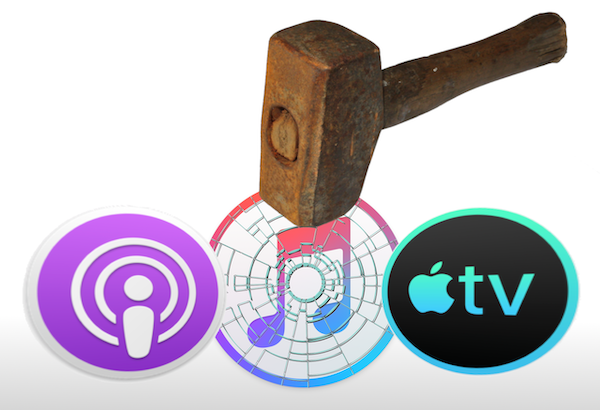 The press has gone wild with this story: many outlets are saying that Apple is killing off iTunes. On the BBC’s Business Live program this morning, one journalist announced that, “Apple is ending its iTunes music download service.”

The rumors have been abounding for some time; I discussed them in April in this article. Since Apple announced the company’s Apple TV+ service, it had been clear that there would be a TV app on the Mac, and leaks informed us that there would also be separate Music and Podcasts apps. But does this mean iTunes is dead?

What Craig Federighi announced yesterday at Apple’s Worldwide Developer Conference was that there will be three separate apps, as expected, and that syncing iOS devices, as well as updating them, backing them up, and restoring them, will be managed by the Finder.

The TV app will reproduce the features of the similar app on iOS and the Apple TV, grouping movies and TV shows, not only from Apple, but from other services. It will allow you to buy and rent movies and TV series, and will be your portal to viewing video.

The Podcasts app will be what its name suggests: an app similar to that on iOS and Apple TV, for subscribing, managing, and listening to podcasts.

And the Music app will handle your own music library, Apple Music, and the iTunes Music Store. This latter app will resemble the current iTunes app, just without certain media types (videos and podcasts), with a refreshed interface, and, presumably, a new code base. But it won’t be that different from today’s iTunes, at least as far as music is concerned.

The iTunes Music Store will continue to sell music downloads. While Apple is trying to push people to use Apple Music, they’re not abandoning music sales; in fact, there is a sidebar entry called iTunes Store in the beta version of the Music app in Catalina. Here’s what they say on the macOS Catalina features page:

If anything, those who maintain a music library in iTunes are likely to find this new version to be an improvement. Apple says:

All your music organized in one place. See artists, albums, songs, playlists, and recent additions with a familiar menu in the new sidebar. And now, type what you’re looking for in the updated library pages to quickly find the exact song in your music collection.

Lots of tech journalists have been frothing at the mouth about this, trying to be the first to announced the death of iTunes, but it’s not happening. The iTunes name is being removed from the Mac app, and its media types are being segregated, but the underlying infrastructure remains essentially the same.

It’s also worth noting that on Windows—where the majority of iTunes users reside, by the way—there will be no immediate changes to the iTunes app. For the time being, Apple will continue to keep all of the existing iTunes functionality contained within the single app. So for most iTunes users worldwide, there will be no change whatsoever to the classic iTunes experience, at least for now.

Each week we discuss the latest Apple news, as well as security and privacy topics, on the Intego Mac Podcast. Be sure to subscribe to make sure you don’t miss any episodes! You’ll also want to subscribe to our e-mail newsletter and keep an eye here on The Mac Security Blog for updates.

Images of macOS Apple TV and Podcasts apps via 9to5Mac. Shatter pattern and hammer: public domain, via Pixabay. Apple icons and logos are the property of Apple, Inc.