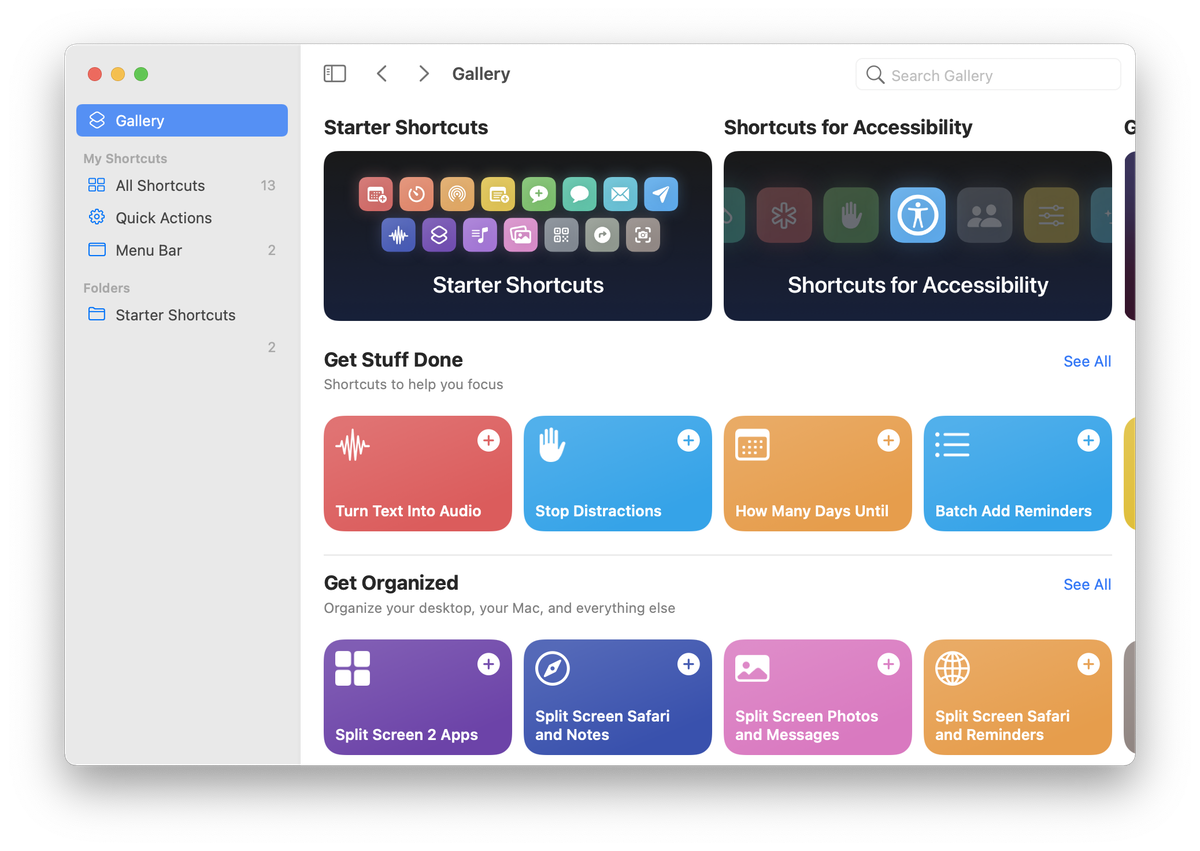 Apple has had a long history of automation tools on the Mac. From AppleScript, first added to the System 7 in 1993, through Automator, released with Mac OS X 10.4 in 2007, tools for automating repeated actions have saved Mac users a great deal of time. AppleScript requires that users learn a scripting language while Automator uses a drag-and-drop interface.

Apple brought automation to iOS in 2018 with Shortcuts, and now, with macOS Monterey, Shortcuts is coming to the Mac.

In this article I’ll explain how Shortcuts work, and show you how you can leverage this app to save time on your Mac.

Shortcuts is an app that lets you run automation scripts to carry out repeated actions with a single click. Shortcuts can work on the Finder, and with third-party apps, and any shortcut can work with multiple apps. This is one of the advantages of shortcuts: you can get data from one app, and pipe it into another.

There are lots of things you can do with shortcuts, but it’s hard to imagine all the possibilities. In the Starter Shortcuts section of the Shortcuts app Gallery, you can see some examples of what you can do with Shortcuts. 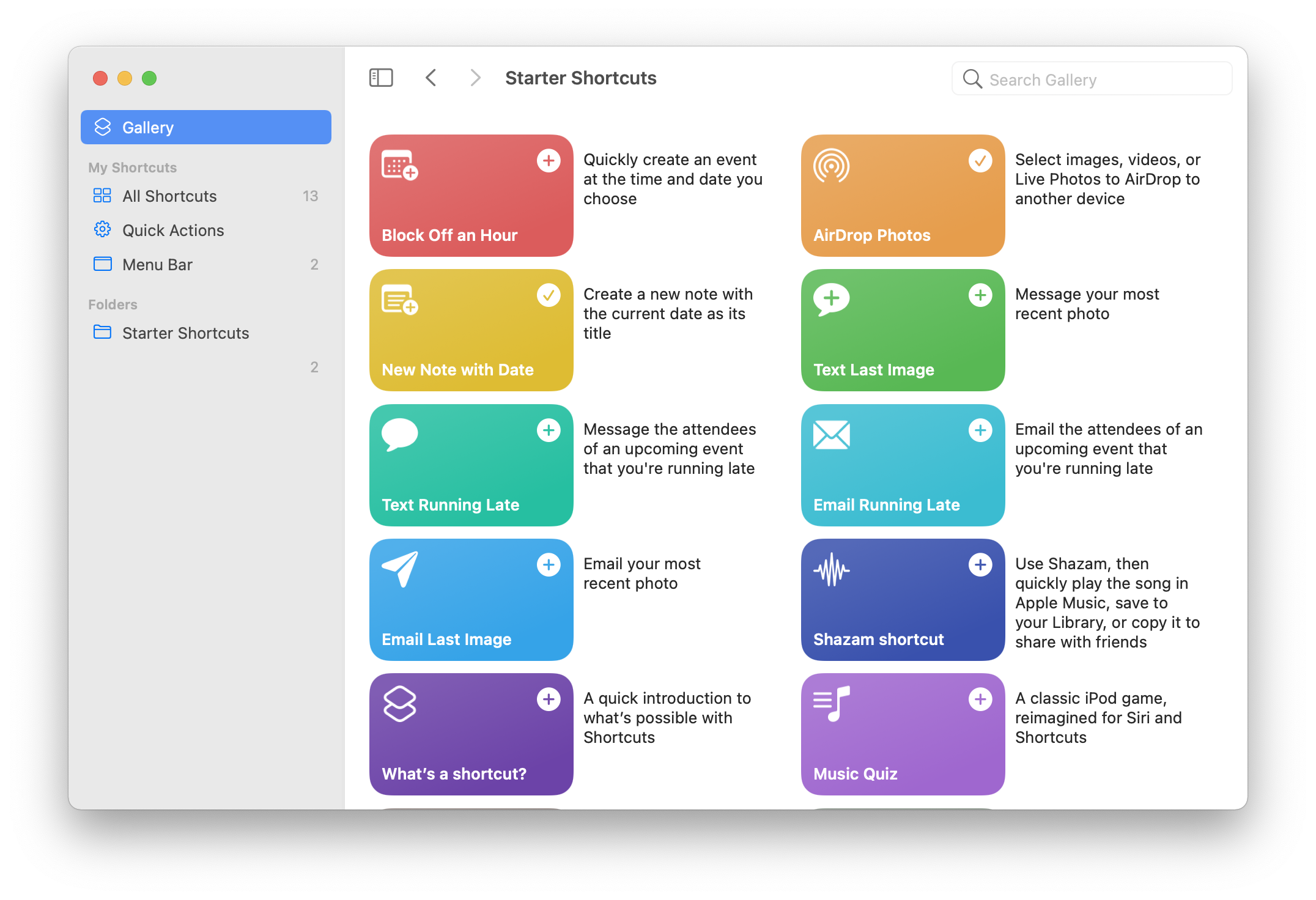 You can email or text your latest photo; you can get directions to an upcoming event in your calendar; you can email all the attendees of an event to say that you’re running late; or you can even create a QR code for a website that you can send to others.

When you create shortcuts, you can use them on your Mac, and, in many cases, also on your iPhone or iPad (and even, in some cases, on your Apple Watch). Shortcuts is designed to work on all Apple devices, though there are some shortcuts that will only run on specific devices, because they need certain hardware (such as a camera) or apps.

What’s in a shortcut?

Some shortcuts are very simple. They may have one or two actions, and may only use basic features of macOS. If you go to the Gallery in the Shortcuts app, then click Starter Shortcuts, you’ll see some examples to get you started.

New Note with Date is a good example of a simple shortcut. If you run this shortcut, your Mac will ask you to create a note in the Notes app, with the current date as its title, and ask you what you want to include in this note.

If you move your cursor over the shortcut’s tile, then click the Play button, this shortcut will run. The first time you run a shortcut, you may get a privacy dialog, asking if you really want to run the shortcut. This is to ensure that you have indeed activated the shortcut, and that it’s not a malicious shortcut trying to run (more on this below).

A dialog asks what you want the note to say, and when you’ve finished typing your note, click Done. 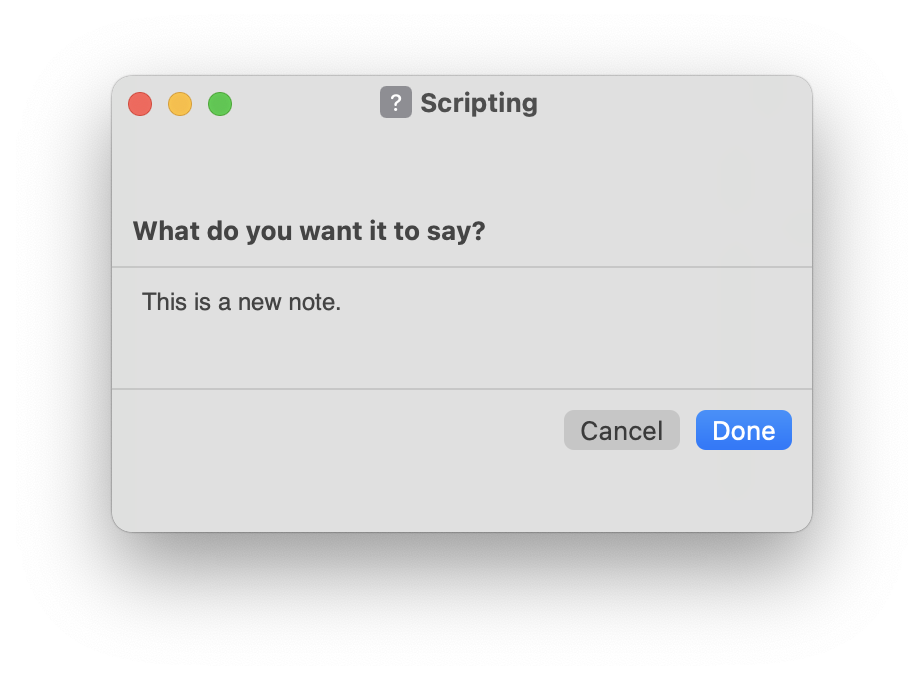 Notes then opens showing all your notes, including this new note. 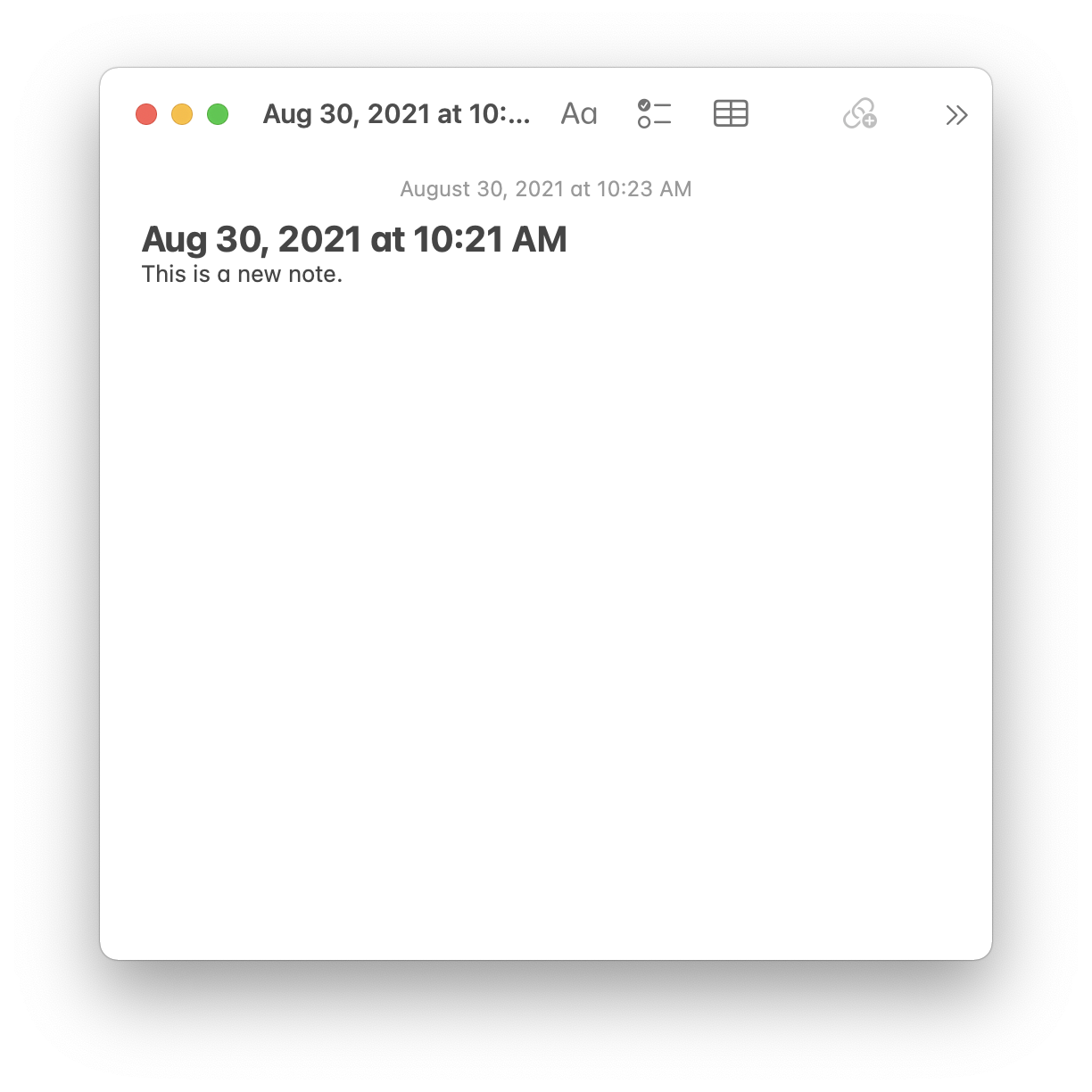 You can take a look at the code for this shortcut by double clicking its tile. 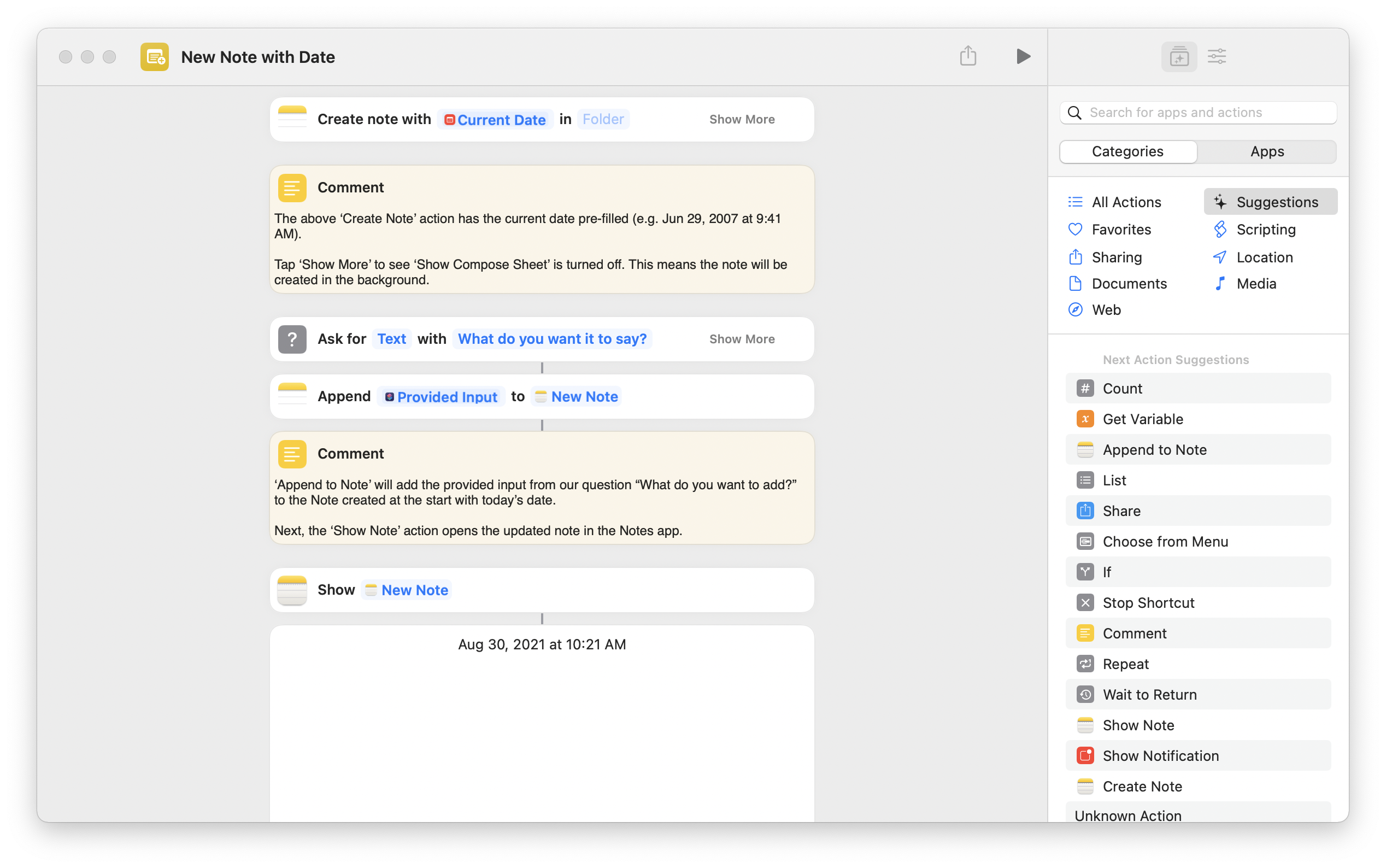 Shortcuts are made of actions; in the sidebar at the right of the Shortcuts window, you can see some available actions; if you click All Actions, you’ll see a long list of actions you can use in shortcuts. The actions available here include all those in macOS, as well as any third-party apps you have installed that offer shortcut actions. If you click Apps, you’ll see the apps on your Mac that offer shortcut actions.

In the New Note with Date shortcut, you can see that there are four actions, as well as two comments. The shortcuts that Apple provides contain useful comments to help you understand how they work, but also to give you information about ways you may be able to change the shortcut.

1 – The first action creates a new note in a Folder. If you click Folder, you can choose a folder in your Notes app where you want the note to be saved; if you leave this blank, the new note is created in the Notes app, but not in a specific folder.

2 – In the next step, you see Ask for; this action can ask for text, numbers, URLs, dates, or times. You can edit the text "What do you want it to say?" If you would rather that the dialog just say "What’s up?" you can change the text here.

3 – Next, the Append action takes the input from the previous action – the text you typed – then adds it to a new note.

4 – The final Show action opens Notes, and displays the note. You don’t have to include this action, but you may want to verify that your note has been saved.

The risk of running shortcuts on Mac

Unless you roll your own shortcuts, there is a risk that shortcuts you download may be malicious. We have seen this with Microsoft Word and Excel macros, where macro viruses have flourished ever since the company added a macro language to their apps. There have been issues with shortcuts that have been able to exploit vulnerabilities, so this is yet another vector that needs to be locked down. You may be tempted to download shortcuts you come across on websites, but you’ll need to be very careful, and be sure you can trust their authors, just as you need to trust developers when you download apps from their websites.

How to use shortcuts on the Mac

You won’t want to go to the Shortcuts app every time you run a shortcut on your Mac. macOS offers many ways to run shortcuts. To see these options, click the Shortcut Details button at the right of the toolbar, when you’re viewing a shortcut. There are three tabs in the right sidebar: Details, Privacy, and Setup.

The Details tab lets you choose how you can launch the shortcut. 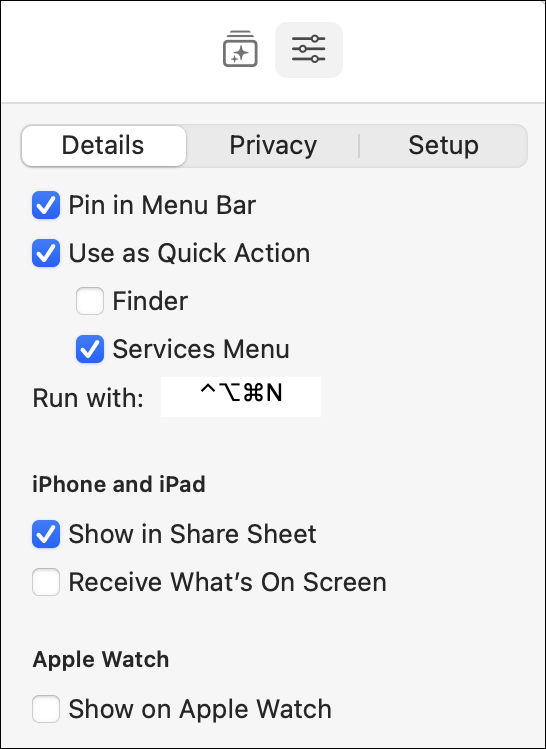 You can also use a shortcut as a Quick Action in the Finder, or in the Services menu. And you can even add a keyboard shortcut to run any shortcut with a simple keypress. For example, you might want to assign Command-Option-Control-N to the New Notes shortcut.

You can also add any compatible shortcut to the share sheet on the iPhone and iPad, use some shortcuts on the Apple Watch, and invoke any shortcut with Siri. Just say the name of the shortcut, and Siri will launch it.

As with all of Apple’s automation tools, there is great power in Shortcuts, and once you discover what you can do with this tool you may find that your computing becomes a bit simpler. Check out the Shortcuts Gallery and try out some of these shortcuts.