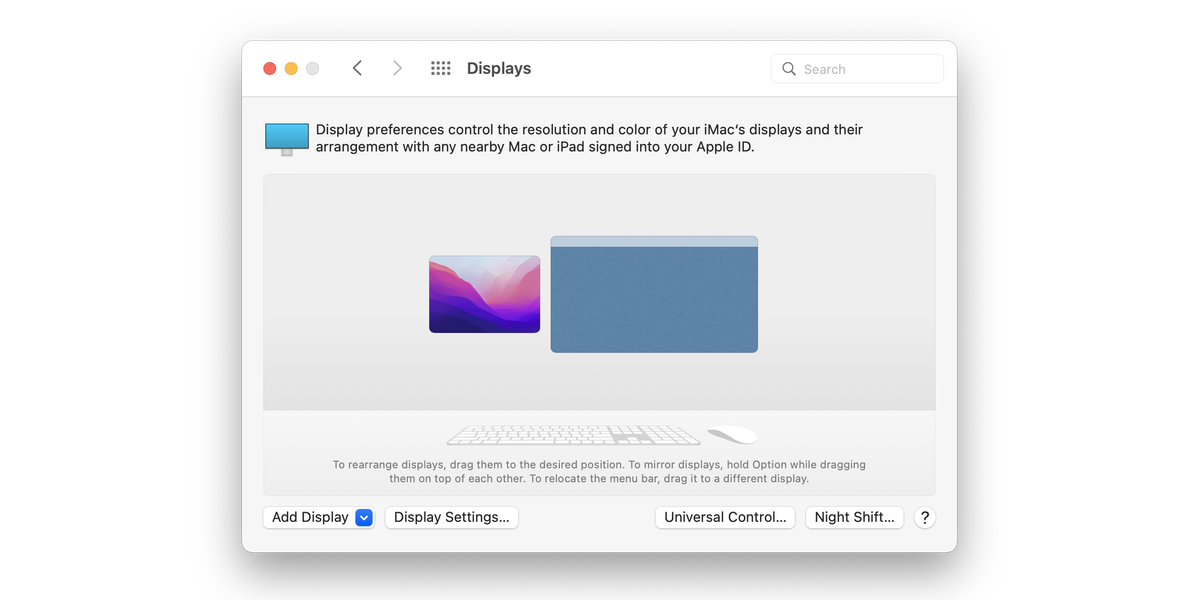 Universal Control is one of the most interesting features in macOS Monterey, but it’s taken months for it to roll out to users. Apple first presented the feature in June 2021, and, while it was slated to be included in macOS Monterey’s first release, it was delayed. It is finally available, but still officially described as "beta."

When working on your Mac, you can enable Universal Control so you can use the same keyboard and mouse or trackpad to control another Mac, or even an iPad. It allows you to have a second screen when you need it, to work with different apps. It’s not the same as Sidecar, which allows you to shift a window from your Mac to an iPad; it’s a way of using iPad apps and controlling them from your Mac.

In this article, I’ll explain how to set up and use Universal Control, and when you might want to use it.

What you need to use Universal Control

If you have recent Macs and iPads, you will be able to use Universal Control; these models support the feature. But there are a number of things you need to make sure of:

If you’ve had experience with KVM devices (devices that allow you to use the same keyboard and mouse with two computers), or VNC servers (virtual network computing), you know that these can often be finicky to set up. (Though Apple Remote Desktop is easy to use from one Mac to another.) To turn on Universal Control, you just click a button and choose a couple of options.

Start in the Displays pane of System Preferences. Click the Universal Control button at the bottom of the pane, and you see this: 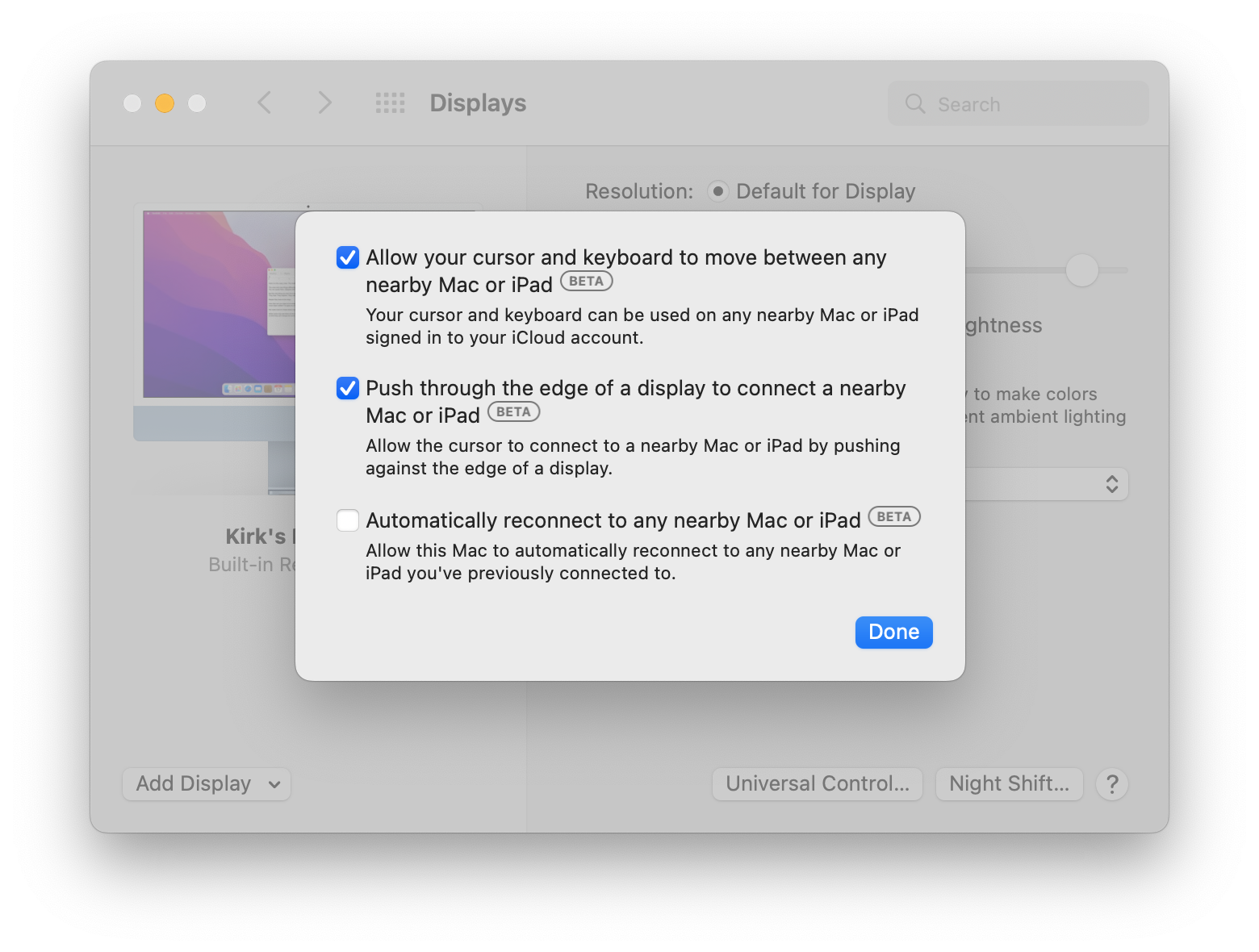 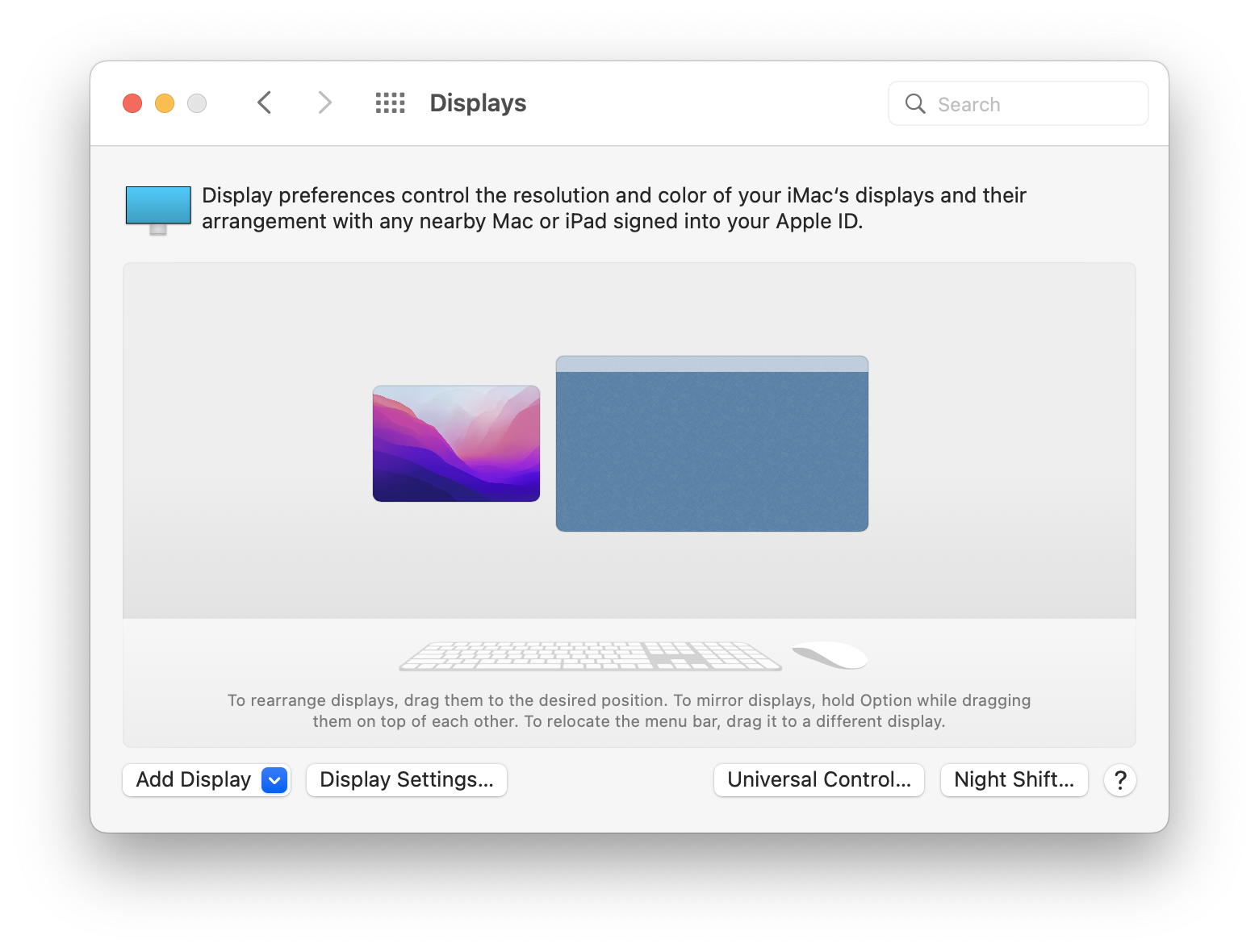 It’s not clear what the second option does. Sometimes, if this is enabled, and I move my cursor to the edge of my display, it stops at the edge, and I have to push a bit to get it to move to another device. And sometimes there’s an animation on the edge of the second device, but this doesn’t always display. Remember, this is still a beta.

The third option tells your Mac to automatically reconnect to any nearby device when both are active. You may want to do this if you plan to use Universal Control often with two devices.

If you want to turn off Universal Control, just disable the first option. You can also choose a device from the Add Display menu to remove it.

As you can see in the screenshot above, my iPad is to the left of my iMac; to move the controls to the iPad, I just move my cursor to the left edge of my iMac’s display, and it appears on the iPad. At that point, I can use both the cursor from my pointing device and the keyboard connected to my iMac to control that iPad and its apps.

If you’re using a second Mac with Universal Control, it’s exactly the same as using that keyboard and pointing device directly with that Mac. If you’re using an iPad, the cursor shows up as a large dot, and, once you see the cursor on the device, you can use the keyboard to control it. You can, of course, still use touch gestures if you want. (Pro tip: to switch between running apps on the iPad, press Command-Tab, and you can cycle through an application switcher, as on a Mac.)

You can copy and paste from one device to another, and you can also drag and drop items. This latter action makes sense on two Macs, where you can easily transfer files, but you can also drag files from a Mac to an iPad. You can drag files to add to emails or messages, or, if you want to use a file on your iPad, open the Files app and drag the file to a folder there.

Here’s a video of Apple’s Craig Federighi demonstrating Universal Control; this was first shown when the feature was announced, in June 2021.

You’re not limited to just two devices. If I add my MacBook Air, I can use three devices like this: Interestingly, the Mac knows where your devices are, and positions them in relation to the Mac accordingly. But you can also drag the external devices in the above screenshot if you want to position them differently. Dragging my MacBook Air below my iMac allows me to switch to that device by moving the cursor down below the bottom edge, rather than to the side.

And your Mac knows if an iPad is in portrait mode; here’s my iMac in the center, my iPad mini to the left, and my MacBook Air to the right. 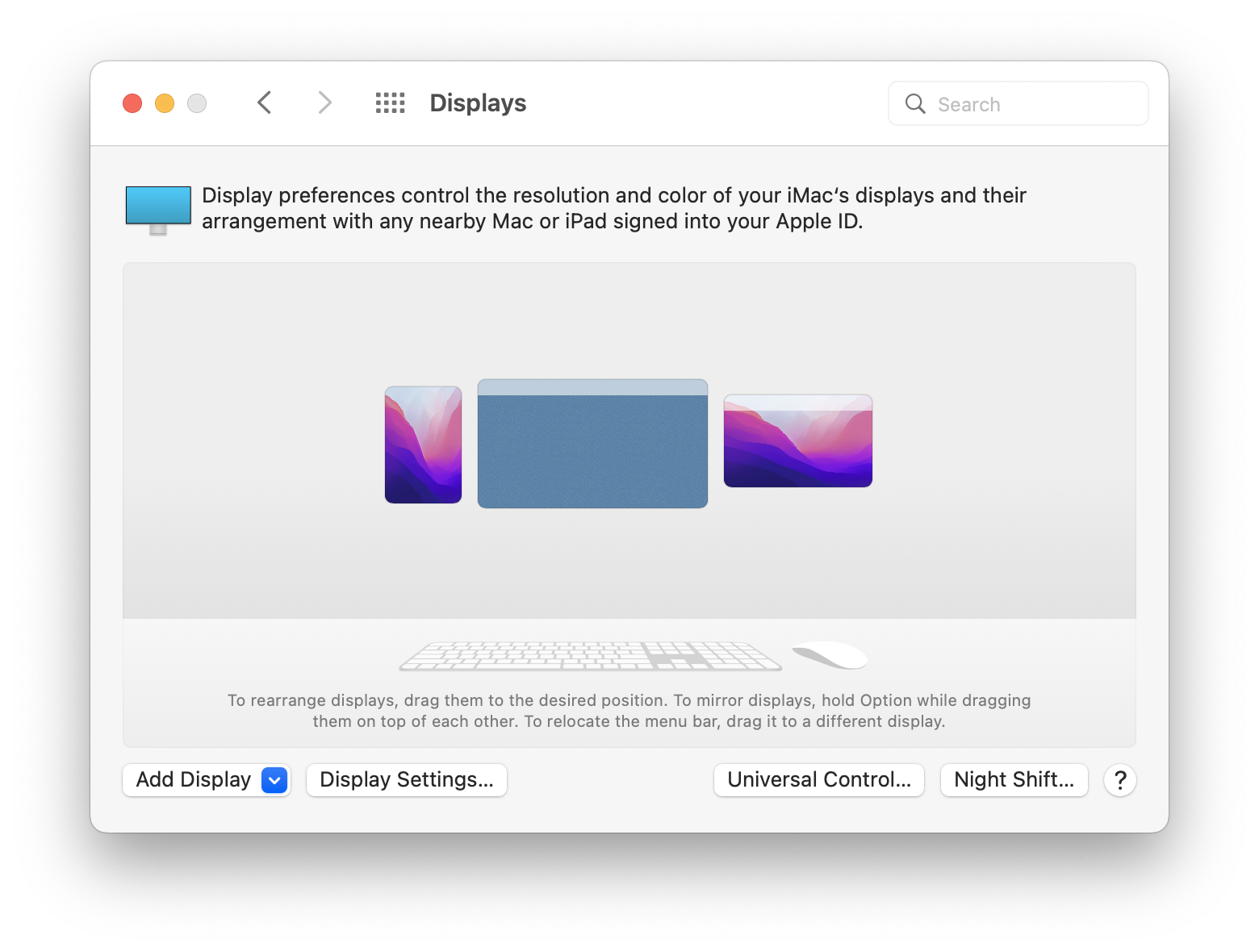 You can use three devices with a Mac using Universal Control: one to the right, one to the left, and one below.

When to use Universal Control

Some people will find Universal Control incredibly useful, and others will never need it. In my case, I often work on two Macs when I’m writing articles. I may have apps set up in a certain way on my laptop for screenshots or screen recordings, while I’m writing or editing on my iMac. Allowing me to not switch keyboards and trackpads will save me time, and the ability to drag files from one device to the other is a boon. It’s much easier than using other solutions, such as AirDrop, or a shared network folder.

Another way to use it is if you have specific apps you want visible all the time, but not on your Mac. For example, you may be monitoring a social media app, and you can do this on your iPad, switching to that device when you need to react.

Universal Control is a nifty new feature that allows you to extend your Mac and control other devices easily. It’s in beta, so there are still some glitches, but you may find that Universal Control makes your work much more productive.