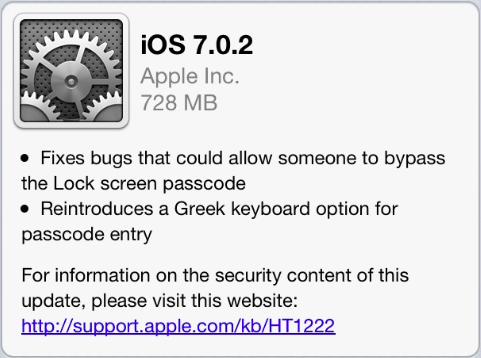 Apple has released iOS 7.0.2 with fixes for bugs that could allow someone to bypass the lockscreen passcode. The iOS 7.0.2 software update comes just one week after Apple launched iOS 7, which was quickly followed by the discovery of a new passcode bypass that allows access to email, Twitter, Facebook and Flickr. This update is available for iPhone 4 and later, iPod touch (5th generation) and later, and iPad 2 and later.

From Apple’s security bulletin, the bugs fixed in this update are described as follows:

Apple iOS users can download and install the iOS 7.0.2 software update through iTunes or through your device Settings (select General > Software Update).