Some apps you download on iOS, iPadOS, or macOS offer full access to their functions for an unlimited time. But more and more developers are offering or even requiring that you make “in-app purchases,” either to unlock an app’s features, or to buy extras, such as coins or gems to play games. Many apps also offer functionality on a subscription basis, where you pay monthly or annually to access an app’s features. In both of these cases, it’s easy for children to spend money on digital goods if you’re not careful. In this article, I’ll explain what in-app purchases are, how subscriptions work, and how you can manage these expenses.

What are in-app purchases?

There are four types of in-app purchases (IAPs) for apps sold through Apple’s App Stores:

The most common, and the most lucrative type of IAP, is consumables: the extra lives, coins, or points to unlock features or allow users to play games. Many games have a model where you can play a game, but need to purchase more items to make progress. If it’s a game where you have to spend coins to play, then, if you run out, you need to buy more, or wait for the game to give you more points. (Many games give points or coins daily to keep people coming back.)

If you look at the Top Grossing list in the App Store—the list of apps that have brought in the most money—you can see a number of “free” apps, mostly games, that are bringing in tons of cash through IAPs. Apple no longer provides a list of top-grossing apps, but some third-party services, such as App Annie, present lists of the top free, paid, and grossing apps. Here is their list as of June 21, 2021.

Of the six top-grossing apps, two are games (Roblox and Candy Crush Saga), and the other four are subscription apps. Games like this are called “free to play,” which is a tricky way to say that they are games which, while free for an initial download, strongly tempt players to spend money to play on. When downloading or purchasing an app that offers IAPs, the App Store tells you this, showing a small text next to the Get or Buy button.

Some games generate huge amounts of money from in-app purchases. The top grossing app, Roblox, grosses over $3 million per day, netting Apple 30% of that amount. If you look at the Information section of Roblox’s App Store page, you can see the variety of IAPs the game offers: 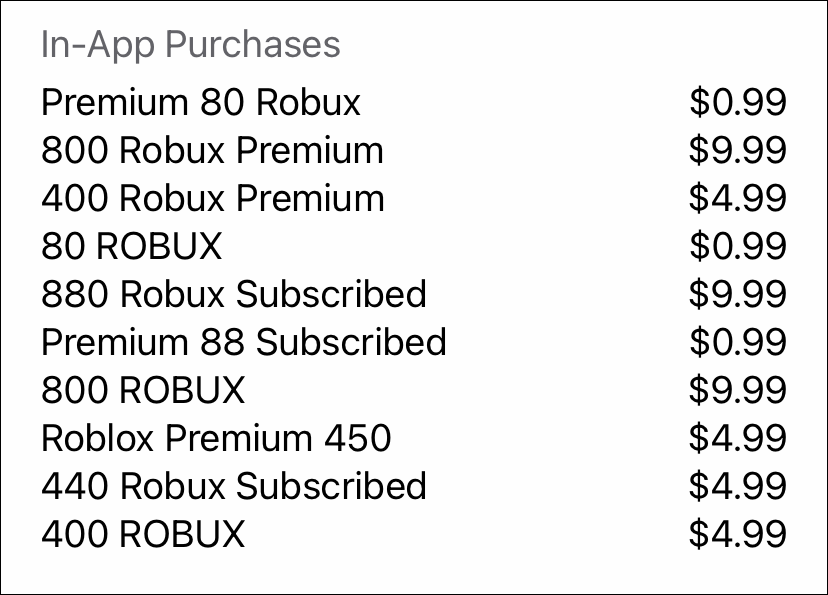 Some games sell even more expensive IAPs. The Uno card game app sells coins and diamonds; the latter can be used to buy coins and other items. You can spend up to $20 for a monthly delivery of coins, or up to $80 to buy diamonds.

In-app purchases work because they get players in the heat of the moment when they need just one more life, or just one more move to complete a level. In some cases, spending a dollar to get to the next level seems innocuous, until you realize that you could spend ten or twenty dollars in a single game session; all this to play a “free” app.

The problem with IAPs is that your kids can spend a lot of your money on them, if they use your iTunes Store account and are allowed to make purchases. A common scenario is a busy parent who is asked to enter their password for something a child wants to download. If you don’t take the time to ask what your son or daughter is downloading, and just enter your password, you may find that you’ve spent the price of a nice dinner.

You should check the Require Password setting in iOS’s and macOS’s Restrictions. This is the time limit that allows a user to re-download another item, or an in-app purchase, after an iTunes Store password has been entered, even for a free game. By default, this is 15 minutes, but you might want to lower it to prevent your child from downloading IAPs right after they’ve asked you to enter your password. You can also restrict in-app purchases entirely, if you wish.

We’ve told you how to set up parental controls and restrictions on macOS and iOS, and there is one setting in Screen Time to allow or prevent in-app purchases, in addition to the Require Password setting mentioned just above. This can ensure that your kids don’t spend hundreds of dollars buying coins for a game without realizing what they’re spending. In-app purchases are generally well explained—Apple requires this—but young children, who don’t realize the value of money, may just tap a button to get extras in a game, not realizing how much money they’ve spent.

In-app purchases aren’t entirely a bad thing, but these games are designed to generate large amounts of money through small, spur-of-the-moment payments. Be aware of what this means so you can keep your kids from spending too much.

Keep an eye on your subscriptions

There are many legitimate apps that sell on a subscription basis. More and more developers are doing this because it allows them to receive recurring revenue without having to release new apps on the App Store. Since Apple doesn’t allow developers to offer discounted upgrades for existing users, developers find it hard to get users to buy a completely different app, often similar to an older app with a new version number. They also cannot tell users about new versions, so subscriptions are the only way they can afford to keep improving apps.

In some cases, app subscriptions are necessary to use an app, and in others they provide access to additional features. There are many freemium apps that offer reduced features for free, and “pro” versions for a monthly or annual fee.

In addition, there are plenty of subscriptions to services, such as iCloud storage, Apple Music, Apple TV+, and others.

It’s not hard to check and manage your subscriptions on your Mac, iPhone, or iPad. This article, How to manage iTunes Store and App Store Subscriptions, explains how to do this.

It’s important to understand how app subscriptions work. They automatically auto-renew, and if you don’t cancel them within 24 hours of their expiration, they renew for the same term of the initial subscription. So if you’ve subscribed for a month, and forget to cancel in time, you’ll pay another month; if you’ve subscribed annually, however, you’ll pay another full year if you miss the deadline. You’ll still have access to the app or service until the end of the renewed term. If you’ve signed up for a free or discounted trial subscription, then you may lose access to that app or service as soon as you cancel it.

The new app economy is based on in-app purchases and subscriptions, and it’s important to understand how they work, how to ensure that your kids aren’t spending too much money, and how to cancel subscriptions when you no longer need them.