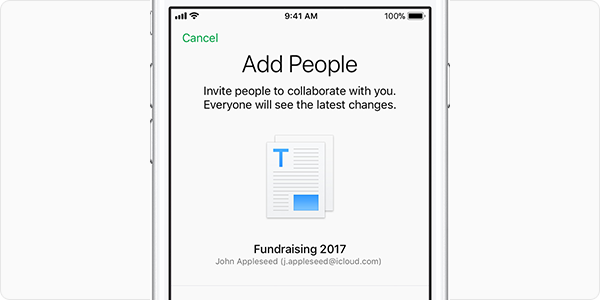 In a recent article, I looked at options to move away from Microsoft Office when using macOS High Sierra. Microsoft has said that Office 2011 will not be supported by the new Mac operating system, so unless you have a more recent version of Office, or a subscription to Office 365, you’ll be out of luck.

Many people (myself included) use the Office apps occasionally, but not enough to justify a subscription, or to justify buying the latest Mac version. There are other options, one of which is Apple’s iWork apps. These apps have some interesting features for collaborating with others, notably on the web. You can use them in place of Google Docs or other web-based productivity tools, but still work on your Mac and iOS devices as well.

In this article, I want to give you an overview of how you can collaborate using the iWork apps, even with people who don’t have these apps. You’ll see that they can be a good, free solution to replace Microsoft Office or other productivity tools.

Getting Started with iWork Apps

To begin, you’ll need to meet the following requirements:

Start by creating a document in any of the iWork apps. For this example, I’ve created a document in Pages, as seen in the image below. 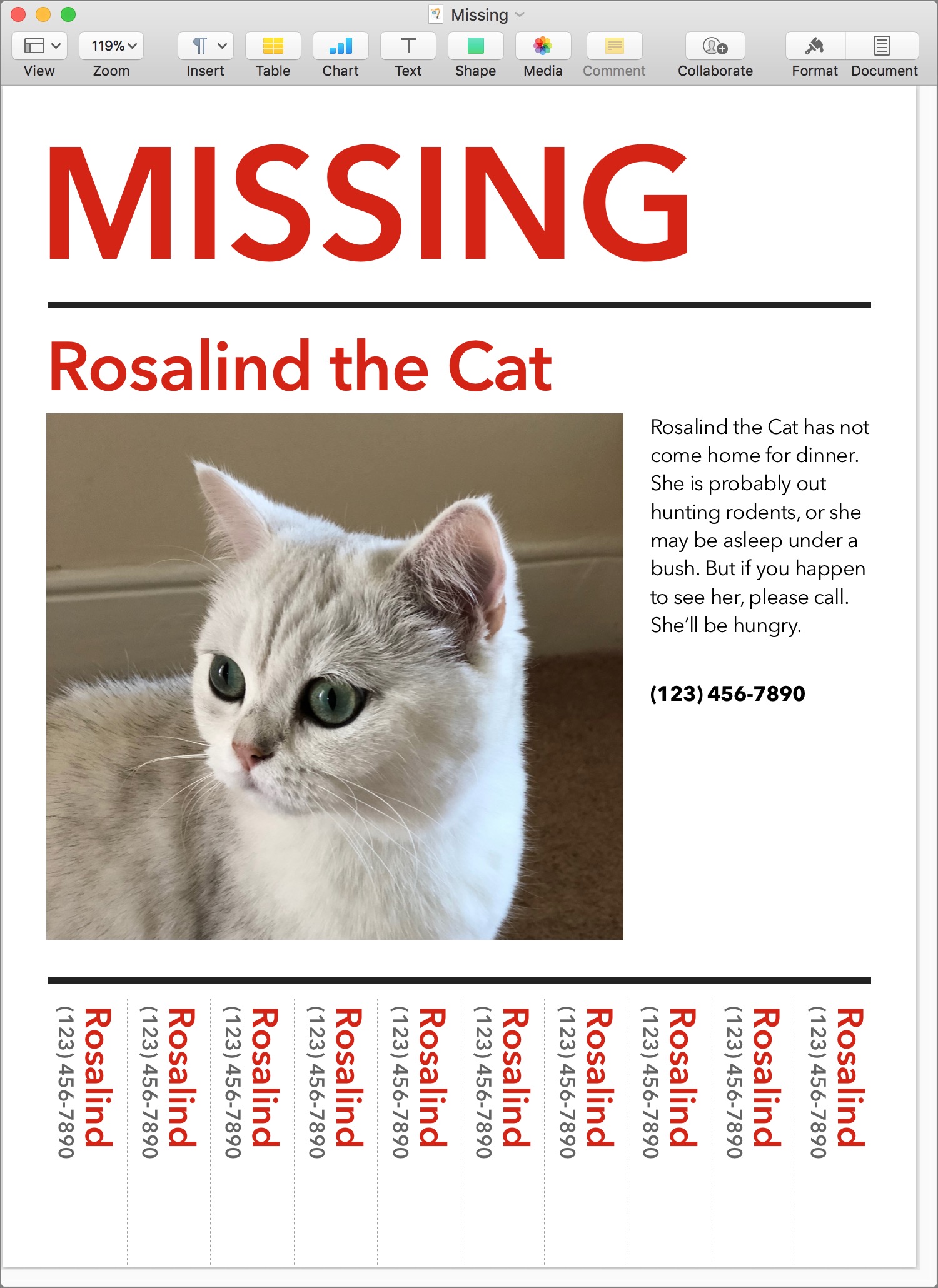 Don’t worry, Rosalind the Cat isn’t really missing, this is just an example.

Inviting Others to Work on Your Document

To invite others to view and work on your document, click the Collaborate button in the toolbar. If the document isn’t yet in iCloud, you’ll have to move it there; a dialog lets you do this.

Another dialog displays, asking you to add people to view or edit the document. 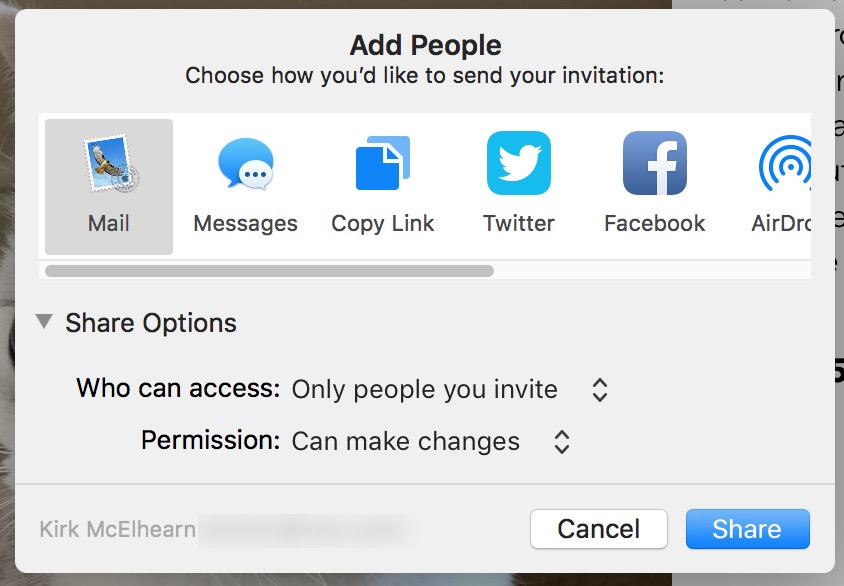 The first, “Who can access,” lets you choose whether only people you invite can access your document or whether anyone with the link can do so. You might choose the latter if you need to make the document available to a group and just want to send a link rather than invite each person individually.

The second option, “Permission,” lets you choose to allow others to make changes or whether they can only view the document. In some circumstances, you may want to allow one or two people to make changes, and let a group of people to view your document. In this case, you’ll need to send two separate invitations, or create a second invitation and copy the document’s link to send it to those who don’t have edit permissions.

After you’ve sent the invitation, your document will show a Starting Collaboration sheet. When your invitees have joined, they’ll open the document in the iWork app on their Mac or iOS device, or access it on the web. If you click the Collaborate button in the toolbar, you’ll see a list of all the people working on the document. You can add others by clicking Add People. 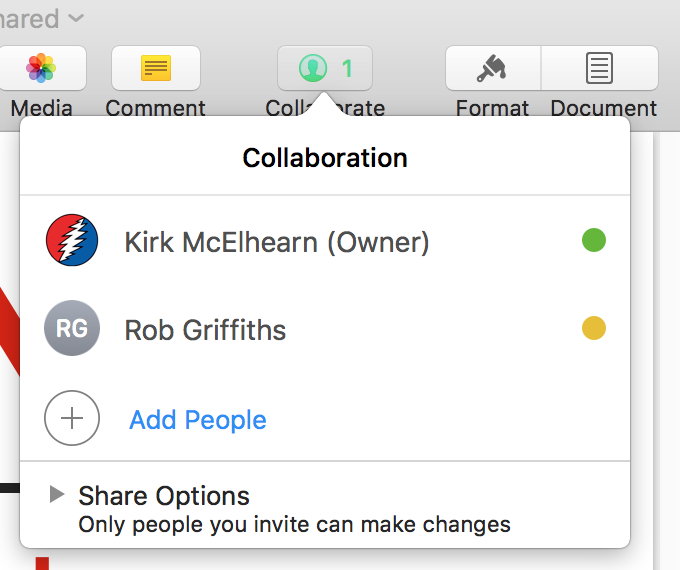 Now that you’re sharing your document, your collaborators can make changes (if you’ve allowed them to). The popover image above shows you colored dots to the right of each person’s name; you’ll see those colors in the document as your collaborators select text, edit it, or type. Tap the dot to jump to where another person is working. As with similar tools, you won’t see actual tracked changes. Instead, you’ll see only the final document. 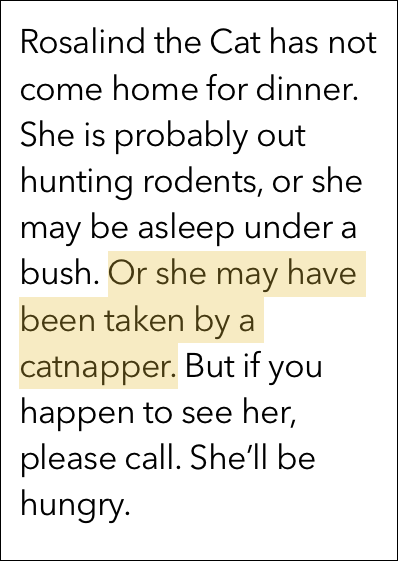 In many cases, you may not want collaborators to make changes to documents, but simply add comments. They can do this by clicking the comment button in the toolbar — it looks like a notepad with lines — and add comments. This is a good way of working if you want to control the changes in your document.

If you’re on a Mac or iOS, you can use change tracking to see the changes. This feature doesn’t work on iCloud.com, and, if you activate it, web users will only be able to view the document, but not edit it. To turn this on, choose Edit > Track Changes. Each change made to the document will be visible, and the owner of the document can decide to accept or reject them.

If you want to work on a document when you’re not online, you can do this on Mac or iOS. Your iWork app displays a dialog asking if you want to save an offline copy of your document. When you have online access again, your changes will be synced to the document.

When you’re finished collaborating on your document, click the Collaborate button in the toolbar of your app (on Mac), or the round icon with the head and shoulders silhouette (on iOS), tap or click Share Options (on Mac), then Stop Sharing, then OK.

Some Limitations to Using iWork Apps

There are some limitations to using iWork apps to collaborate. You won’t see changes in real-time, as you do with Google Docs, but you can use change tracking, as explained above, which Google Docs does not offer. And there are a number of features that are not supported in collaboration. You’ll find a list of them at the end of this Apple support document. Nonetheless, most people will use these features for editing text and making minor changes, so you’re likely to not encounter any problems.

In spite of these limitations, iWork collaboration is a great way to get feedback on your work, or to work closely with someone else in another office, another city, or even another country. It’s a good way to have someone comment on a draft document, or allow an editor to proofread or copy edit your work. If you work with other people on documents, give Apple’s iWork apps a try — it may save you a lot of time.