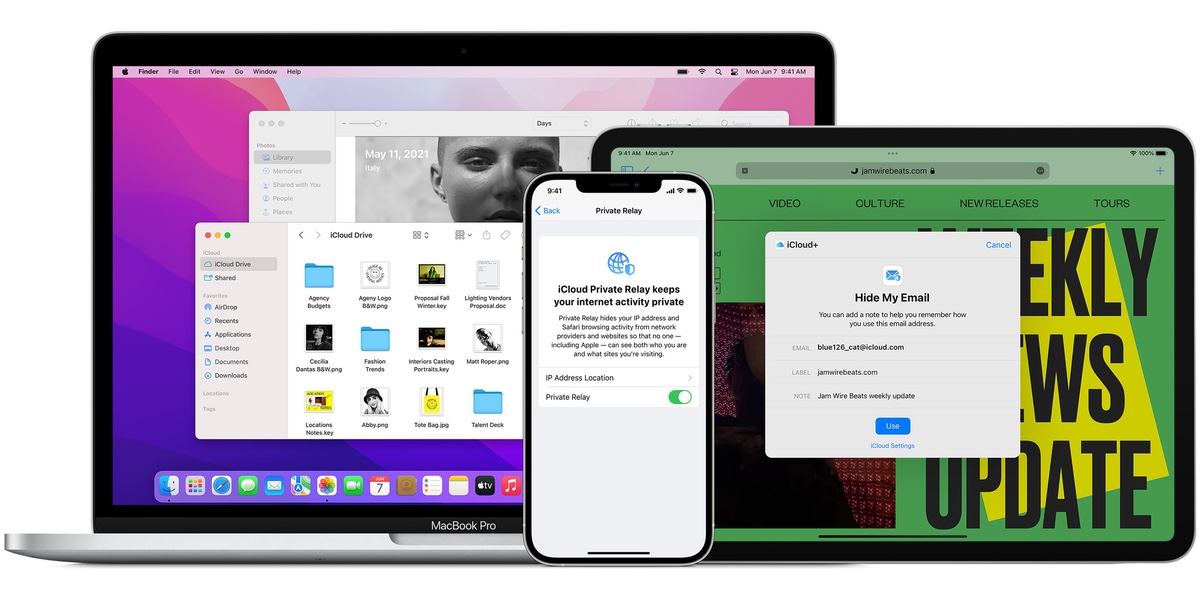 Apple gave its first public presentation on Monday about its flagship operating systems coming in 2021: iOS 15, iPadOS 15, and watchOS 8. In addition to some new features to increase productivity (see Apple Announces New Features in iOS 15, iPadOS 15, and macOS Monterey), there are many new privacy features that give users more control over their data. And Apple has announced iCloud+, a privacy-focused service available to all users who pay for additional iCloud storage.

Overview—including what wasn’t in the keynote

First, let’s summarize all the privacy-related announcements, including some things we’ll discuss in more detail below. For things that either weren’t announced in the Apple Event, or that many people missed or aren’t talking about, we’ve put them in bold in this list.

A number of features in macOS Monterey are only available in Macs running Apple’s own processors. This is likely because these features are not optimized for Intel processors, or they require certain processor enhancements. (Though it’s not clear why text to speech in certain languages is processor dependent.)

Apple has announced several useful features to protect privacy in emails. Hide My Email, available as part of the forthcoming iCloud+ service, works like Sign In with Apple, allowing users with iCloud email accounts to route certain emails through Apple’s proxy servers. When you use Sign In with Apple, you can choose to have your email visible to the site or service where you sign in, or it can be obfuscated, with a unique, random email address. Those emails are forwarded to you, and you can easily turn off that email address. Hide My Email works the same way. If you sign up for, say, a newsletter on a website, and use Hide My Email, your personal email address stays private, and you can easily delete the email addresses used by the website if you can’t unsubscribe from the newsletter. Read more about Hide My Email and how it works.

Invisible pixels have long been a way for advertisers and mass emailers to track users. One tiny pixel that you can’t see, that loads from a server, sending information about you to the server, indicates whether you’ve opened an email, and provides information such as your IP address. Apple’s Mail Privacy Protection blocks invisible pixels and prevents senders from collecting data. The feature is off by default, so you have to manually choose to enable it.

In addition to the visual changes to Safari—notably the new tab bar—the app’s Intelligent Tracking Prevention feature now prevents trackers from getting your IP address. This address can be used to build a detailed profile of your activity and your personal preferences, so preventing advertisers from accessing this information will enhance your privacy.

Safari will also automatically convert less secure HTTP web addresses to the more secure HTTPS, when sites support it. This is especially useful when following old links on websites, created before HTTPS was common, that may send you to HTTP versions of sites.

You already have control over which apps can access your location, photos, camera, microphone, and contacts. The new iOS App Privacy Report will provide data that you can audit at any time to see how often apps have accessed this personal information.

One of the big features that Apple announced is iCloud+. This expansion of additional services and functionality is all “free,” assuming you already pay for additional iCloud storage, which starts at U.S. $0.99 per month for 50 GB. While Apple hasn’t upped the default (actually free) 5 GB of iCloud storage, that buck a month now looks like a really good deal for everything you will get.

As mentioned above, Hide My Email lets you use email addresses that forward to yours, so you can cut down on spam and other unwanted email.

iCloud Private Relay is a proxy service that encrypts all the traffic when you browse with Safari, and passes it through two proxies. The first assigns an anonymous IP address that indicates the region where you are, but not your precise location. The second proxy decrypts the address of the website you want to visit and forwards your request to that site. This separates user information from web traffic, and greatly enhances privacy.

Notably, iCloud Private Relay is not a VPN (Apple doesn’t claim that it is, but some news outlets have erroneously reported this). First, it only works with Safari, and doesn’t protect all of your device’s traffic, while a true VPN ensures that all your Internet traffic—from every app—is encrypted. Second, iCloud Private Relay doesn’t allow you to choose a server in a specific country, which can be useful to access geo-restricted content. Read more about iCloud Private Relay, and read why it is not a replacement for a VPN.

An upcoming article here on The Mac Security Blog will further address the distinctions between iCloud+ Private Relay, Safari and Mail’s IP address masking, and and how these new Apple features compare with the vast capabilities of full-fledged VPN service.

iCloud+ will also allow users to map custom domains to their iCloud email accounts, and share them with their family (if they have family sharing set up). This could finally be a way to get robust email without having to use a provide such as Google. It’s not clear, but presumably you’ll be able to benefit from Hide My Email with a custom domain.

iCloud+ also includes expanded HomeKit support, including the ability to use your iCloud storage to securely store recordings from a HomeKit-enabled security camera. (If you have more than one HomeKit Secure Video camera, you’ll have to pay for a higher tier than the base $0.99/mo. plan; for two to five cameras Apple requires you to be on the 200 GB plan for $2.99/mo., and for six or more cameras you must be on the 2 TB plan for $9.99/mo.)

Currently, 85% of iPhone users and 79% of iPad users are running iOS 14 or iPadOS 14, and this rises to 90% and 91% of those users with devices released in the past four years. Since all devices running iOS/iPadOS 14 will be able to upgrade to iOS 15, this means that all these users should potentially upgrade.

Those who don’t upgrade right away, however, will still get security updates. This is especially a good thing for enterprises who may have large numbers of devices and can’t update because of the use of in-house apps or other device management requirements or logistical challenges.

This is a bit of a shift in position for Apple. The company has maintained the same system requirements from iOS/iPadOS 13 through iOS/iPadOS 14 and now the upcoming iOS/iPadOS 15, so it’s interesting that Apple will continue releasing updates for 14 in spite of 15 having the same hardware requirements. Last year, Apple required all iOS 13 users to upgrade to iOS 14 in order to receive security updates.

Apple didn’t discuss improvements to password management in their WWDC event, but there are some major changes coming. In macOS, passwords will now be managed in System Preferences, just as they are in Settings on iOS and iPadOS. The iCloud Keychain is being rebranded as iCloud Passwords, and will now be available for Windows, with an extension to use them in Microsoft Edge. Previously, iCloud Keychain was only available for Apple devices.

The expansion into non-Apple devices for iCloud Passwords and the inclusion of built-in authenticator app functionality both demonstrate that Apple is getting serious about being in the password manager space.

Apple is introducing Account Recovery Contacts, to allow you to nominate people who can approve you if you forget your Apple ID password. And Apple is also introducing a Digital Legacy program, through which you can select Digital Legacy Contacts who can access the information in your account if you pass away.

On iOS and iPadOS, Secure Paste allows you to paste content from one app to another, without the second app being able to access the information on the pasteboard until you paste it. This means that if you copy something from app A, then open app B, that app won’t be able to parse what’s on the pasteboard. You can then switch to app C to paste that data. This is a major improvement over iOS 14, which simply notifies you when an app takes data from the clipboard (which could mean that a password or other sensitive data on your clipboard could be sent to an app developer without your consent) but doesn’t actually stop it from happening.

There are lots of useful privacy features in this year’s operating systems, further cementing Apple’s position as a leader in this area. These upgrades will be welcomed by all those concerned about their personal data and privacy.

In an upcoming article, we’ll address the important distinctions between Safari and Mail’s IP address masking and iCloud+ Private Relay, and how they compare with the vast capabilities of VPN software. Stay tuned to The Mac Security Blog for more about this.

We discussed these new privacy features in episode 191 of the Intego Mac Podcast.