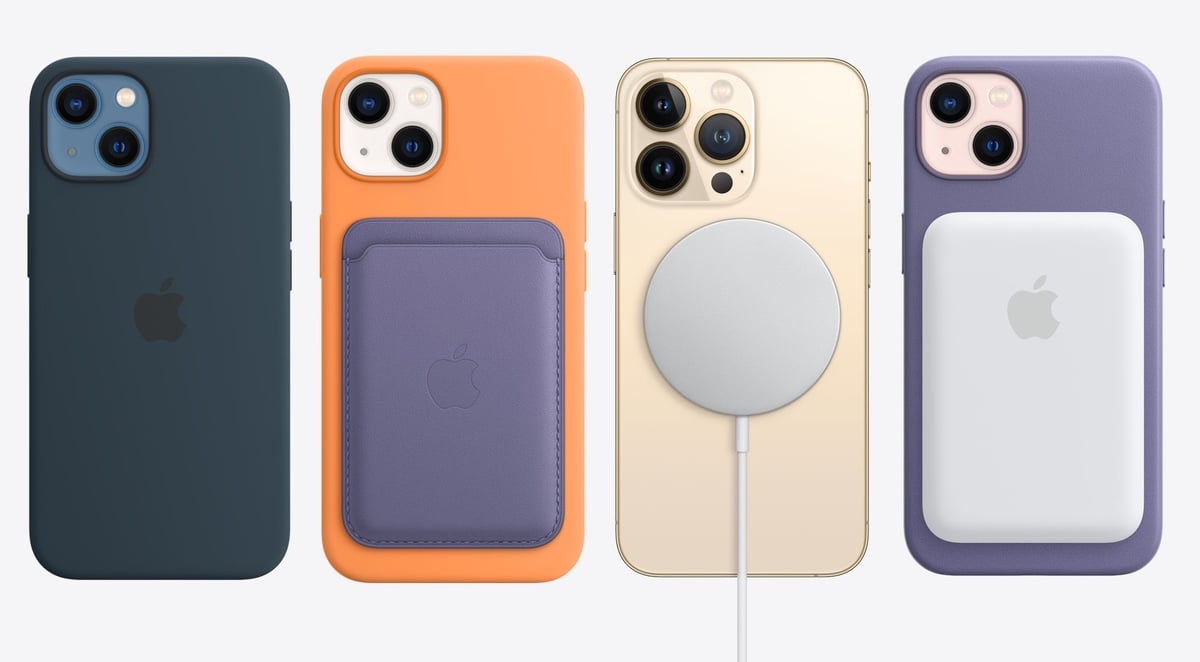 Apple’s iPhones feature the MagSafe charging infrastructure, allowing them to charge without plugging a cable into the devices. While this is not technically “wireless” charging – the MagSafe charger still has a wire – this form of induction charging is practical and it means that you can charge multiple devices without cables.

MagSafe is also a new accessory category for Apple, with a number of different cases available, several chargers, a battery pack, and the MagSafe wallet, which lets you attach a slim leather wallet to your iPhone to carry credit cards or cash.

In this article, I’m going to tell you everything about MagSafe: how it works, what you can charge with it, and which MagSafe accessories are available.

Long-time Apple users will remember the power connectors that Apple used on certain laptops from 2006 through 2019. These connectors snapped onto a special power port on the laptops, and were designed so if you tripped over a power cable, it wouldn’t throw your expensive Mac to the floor, but rather detach safely.

Apple re-introduced this term in 2020 for chargers that work with the iPhone and with certain headphones. While the “Mag” part is still true, there’s not much that is “Safe” about it. But the name sounds impressive, and Apple already owned the trademark. Apple also brought this back in Summer 2022, with the release of the M2 MacBook Air, which is currently the only laptop to offer MagSafe charging.

MagSafe charging is a form of induction charging, which is compatible with Qi charging, a standard used by many tech firms to provide cable-free charging. Both of these use a pad with a transmitting coil, and a receiving coil in devices, to transfer electricity. The magnets in Apple’s MagSafe chargers, and iPhones, allow the charging to be more efficient, since they can align the two coils perfectly.

How is MagSafe different from Qi charging? 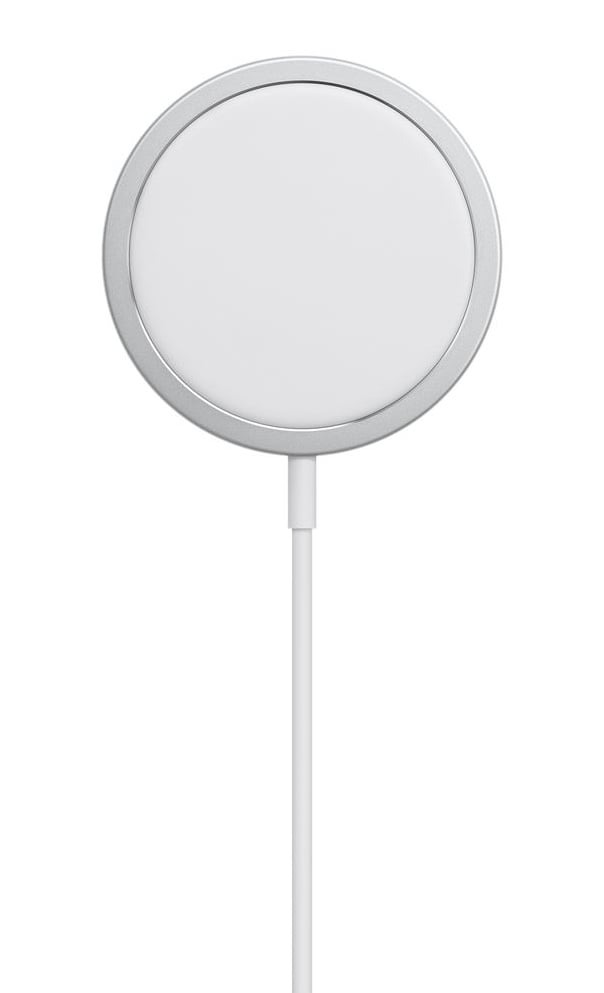 Both systems work in a similar way, but with MagSafe, you can charge your iPhone 12 or 13 at up to 15 W (the iPhone 12 mini and 13 mini can only change at up to 12 W), whereas Qi charging is limited to 7.5 W. Some phone brands allow for Qi charging at 10 W, but Apple limits its devices to 7.5 W, perhaps for safety or efficiency reasons. If you charge headphones, such as Apple’s AirPods or AirPods Pro, the maximum voltage is 7.5 W.

Apple recommends that you use a 20 W or greater power adapter with MagSafe chargers in order to get the full 15 W charging rate.

A new standard, called Qi2, will be built around Apple’s MagSafe technology, specifically ensuring that chargers snap into place with magnets. One problem with standard Qi charging is that, when the coils are not aligned between charger and device, a lot of energy is wasted, and charging is slower. The Wireless Power Consortium (WPC) will develop a standard for induction charging that requires this alignment for more efficient charging. These new chargers and devices will be available in late 2023.

What do you need for MagSafe Charging?

MagSafe charging requires a compatible iPhone – currently, the iPhone 12, 13, and 14 models – and a MagSafe charger. (The iPhone SE (3rd generation) is not MagSafe compatible.) If you want to charge your iPhone with a case, you have to have a compatible MagSafe case, which also contains magnets, laid out in a MagSafe Case Magnet Array. You can charge an iPhone 12, 13, or 14 on a Qi charger, but the voltage will be lower. And you can charge the following models of AirPods:

Apple sells MagSafe chargers, as do some third parties, under Apple’s “Made for MagSafe” program. Apple has partnered for now with Belkin for these products, and other companies sell “MagSafe compatible” chargers, which use the Qi charging standard, which charges more slowly.

The MagSafe charger does work with older iPhones – starting with the iPhone 8 – but only at the slower, 7.5 W speed.

As mentioned above, MagSafe cases have to contain a MagSafe Case Magnet Array, which you can see in this photo of Apple’s clear case for the iPhone 13. The round array magnet passes the charge through the case to the device, and the straight orientation magnet is there to ensure that some devices are lined up correctly. 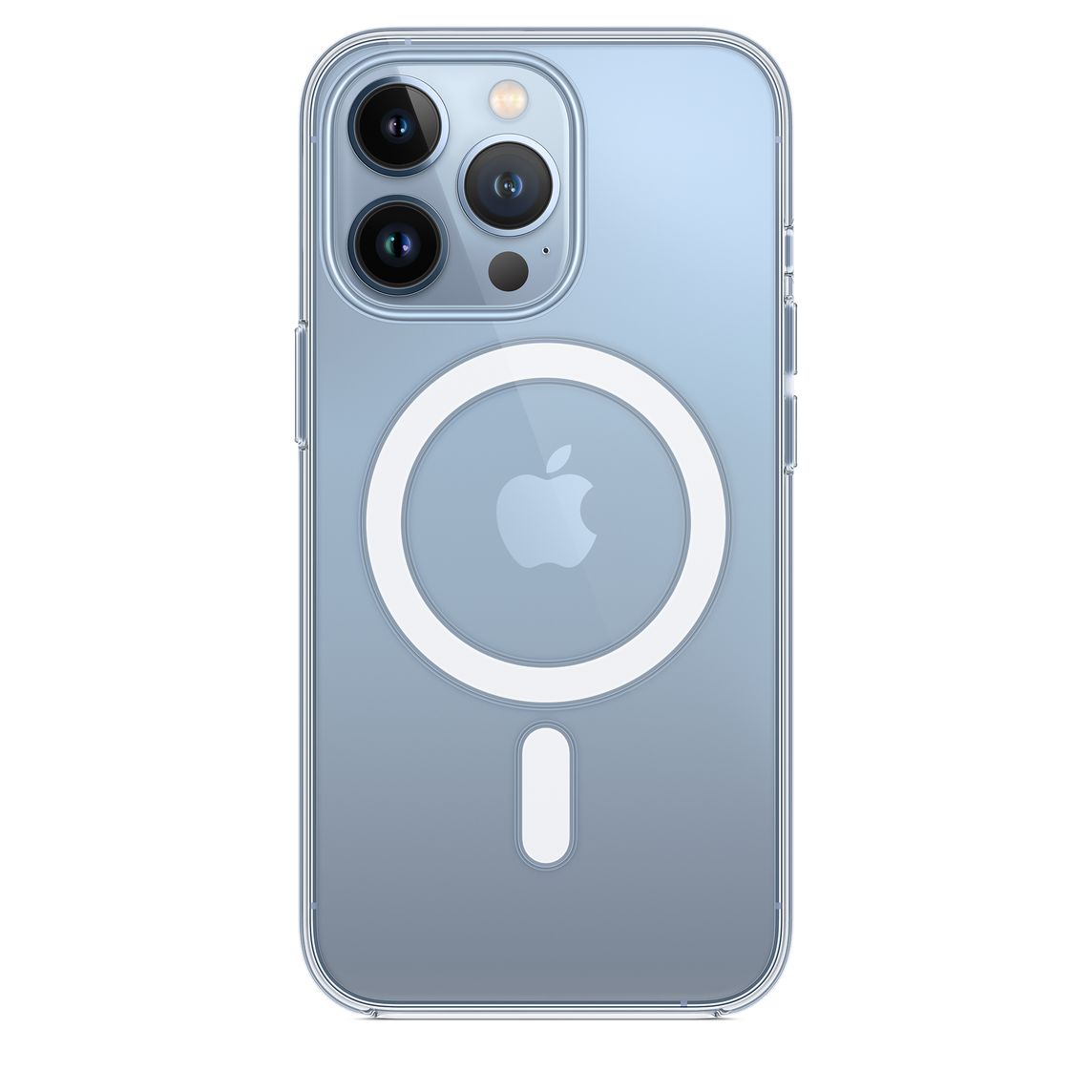 Apple sells MagSafe cases in clear plastic, silicone, and leather, and also sells a leather sleeve with a wrist strap for the iPhone 12 models. Apple also sells cases from OtterBox, and a number of third party companies sell MagSafe compatible cases. If you have a very thin case that is not designed for MagSafe, you might be able to use it with a MagSafe charger, but the charging may not be as efficient. 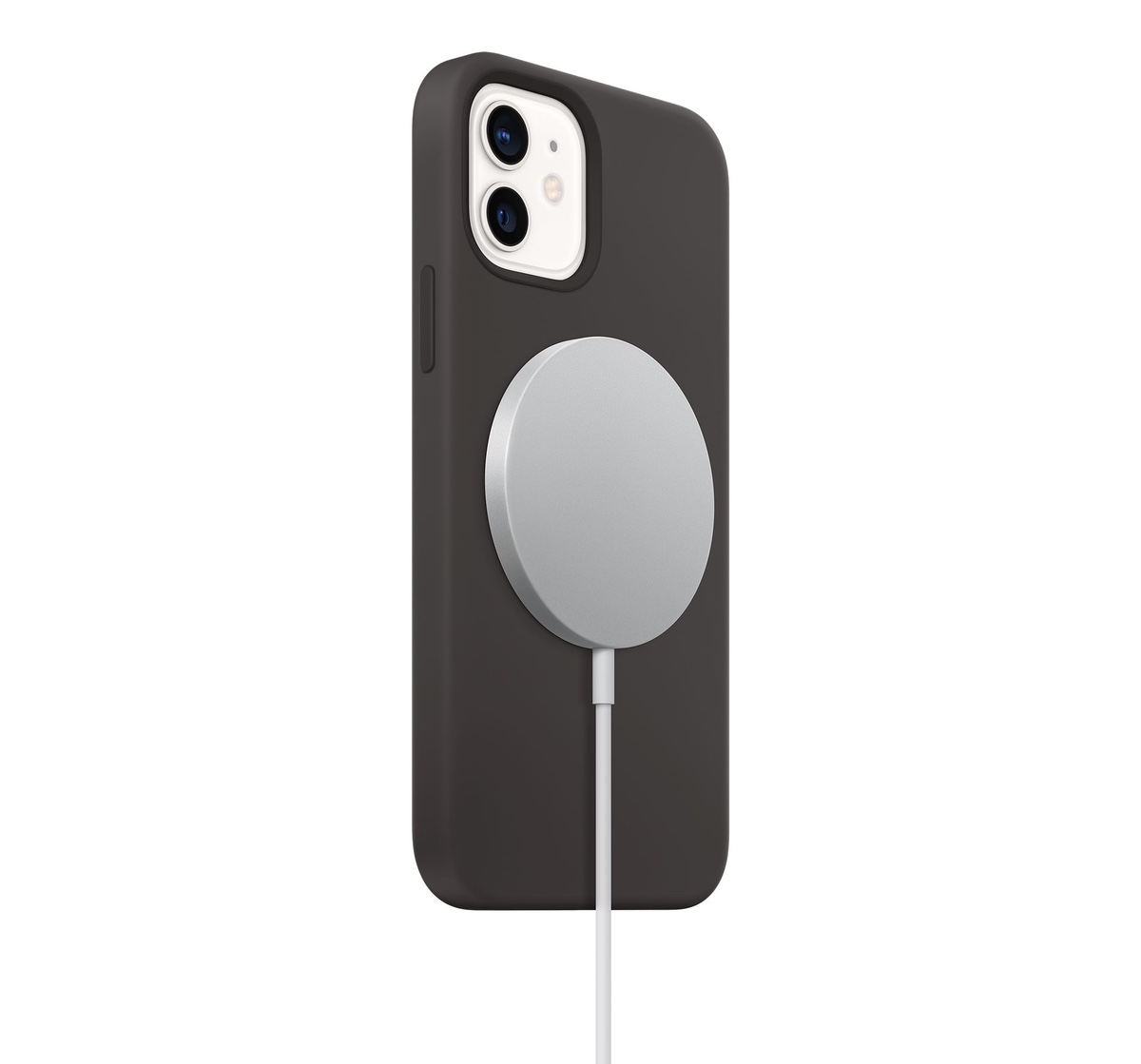 The MagSafe Duo charger is great if you have an iPhone and an Apple Watch, and it’s foldable and portable, so it’s the perfect charger to take on the road. It uses a USB-C to lightning cable, so you’ll need the right charging brick, as with the simple charging disc. Apple says that you need a 27 W or higher power adapter to charge at up to 14 W with this charger, and that a 20 W power adapter only charges up to 11 W. Presumably, this lower charging wattage is due to the fact that there are two chargers in the device. 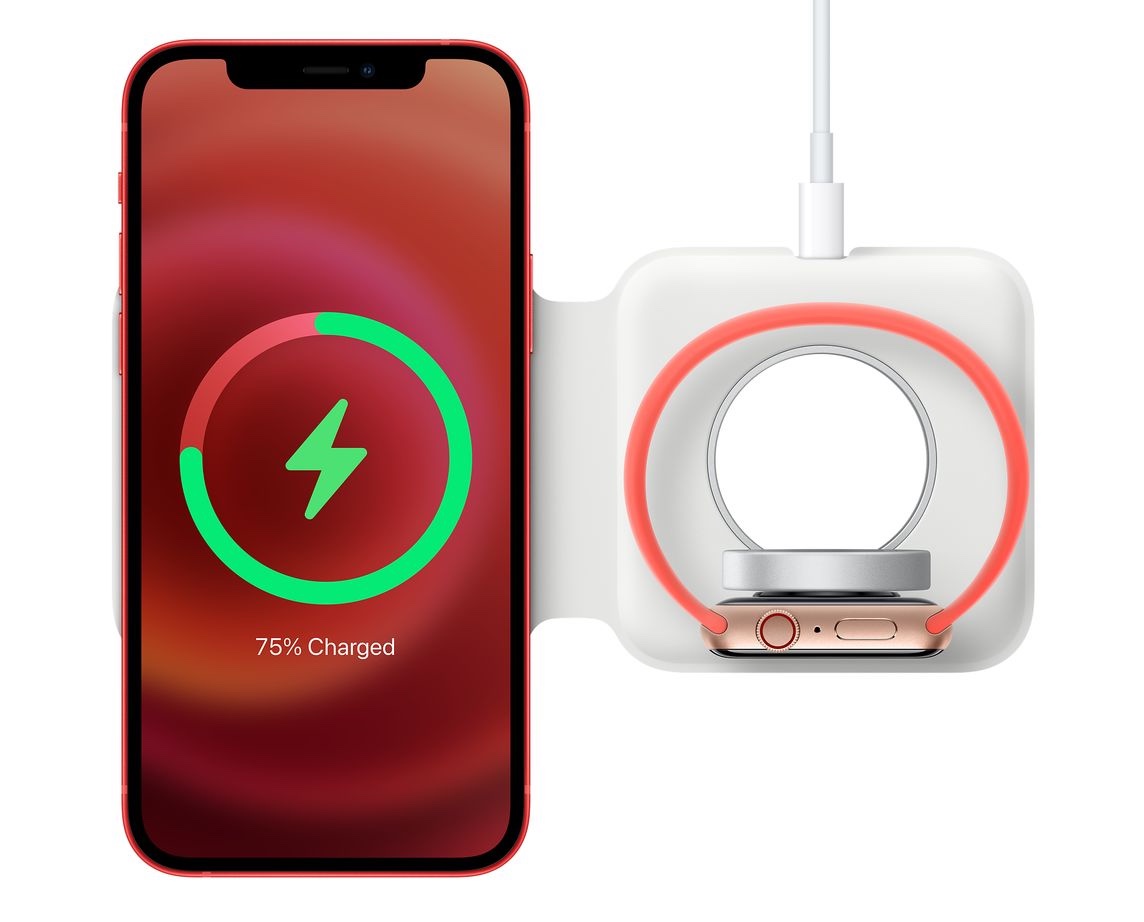 You can buy a mophie 3-in-1 travel charger with MagSafe, which charges at up to 15W. Belkin also sells the BOOST↑CHARGE line, which offers some MagSafe chargers that work at up to 15 W, others up to 10 W, and other companies have chargers that are magnetic, but that only provide 7.5 W charging. There are also lots of stands into which you can insert the Apple MagSafe charging puck.

When Apple introduced MagSafe in 2020, they announced a battery pack, and it took until the summer of 2021 for this to be released. The MagSafe Battery Pack snaps onto any iPhone 12, 13, or 14, and provides from 40% to 70% additional charge for the device. (The percentage depends on the iPhone’s battery; since the iPhone Pro Max models have the largest batteries, the charging percentage is lower). It’s not a lot of power, but it may be what you need to get through the day. Here’s the MagSafe battery pack on an iPhone 13 Pro, and a MagSafe wallet: 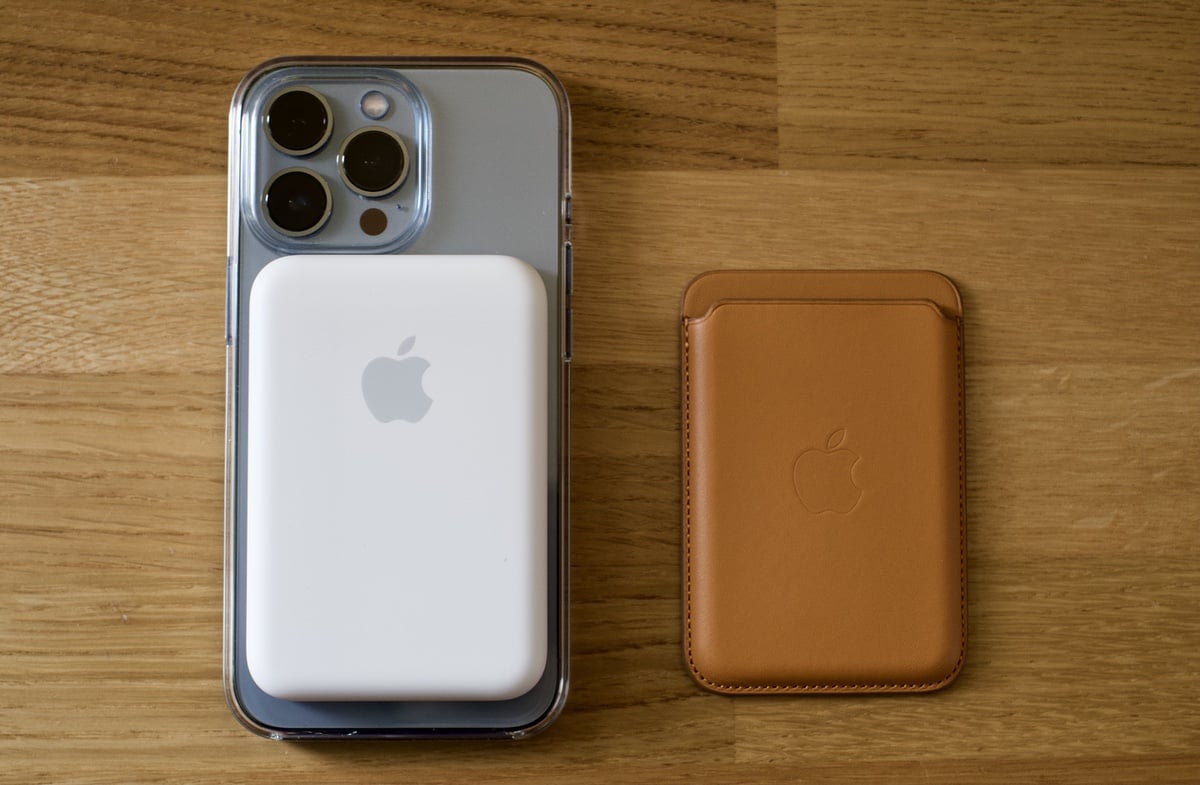 It was designed to fit on the smallest iPhones – the iPhone 12 or 13 mini – so it’s a bit small on the larger phones, but it’s sleek and integrates well with iOS, with a visible display on screen when you connect it. The Battery widget on the iPhone shows its current charge. 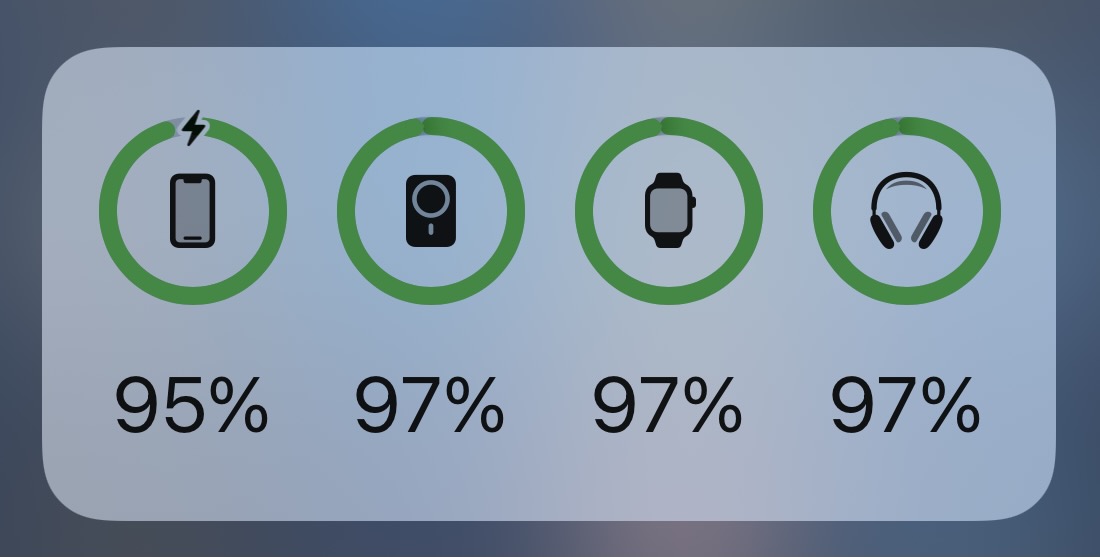 There are some third party battery packs from companies like Belkin, Mophie, and Anker, which are larger, offer more power, and are much cheaper. At $99, Apple’s battery pack is expensive, but it’s slimmer than other offerings, and at 112g, it adds a fair amount of heft to any iPhone.

Apple’s most recent accessory is an updated version of its leather MagSafe wallet, which can hold a couple of credit cards and some cash. This wallet can fall off your iPhone easily, such as when you put it into or take it out of your pocket, but the newest model supports Find My. You can set up Find My to notify you when the wallet has been detached from your iPhone for more than one minute, and you can locate a lost wallet using the Find My app. 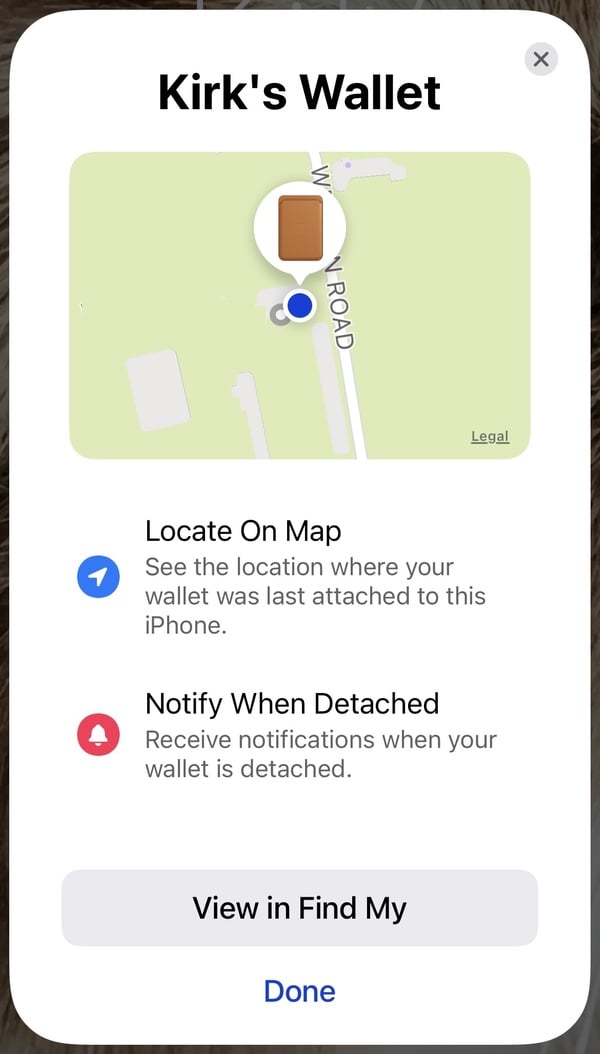 While not technically a MagSafe device, the Apple Watch has always used an induction charger. The charging puck that comes with an Apple Watch is at the end of a cable that plugs into a charger. With the release of the Apple Watch Series 7, Apple introduced the Apple Watch Magnetic Fast Charger to USB-C Cable, which provides a 0 to 80% charge for the Series 7 or Series 8 in 45 minutes, and one hour for the Apple Watch Ultra. To benefit from fast charging, you need a compatible charging brick that provides 18W or more, but you can also plug it into a Mac that has a USB-C connector. 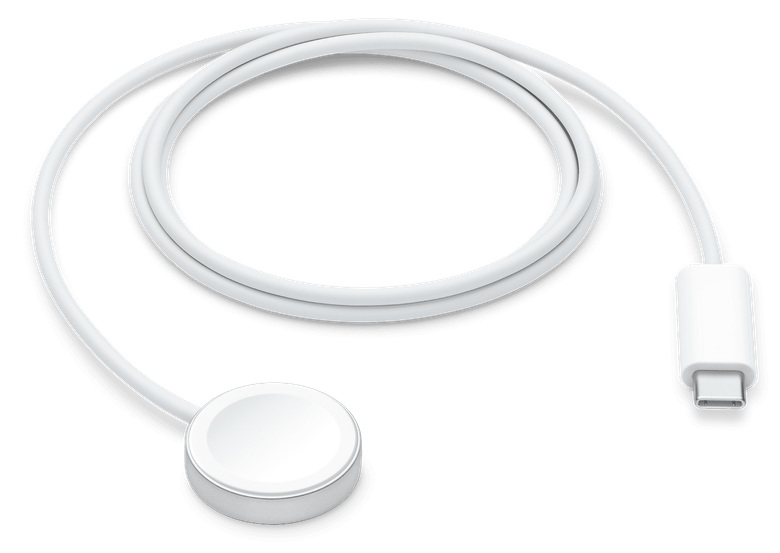 Most MagSafe accessories are about power, but the magnets in iPhones let you use mounts that grip the air vents in a car, and there are some small magnetic tripods that can leverage the magnets in the phone. Belkin’s recent iPhone Mount with MagSafe for Mac Notebooks lets you mount an iPhone on a MacBook Air or MacBook Pro to use as a webcam. This feature, called Continuity Camera, is available in macOS Ventura and later. The company is also releasing a version for the desktop, for iMacs and displays.

There are plenty of MagSafe stands and mounts for iPhones, including car mounts. As MagSafe matures, especially now that it’s a part of the Qi2 charging standard, we’re likely to see more creativity in accessories that take advantage of this feature.