Steve Jobs was an interesting man. He was no saint by any means, but the man is highly regarded as one of the biggest technology visionaries of our time, responsible for the resounding success of Apple and its acclaimed product line. Since his death from pancreatic cancer back in October 2011, movie studios have been scrambling to be the first to release a biopic of the turtlenecked icon. Right now it’s a cinematic arms race between two films, one a big studio production and the other an independent release.

The independent film, titled Jobs, has already been the subject of much debate for choosing to cast Ashton Kutcher in the title role. Kutcher started his career as a male model but is likely best known for his role as dopey stoner Kelso in the long-running television show That 70’s Show. He’s not been praised for his acting chops, however (and yes, I’ve seen The Butterfly Effect), and for the past several years he’s been more known for investments (Pop Chips), tweeting, and getting married to and separating from the much older Demi Moore.

Thus, many Apple fans question how Kutcher will fare playing Steve Jobs and whether he’ll do the legend a disservice or if he’ll surprise everyone with a good performance. This photo depicting Kutcher as Steve Jobs from the 1970’s has some folks convinced that he at least looks the part: 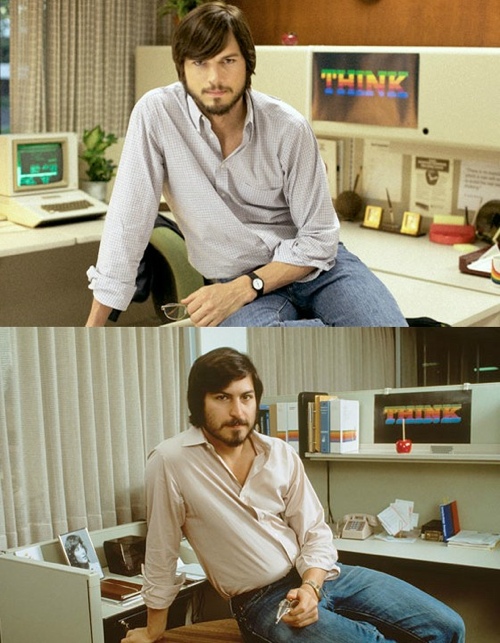 Unfortunately for Steve Wozniak, the cofounder of Apple, it looks as if his Jobs counterpart won’t be also be played by a former male model: 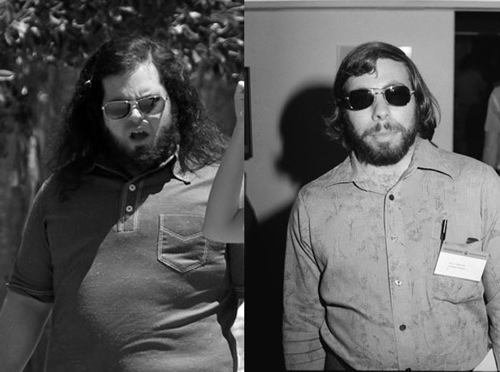 On the right is the Woz, and on the left is Josh Gad, the actor playing him. Gad is best known for appearing in the original Broadway run of The Book of Mormon. He doesn’t look much like Wozniak (and is a wee bit bigger than 70’s era Woz, to put it nicely), but we’ll have to wait and see how the performances go when the movie is released (sometime in 2013).

The second biopic in the works is being written and directed by Aaron Sorkin, the hit-and-miss screenwriter behind The West Wing (good), Studio 60 on the Sunset Strip (meh), The Social Network (good), and The Newsroom (meh). Sorkin is a big name in the business, so this project undoubtedly has more buzz than the independent film; however, at this rate it appears that Jobs will beat the Sorkin project to the big screen. That shouldn’t necessarily dampen interest for the Sorkin production, however, since there have been numerous examples of similar projects being released in the same year with little issue–see The Illusionist vs. The Prestige, Friends with Benefits vs. No Strings Attached (starring Ashton Kutcher, incidentally), any superhero reboot movie that debuts within a couple years of the last one wrapping up, etc.

Are you excited to see a Steve Jobs biopic hit theaters soon? Would you want it to encompass all aspects of his life (personal as well as professional) or just focus on the birth and success of Apple? Jobs certainly has his fair share of skeletons in his closet (denying paternity, various company scandals surrounding labor practices and anti-competitive behavior). Some people may not want to see how the sausage got made, so to speak, and would prefer to remember their idol as a visionary without flaws. Or should Hollywood leave the legacy alone to avoid mucking up his accomplishments?