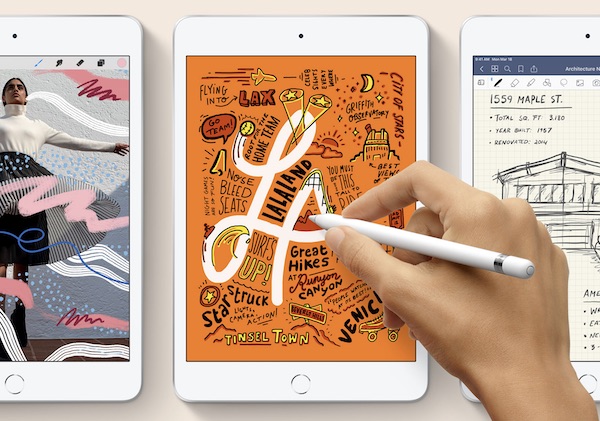 Apple recently updated the iPad mini to its fifth generation. Many people had written off this device, suggesting that the company was going to abandon it. But together with the iPod touch, these petite iOS devices are still widely used. I see the iPad mini used in retail as point of sale devices, and where I live, the iPod touch is used to power the portable terminals that Apple Store employees carry around. Both devices are also very popular in warehouses and other industries.

The iPad mini is also attractive for other uses. For young children, the smaller tablet is easier to use, and if you commute, the 300 g/0.66 lb. device is almost unnoticeable when you add it to your bag of stuff.

It’s easy to appreciate the bigger iPad models because of their large displays, but with the added size comes extra bulk. The iPad Air (10.5″) weighs 456 g / 1 lb., and the 12.9″ iPad Pro is a whopping 631 g / 1.39 lb. Naturally, the use cases for these devices is very different: the largest iPad Pro is great if you need to work on complex spreadsheets, or if you draw or edit photos. Performing tasks like that on the iPad mini is more difficult. 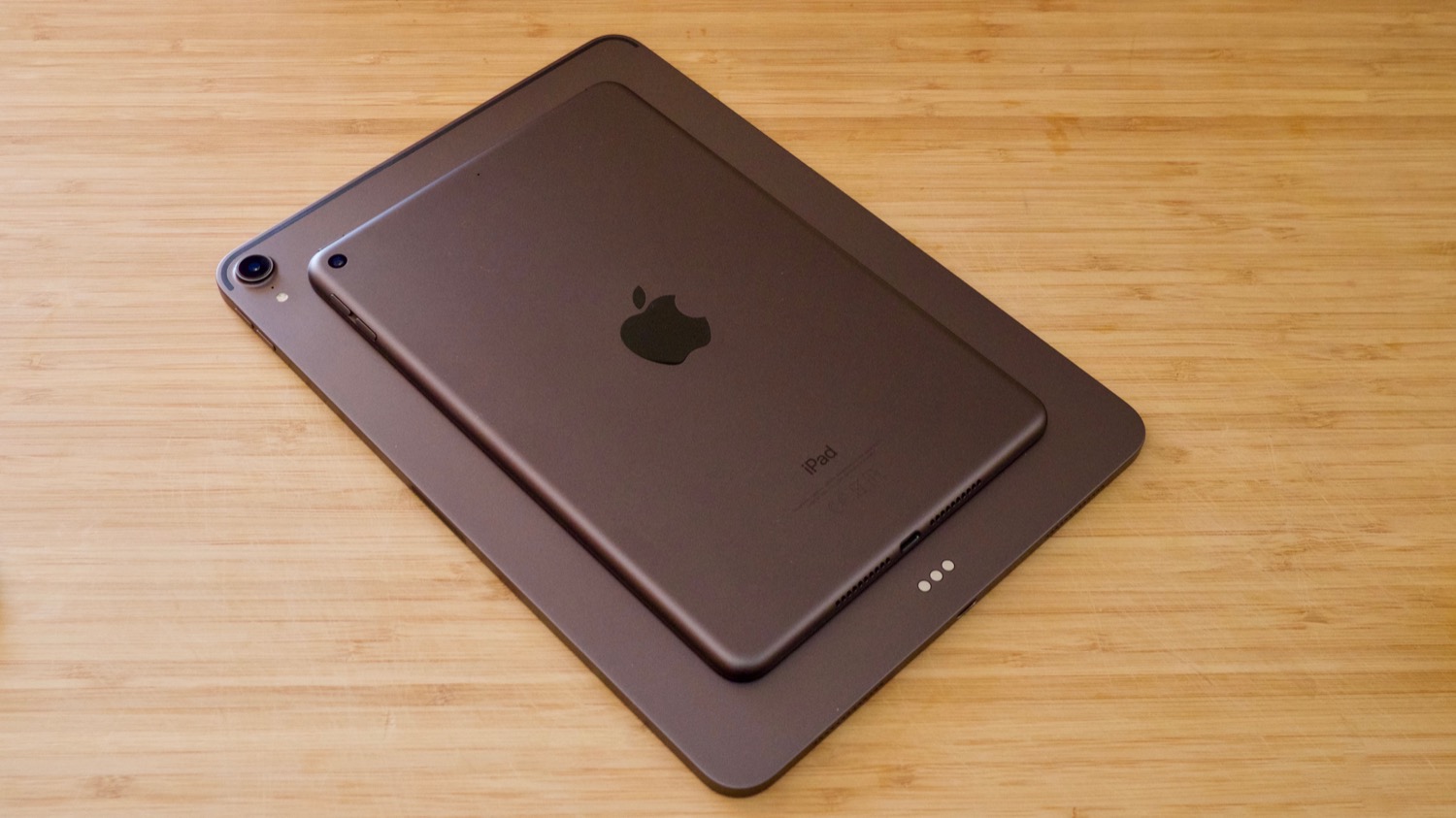 But small can be great for many people. If you use an iPad as a consumption device—to read the web, send email, and work with simple documents—it’s a great little tablet, easy to hold with one hand, and easy to carry around. I especially like it for reading books with Apple’s Books app, or with the Kindle app. It’s like a paperback compared to the hardcover version of the larger tablets, and when using it to follow recipes in the kitchen, it stays out of the way.

With base storage of 64 GB, and an option of 256 GB, the iPad mini offers enough storage for most people. You’d only need the 256 GB if you want to carry around lots of photos, or sync movies or TV shows to the device. After I set up the new iPad mini with some of Apple’s apps (Pages and Numbers, each around 400 MB), about 15 GB was used, leaving plenty of room to add more content.

Apple now has three “non-Pro” iPads. In terms of price, the new iPad mini sits squarely between the sixth-generation iPad (the cheaper model with older internals and just 32 GB) and the third-generation iPad Air:

This small, one-handed device is easy to pick up and use, easy to hold, and doesn’t get in your way. However, the main drawback of the iPad mini is iOS itself. Rather than being specifically designed to work on the smaller device, it is simply scaled down from the larger iPad. (As such, the iPad mini has a pixel density of 326 ppi, compared to 264 ppi for the 10.5″ and 9.7″ models.) This means that reading on the iPad mini is not always as easy as it could be, especially on web pages. I’d love to see Apple provide a specific version of iOS for the iPad mini, being somewhere in between what they use for the iPhone and iPad, so reading can be more comfortable.

When the iPad mini was first released, it was a great compromise between the heft of a full-sized iPad and the smaller screen of an iPhone. Since Apple started selling plus-size iPhones, there’s less of a difference, and if you do have a large phone, you may find it almost as useful as the iPad mini. But if you spend a lot of time lamenting the limited screen space on your iPhone, and want a bit more, the iPad mini might be for you. You can buy a cellular model of the device, with dual-SIM support, for an additional $130, but don’t forget that you can also use the iPhone’s Personal Hotspot feature to share its Internet connection with a Wi-Fi only iPad mini when you’re on the go. 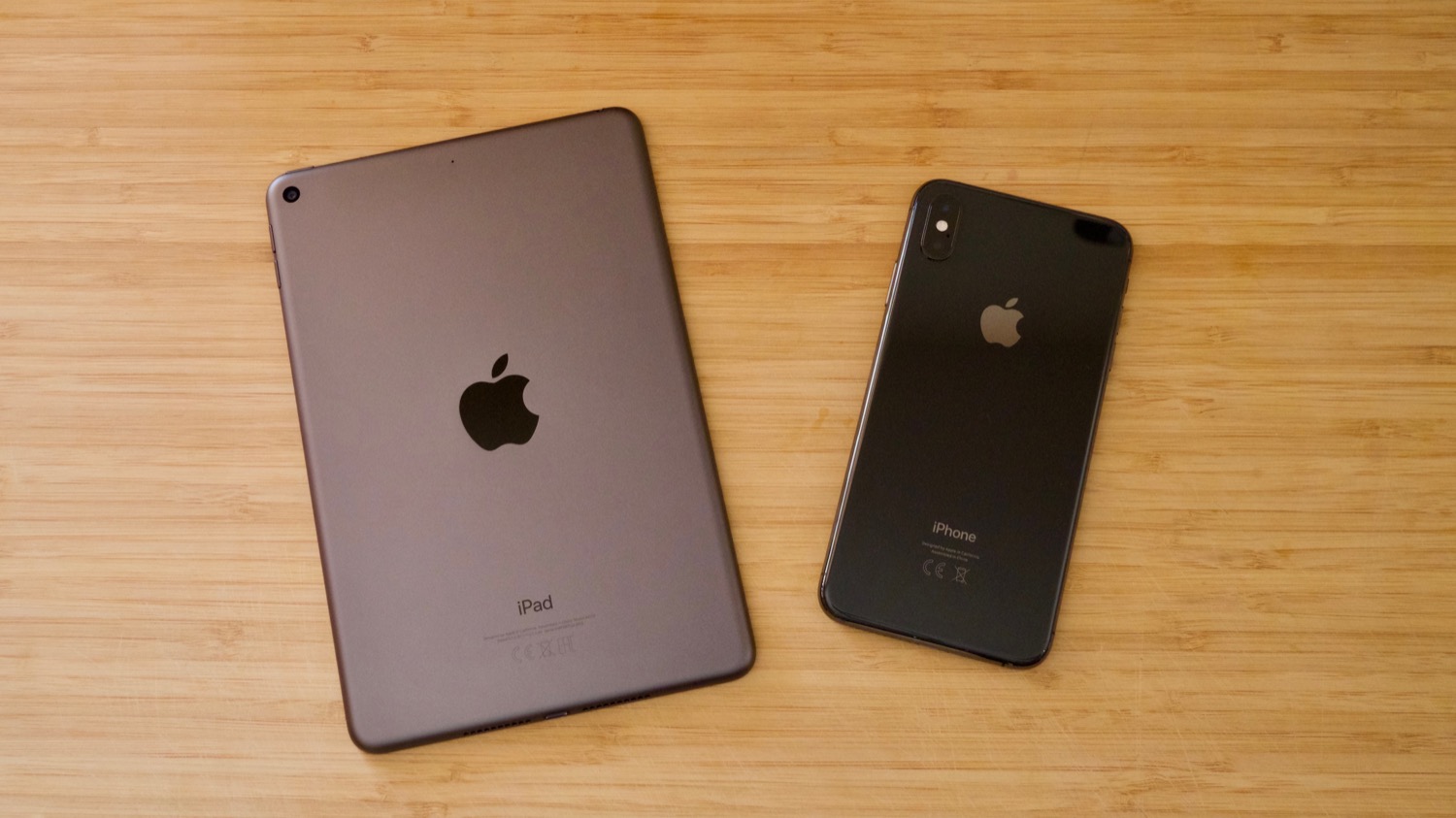 The iPad mini has a headphone jack; remember those? It connects with a Lightning cable—not USB-C, which the iPad Pro line uses. And the display is a big step up from the previous model: the wider color gamut, laminated display, and True Tone (which changes the color temperature of the display according to the ambient light) bring this almost up to Apple’s top specs. The new iPad mini also supports the Apple Pencil (1st generation), and the less expensive Logitech Crayon.

As with previous models, there is no Smart Keyboard, but there is a Smart Cover (and the one for the 4th generation iPad mini works with the new device). You can pair a Bluetooth keyboard if necessary, but you can’t use it easily on your lap with a keyboard, at least using Apple hardware.

Is the iPad mini for you?

The iPad mini isn’t for everyone, but Apple’s updating this device ensures that they have a full range of tablets covering many sizes, prices, and use cases. If you want a small, light tablet, and don’t need the “pro” specs of the more expensive devices, or if you just want an iPad for your young children, the iPad mini might be right for you.

We’ll have an in-depth discussion of iPad topics on this week’s episode of the Intego Mac Podcast, so be sure to subscribe to make sure you don’t miss the latest episode. You’ll also want to subscribe to our e-mail newsletter and keep an eye here on The Mac Security Blog for updates.