Microsoft has released Office 2011 14.4.7 Update for Mac OS X version 10.5.8 or later. These updates improve the security of Microsoft software with fixes for a vulnerability that an attacker can use to overwrite the contents of an affected computer’s memory with malicious code. 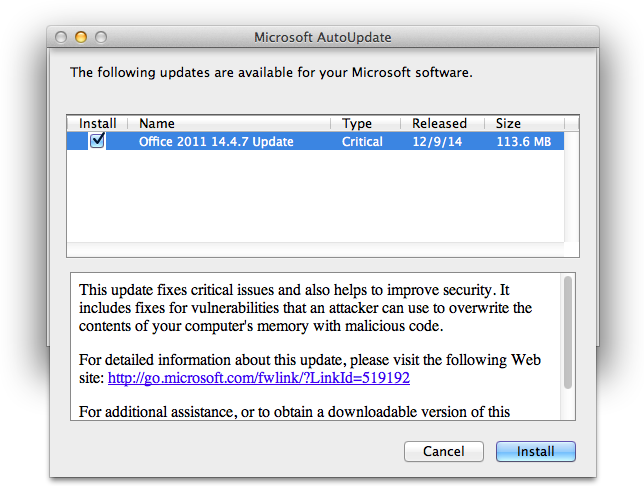 Microsoft further explained that exploitation of CVE-2014-6357 requires that a user opens a specially crafted file with an affected version of Microsoft Office software. There are multiple attack scenarios, as outlined by Microsoft’s security bulletin:

In the third scenario above, however, Microsoft clarified how an attacker might trick Mac users into visiting compromised websites:

An attacker would have no way to force users to visit a specially crafted website. Instead, an attacker would have to convince them to visit the website, typically by getting them to click a link in an email message or Instant Messenger message that takes them to the attacker’s site, and then convince them to open the specially crafted file in an affected version of Microsoft Office software.

We strongly encourage all users running Microsoft Office 2011 for Mac apply these updates as soon as possible. Mac users can update your software by using Microsoft’s AutoUpdate application, or you can visit Microsoft Download Center to get the Office 2011 14.4.7 Update (113.6 MB).