An update for Microsoft Office 2016 for Mac was not released on March 16. “This update will be released as soon as it is available and users will be notified via a bulletin revision,” said Microsoft. However, the tech giant did provide updates to versions of Word, Excel, PowerPoint, OneNote, and Outlook that are designed for Microsoft Office 2016 for Mac. These updates resolve vulnerabilities that could allow remote code execution if a user opens a specially crafted Office file. 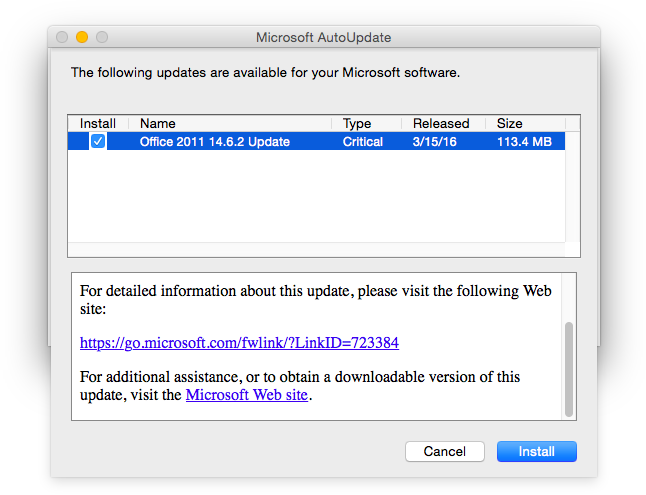 For a complete list of affected versions of Microsoft software, visit this MS support page.

The most critical vulnerability patched in these updates is described as follows:

While not currently being exploited, according Microsoft, the company outlined how an attack could impact users, saying:

Successful exploitation of the vulnerabilities requires that a user open a specially crafted file with an affected version of Microsoft Office software. That said, Microsoft clarified what is and is not an attack vector:

Microsoft’s Office for Mac updates address the vulnerabilities by correcting how Office handles objects in memory.

Office for Mac 2011 users should install the update immediately. Mac users can update your software by using Microsoft’s AutoUpdate application, or by visiting the Microsoft Download Center to get and install Office 2011 14.6.2 (113.4 MB).

Office 2016 for Mac users can get the updates by using Microsoft AutoUpdate. To do this, open a Microsoft Office program, and then click Check for Updates on the Help menu. Otherwise, the updates are also available for download and installation from the Microsoft Download Center: