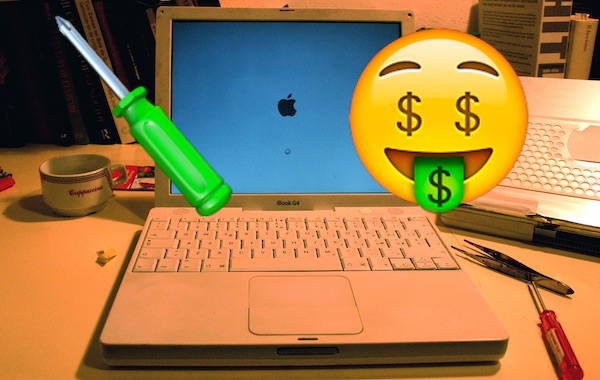 Editor’s note: This guest opinion piece was written by David Balaban of MacSecurity.net.

A lot of people say things like, “Apple needs to change and start listening to its customers, or this will be the end of Apple.” Such opinions are often expressed in reference to certain Apple business practices, especially when it comes to hardware repairs and repairability.

But in spite of such sentiments, from a financial perspective Apple is doing much better now than it ever has before. Is Apple’s financial success a disincentive to customer-centric changes?

There are many notable examples of Apple’s consumer-unfriendly practices when it comes to repairs.

In an undercover investigation, a CBC News reporter took a MacBook with a common display issue to an Apple Store. The Genius Bar technician claimed that the MacBook had water damage, and that it would cost $1,200 to repair. It turned out that wasn’t at all true; an independent repair shop fixed the same MacBook in less than two minutes by simply bending a pin back in place with tweezers.

Apple has also done things like making hardware changes that ensure that nobody can repair new Macs without official Apple diagnostic software. So, if you have a $5,000 machine and it dies, your only option to fix it may be to pay Apple $1,900.

Some of us will have a visceral response to such things and feel that Apple needs to change its practices.

But does Apple really need to change? I want to disagree with this point. I also disagree with people who say that what Apple is doing is actually wrong for their business. Allow me to explain.

Apple is extremely successful, according to the market

Let us take a look at Apple’s stock price. It hit a new all-time high a short time ago. Their market value is marking significant growth over the course of the last year. Seeing such growth rates, some people start to say that Tim Cook may be the best CEO of all time. And that Tim Cook has now added 1 trillion dollars in shareholder value since taking over for Steve Jobs. To me, this is absolutely mind-blowing.

Here is the thing. If a company does something that you find to be atrocious, whether it is how they deal with their customers or how they deal with repairs, how they deal with sustainability, or where their security is going, and then they are rewarded by a doubling of their stock price in a year, that would not likely prompt company decision-makers to reconsider their actions.

Where is Apple’s incentive to change? They may think that their valuation has grown as a result of what they do.

What if anybody in Apple’s senior leadership were to take a step back and say, “Why is it that we are making a product with a chip, for something as basic as charging, that nobody can buy? And when it breaks, customers have no options to fix it besides paying us $1,900. Is this really who we are, or who we want to be?”

If anybody at the company actually asks these genuinely introspective questions, I think they are going to get laughed at by hundreds or even thousands of Apple shareholders who are going to say, ”Why should Apple worry about such concerns? We are worth twice as much now as we were twelve months ago.”

So, why should they change? If their valuation has doubled, are they doing anything wrong? I do not understand this invisible hand of the market, and the self-ruling and self-optimizing capitalist system.

And where does the valuation come from? If you look at this Apple Form 10-K filing, their 2018 net income, one of those stats that you know matters, seems actually close to their 2015 net income. Total equity and the value of all the stuff in this company is down now from where it was a few years ago. So, I do not understand the valuation here. It seems like just a bunch of low-interest rate fed money printing that is causing many people to throw so much money into the stock market and invest so much into companies like this.

Is Apple likely to change for customers’ benefit?

Regardless of what it is that causes the company to be worth that much, why would they change their attitude towards anything if it works?

In spite of this toxic situation, I still think there is intrinsic value in treating customers well. I am fair to my customers not even because I am a nice person or a moral or ethical person; it is simply a business strategy. I believe that treating people respectfully will, in the long term, bring you more revenue. But perhaps there’s a good chance that is wrong!

Operating on a customer-first model will ultimately bring more income to independent repair shops. In their case, it seems to be a better business model than Apple’s sometimes consumer-unfriendly practices.

But looking at Apple’s financial success, maybe not? 🔚

For weekly Apple news and insights, be sure to subscribe for free to the Intego Mac Podcast. You’ll also want to subscribe to Intego’s free e-mail newsletter and keep an eye here on The Mac Security Blog for the latest Apple security and privacy news.

Guest contributor David Balaban is co-founder, editor-in-chief, and head security analyst of MacSecurity.net. David has a crush on all things Apple, boasting over a decade worth of software development, reverse engineering, and computer troubleshooting. View all posts by David Balaban →