Maybe I’ve been lucky, or maybe I’ve just not pressed my luck. I used to see Blue Screens of Death fairly often in my Windows days, but I have yet to see a Kernel Panic since I got my first Macbook in 2003. (Oh no, have I jinxed myself?? What is the proper sacrifice to protect against these things?!)

Here’s the historical explanation: OS X is a Unix-based operating system, so it has some functionality in common with even very early versions of Unix. There was a routine in one of those early versions of Unix that was meant to deal with “fatal errors”; that is to say, errors that are unresolvable. When you get a Kernel Panic on OS X, the screen darkens and you see a multilingual message that tells you to restart your computer. 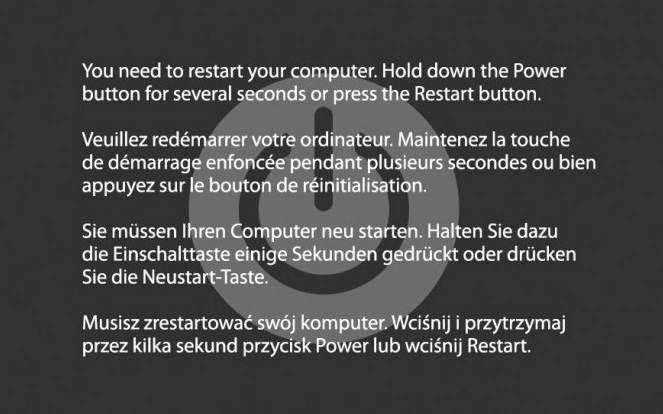 So, this made me wonder – what the heck causes this? Much like a Blue Screen of Death on Windows, this could be indicative of a software problem, a hardware problem, or a conflict of hardware and software. In short, they just mean “something bad happened..

The first thing to do, in any case, is to reboot. You can’t really do much of anything else at this point. The odds are pretty good that a reboot will take care of the problem and you can resume your usual computer activities for the foreseeable future. If that doesn’t happen, even if you don’t go as far as specifically pinpointing the problem, you may be able to do something that gets you back up and running again on your own.

If you’re technically inclined, you can figure out more information by employing basic troubleshooting techniques. That way, you can narrow it down to a fairly specific cause.

Here’s the basic idea for troubleshooting a Kernel Panic:

If none of these things work (or if you just don’t want to be monkeying about with any of this), you should take your machine to a Genius Bar near you. You may not be able to pinpoint the problem on your own – this happens to the best of us from time to time!

While there’s no surefire way to avoid Kernel Panics entirely, they’re a happily rare occurrence for most Mac users. Hopefully you won’t ever need to use this knowledge, but if you ever find yourself in this situation, perhaps now it will seem a little less mysterious.

New to Mac? Let’s get you started on the right track!