Microsoft has released Office for Mac 2011 14.6.4, as well as security updates for Office 2016 for Mac. These security updates provide a fix for a critical memory corruption vulnerability, identified as CVE-2016-0198.

Software affected by the remote code vulnerability includes Microsoft Word for Mac 2011 and Microsoft Word 2016 for Mac. If desired, you can head over to Microsoft’s website for a full list of affected versions of Microsoft Office software, or visit this page MS support page (3155544). 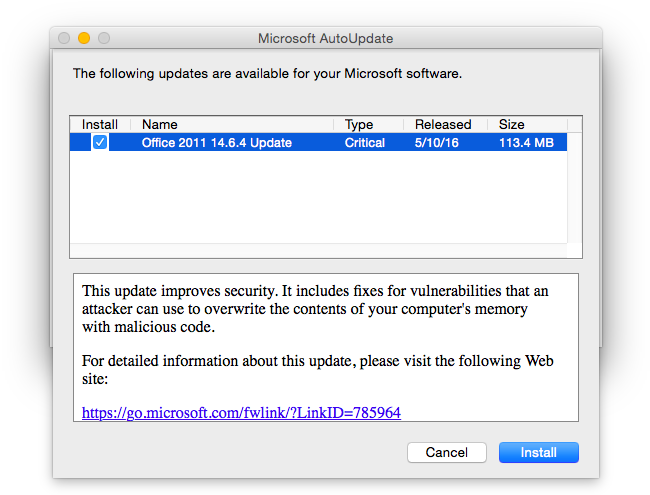 “An attacker who successfully exploited the vulnerabilities could run arbitrary code in the context of the current user. Customers whose accounts are configured to have fewer user rights on the system could be less impacted than those who operate with administrative user rights.”

Common Vulnerabilities and Exposures identifies the vulnerability as follows:

Microsoft addressed the vulnerability by correcting how Office handles objects in memory.

Office for Mac 2011 users should install the update at your earliest convenience. Mac users can update your software by using Microsoft’s AutoUpdate application, or by visiting the Microsoft Download Center to download and install Office 2011 14.6.4 (113.4 MB).

Office 2016 for Mac users can get the updates by using Microsoft AutoUpdate. To do this, open a Microsoft Office program, and then click Check for Updates on the Help menu.