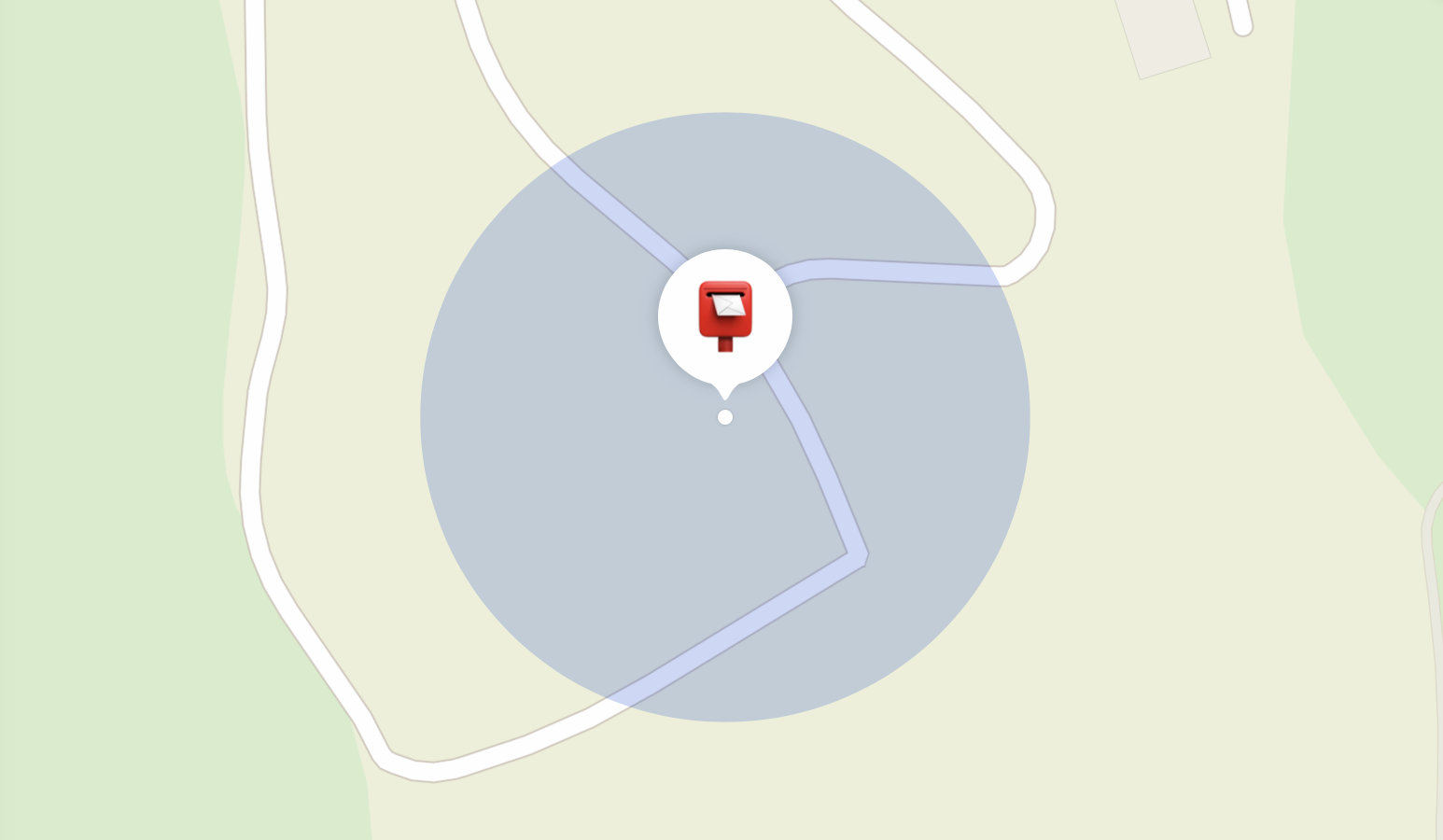 Apple’s AirTags are designed to help you keep track of things. There are many things you can use AirTags to track, beyond the most obvious ideas such as your keys or bag.

But you may also be able to use an AirTag to track a package. I sent one in the mail to a friend, and followed it across the country. Here’s what happened.

I live near Stratford-upon-Avon, in the United Kingdom, and I sent the AirTag to a friend south of London. I mailed this AirTag on Friday afternoon, and, with first-class postage, I expected the envelope to be delivered the next day.

The AirTag weighs a mere 11g, so I put one taped to a card, then in a small bubble envelope for protection. I dropped it in the mailbox in my village, just down the road from my home. I made sure to open the Find My app on my iPhone when I was next to the mailbox; it showed the correct location. 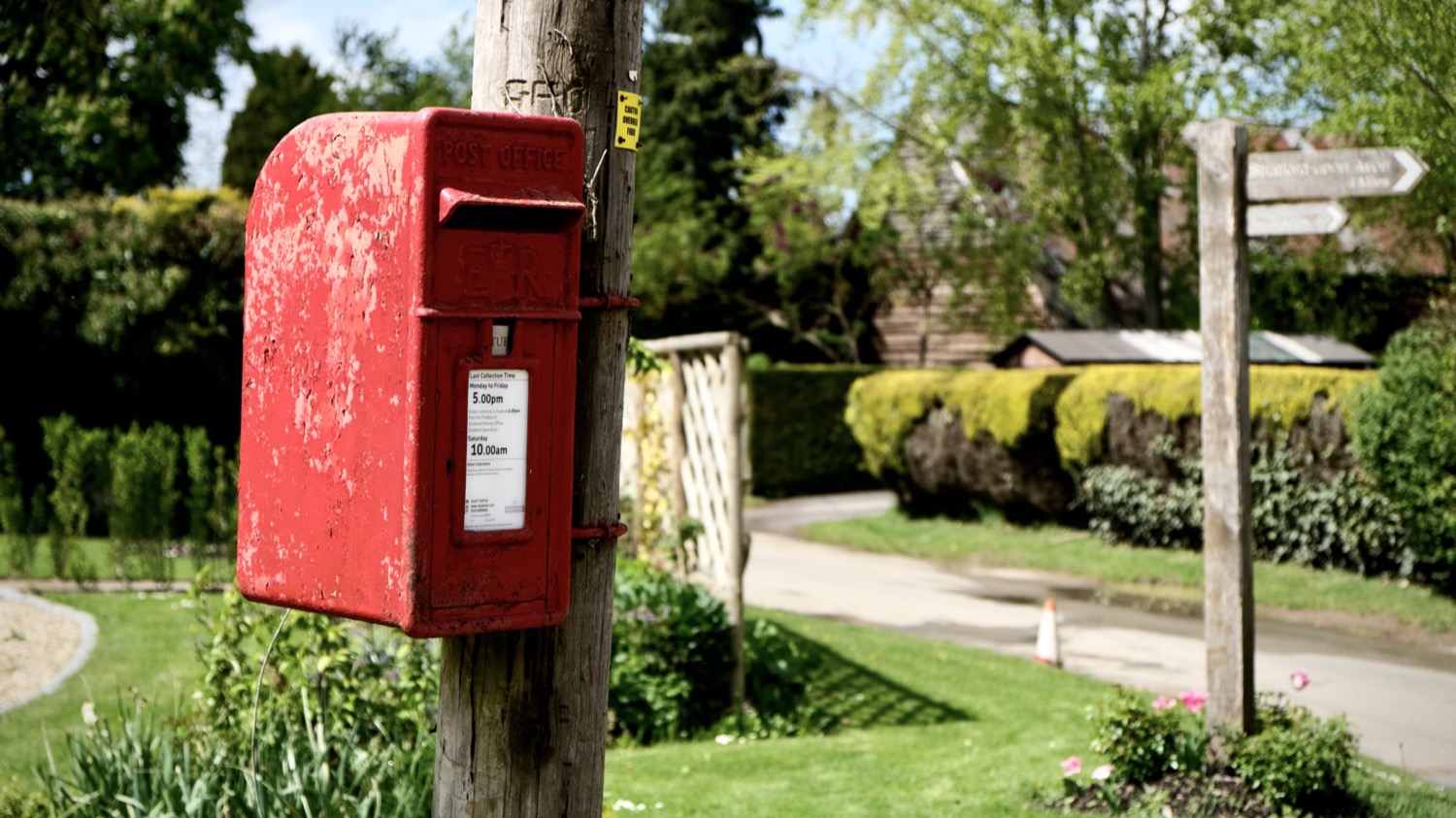 Mail is picked up around 5 pm, and a bit later than that, I checked the Find My app on my iPad. At 5:28, I found that my AirTag had reached the local sorting station. 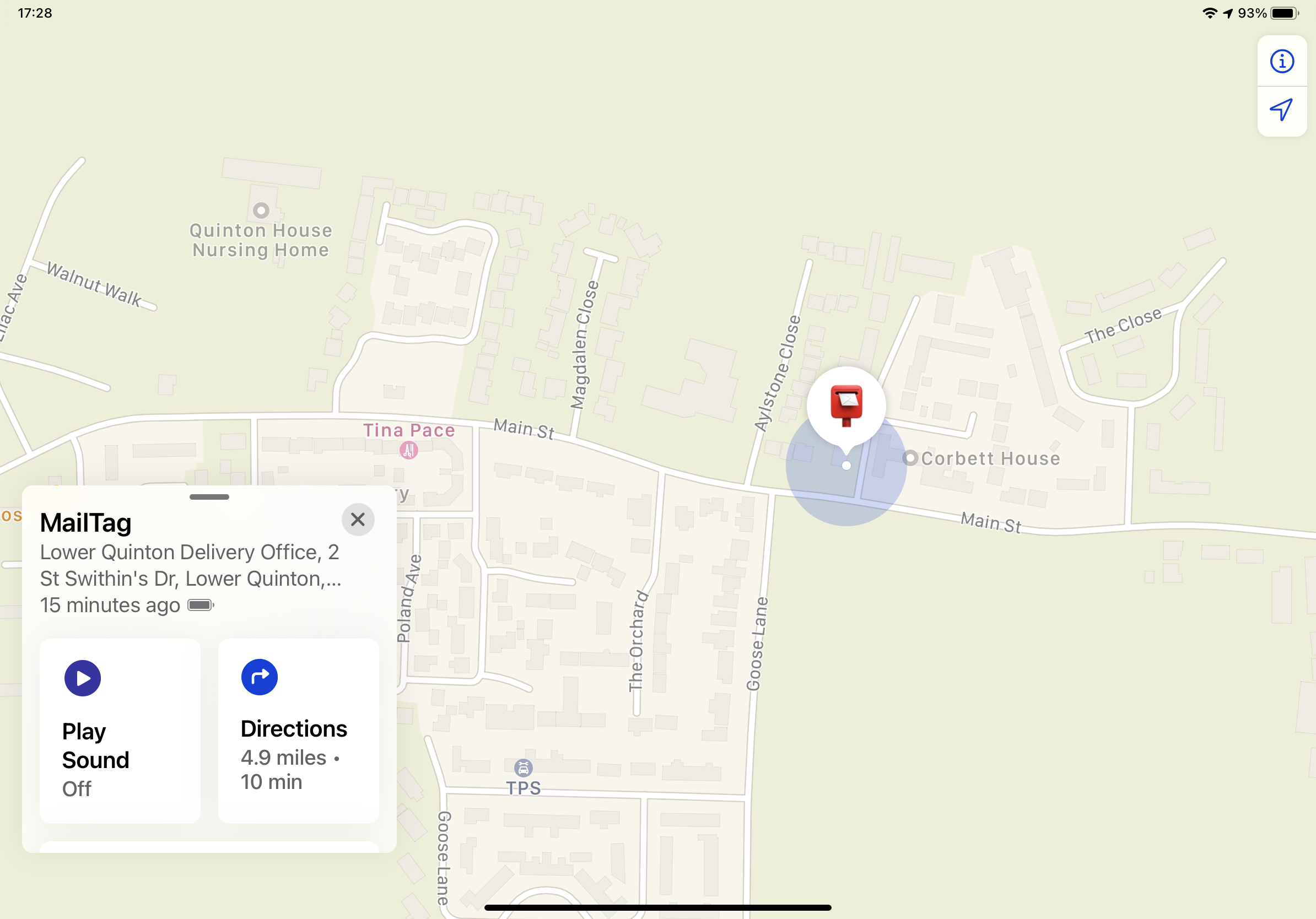 This means that someone, either the mailman who picked up the mail and delivered it to the sorting station, or another employee at the sorting station had an iPhone, which spotted the AirTag. Apple touts their network of nearly a billion devices capable of spotting AirTags, and if there are that many, it should be easy to track this envelope across the country.

Related: How Tough are AirTags? We Froze, Washed and Dried, Ran Over, and Put Them in the Hot Sun

It didn’t take long for my AirTag to start its journey. At 5:49, it had started moving, going into Stratford-upon-Avon, presumably for it to be loaded on to a truck to go to the next location. At around 6:40, it had left the town, heading north. 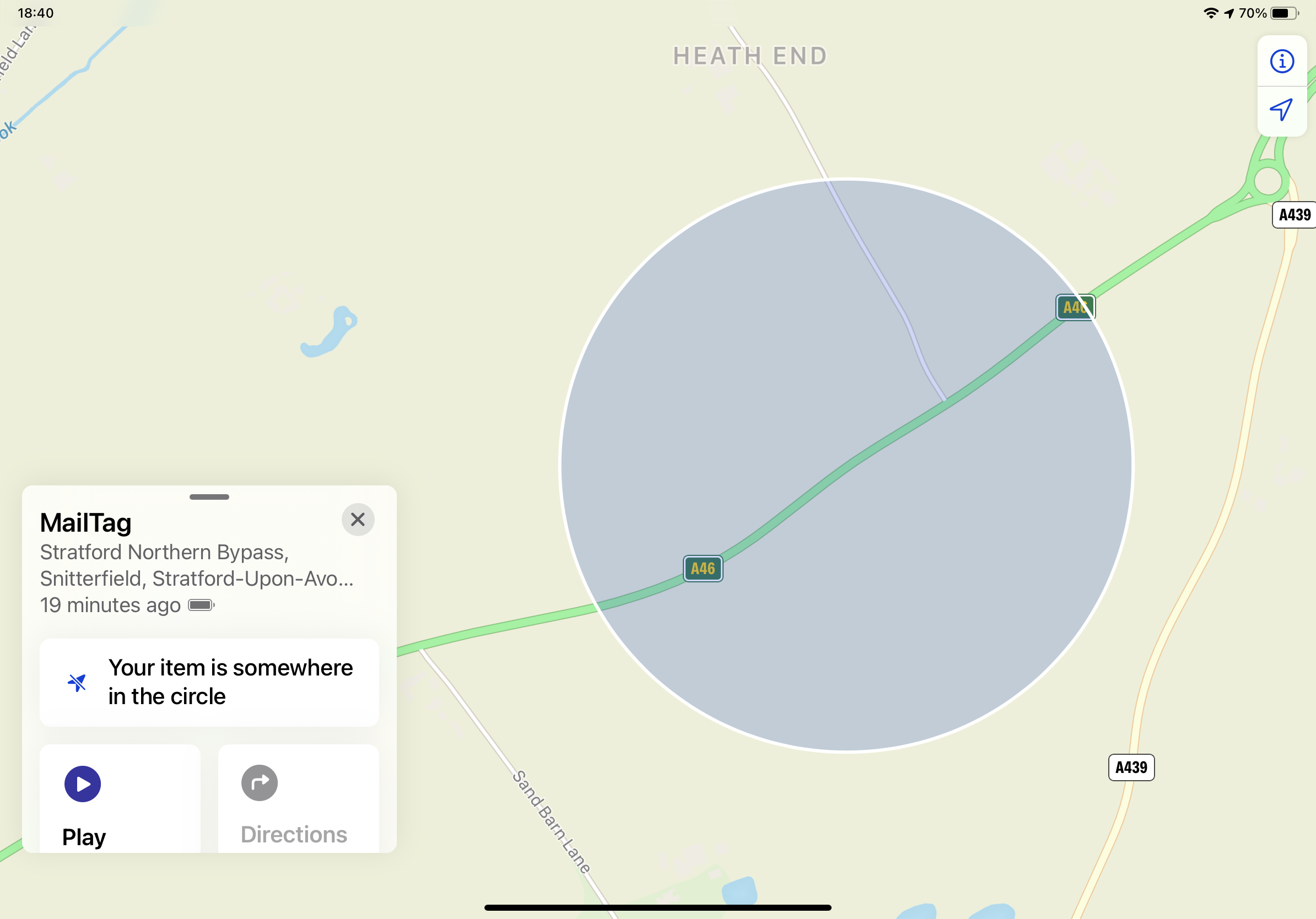 At 7:30, it reached the South Midlands Mail Centre, a “highly automated mail processing centre,” a massive warehouse-like site where mail is sorted. The presence of even one employee with an iPhone, with Find My turned on, was enough to register this location, but it’s likely that many of the employees have iPhones.

I had set up a script on my Mac to take screenshots of the Find My app every two minutes, and these show the journey of the AirTag across the country. At 10:08 pm, the AirTag was on the road, and here’s its progress through the night and the following morning. The duration of each image in the video does not represent how much time has passed.

There were a couple of stops along the way, where presumably some mail was transferred to other vehicles, and by 6:45 am, the AirTag had reached the final sorting office near where my friend lives. He received delivery in late morning.

After the AirTag was delivered, my friend left the envelope on a table in his house. He has an iPhone, so I expected him to be notified of the presence of the AirTag after a while. According to Apple, anyone who is in the presence of an AirTag that has been separated from its owner for three days will get an alert on their iPhone. They are supposed to get an “AirTag Found Moving With You” message. It’s possible that this alert only displays when the person is actually moving with the AirTag, but that seems somewhat limiting; imagine that you leave an AirTag in someone’s bag at their home, but they don’t take the bag with them right away. Should it take another three days for them to get an alert? Apple isn’t clear enough about the way to prevent AirTags from being used by stalkers.

Apple also says that “When moved, any AirTag separated for a period of time from the person who registered it will make a sound to alert those nearby.” Again, this is supposed to be three days, and the sound apparently only plays for 15 seconds, and isn’t very loud, according to this Washington Post article. My friend thinks he might have heard a sound at some point, but he couldn’t be sure, because he had the TV on at the time. 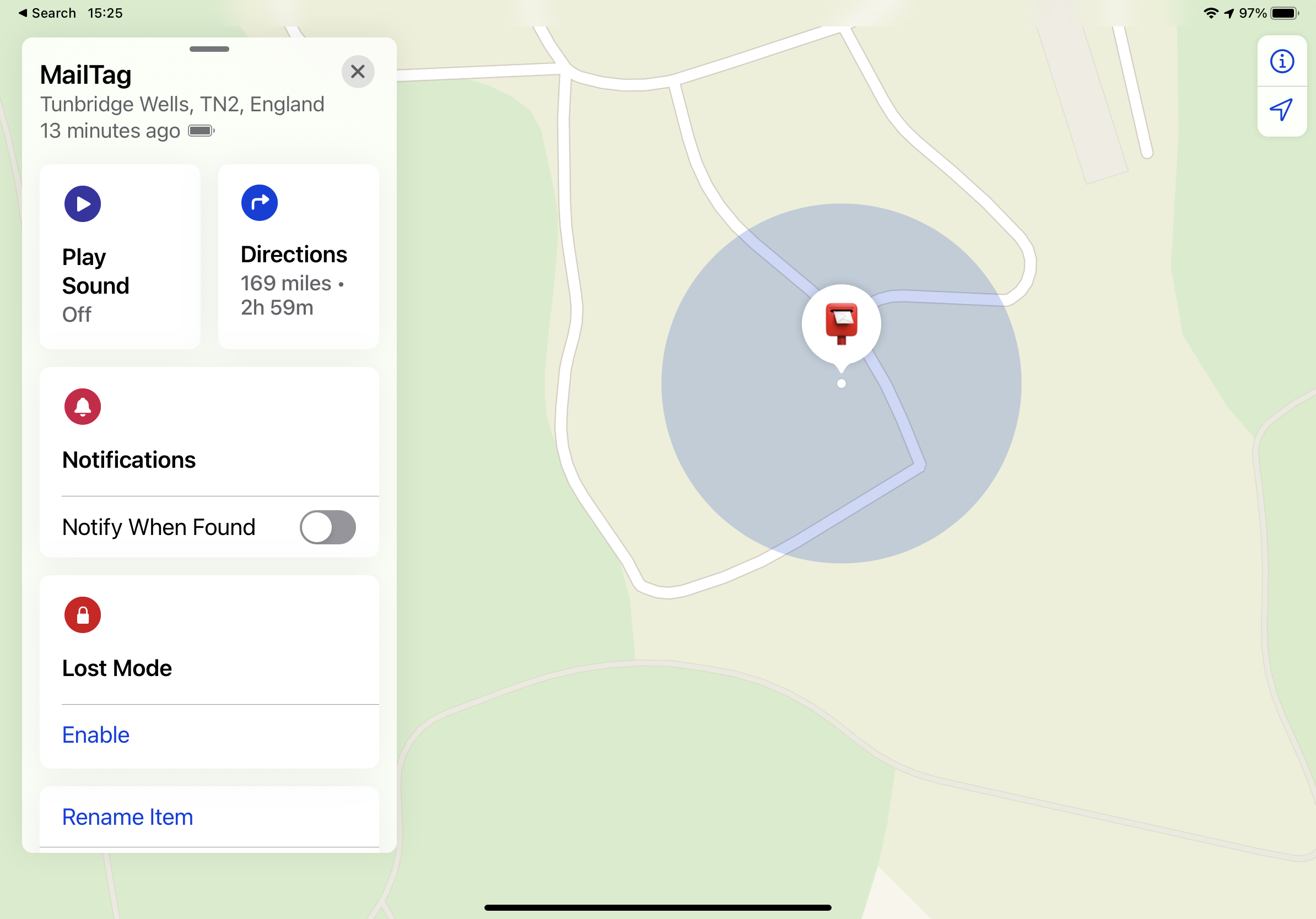 The point of these alerts is to let people know if they’re being tracked surreptitiously by someone who placed an AirTag in their bag, their pocket, or their car. Three days is already much too long, but the fact that no audible sounds or alerts are occurring after four days is disturbing.

AirTags aren’t designed to track something in movement; this isn’t like a Tom Cruise movie, where spies track a car in a city, seeing exactly where it is in real time. They are meant to be used to find lost keys, luggage, or other objects. But my experiment shows that you can track these devices to a certain extent.

I don’t know if any of the truck drivers carrying the mail didn’t have iPhones. Even if they didn’t, it’s possible that if someone in a car driving next to the truck has an iPhone, then it would be spotted. Since AirTags use Bluetooth 5, the range is around 100m, but that depends on such things as interference, walls, and other obstacles, and testing would need to be done to find how efficient they are in motion.

It’s also not clear how often AirTag locations update. I gave my partner an AirTag last week for her to take when she went on an errand, driving about 20 miles from home. Since she has an iPhone, I expected to see frequent updates in the Find My app, but that wasn’t the case. It seemed that when she was on the road, there weren’t many updates, but when she got to a shopping mall – where there are lots of people with iPhones – it updated much more often. Curiously, it updated at one location on the road in both directions, which was when she drove around a large roundabout. Perhaps when the device is traveling fast, there are less frequent updates, and when it slows down, it updates more often.

Obviously, if your device is in an area with fewer iPhones around, you won’t be able to track it, or find it. In more remote or rural areas, this will be more difficult, but in most situations, there’s a good chance that someone with an iPhone will be near your AirTag if it gets lost. This experiment also shows that if, for example, you’ve taken a flight and the airline has lost your luggage, you’ll have a good chance of keeping track of where it is.