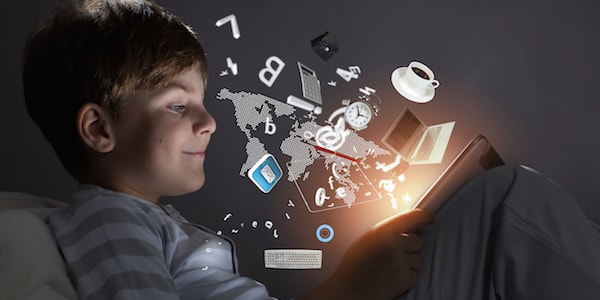 For parents, the Internet can be as much of a curse as it is a blessing. Whether you worry about how much screen time to give your toddler or how to oversee your teenager’s online presence, these recommendations will help you navigate Internet access for kids from age one to eighteen.

At this stage of your child’s life, limit Internet access as much as possible. In fact, the American Academy of Pediatrics recommends no screen time for children under the age of two. Instead, engage your child with stimulating activities such as conversation, singing, reading, and other play.

This may seem surprising, considering the number of apps designed for infants and the growing amount of entertainment targeted at young children. However, programs and apps marketed as educational have actually been debunked in recent years as they don’t prove effective for infant learning.

Of course, complete isolation from screens is impossible with the amount of time adults spend on phones and the number of screens visible everywhere we go. Babies will undoubtedly begin to recognize the influence of screens around them, but your baby will benefit more if you explain these curiosities to her rather than giving her time alone with a screen.

Instead of removing the smartphone from your baby’s hand as she begins to scroll through photos, try to stay positive. Say something like, “Look, you’re making the pictures move with your finger just like me!” and proceed to replace it with an approved distraction.

The first two years of a child’s life can be challenging. With so many adjustments—from teething to sleep training—infants demand attention at every turn. These critical months and years should be spent focused on your child’s needs, rather than a computer screen.

Although your child will become more involved in day-to-day activities when she is a toddler, Internet access should continue to be minimal, shared, and interactive.

Setting these limitations may be difficult if you’re accustomed to spending hours on your cellphone or other devices daily. It is natural to fill your child’s schedule with the same entertainment—but try to use alternatives instead.

The American Academy of Pediatrics recommends that toddlers have no more than two hours of screen time a day. These cognitive years are crucial to brain development and interaction, and decades of studies on the effects of excessive screen time show that overexposure to screens can lead to obesity, poor performance in school, sleep disruption, and decreased attention span.

While smart devices may seem like a great distraction for your toddler—and a way to get a moment of peace—it’s important not to let screens become babysitters. If your child is interested in a specific game or app, be present and involved in her interaction.

Skype and FaceTime are other examples of healthy screen time experiences you can share. It’s common to expose babies and toddlers to these apps when you communicate with distant family members. As long as you’re involved and don’t spend more than two hours a day video chatting, your child can benefit from the experience. Using the Internet with your toddler as a shared learning experience will benefit her more than alone time with the device.

This is a great age to introduce your child to the Internet, as they will likely have supervised digital learning at school. With this increased exposure to the Internet, educate your kids on proper online etiquette and the various dangers of the web.

As a parent, a primary concern for your child on the Internet is cyberbullying. Even children who wouldn’t do so in person sometimes feel more comfortable making harsh remarks about others when they’re behind a computer screen. This kind of behavior can begin as soon as children get a cellphone or social media accounts. It may seem young to worry about cyberbullying, but by age six, nearly all children have their own cellphones—and thus, access to the Internet.

According to the Cyberbullying Research Center, an average of 27 percent of children have been cyberbullied. However, NoBullying.com states that only 10 percent of kids report these incidents to their parents. As your children begin using smartphones or social media, teach them to treat others with respect and to report any hurtful or inappropriate messages.

RELATED: 10 Things to Tell Your Kids Before Giving Them a Smartphone [Checklist]

Predators are another concern once children gain more Internet access. They can use social media to find out children’s interests, places of residence, schools, and specific locations. Often, these people will pose as children on social media in attempt to connect with other children, so teach your kids to communicate with only people they have met in person.

At this age, Internet access is almost a social necessity, but you should still play a role in your teenager’s online safety. This is an appropriate time to get your child a phone with Internet access and educate them on the dangers of identity theft and inappropriate content.

As teenagers get jobs and bank accounts, they can become extremely vulnerable to online theft and credit fraud. Though many teenagers aren’t concerned about identity theft, they are still at risk. Make sure your child knows not to give out her Social Security number or debit card information.

Another difficulty with teenagers is the role Internet access plays in romantic relationships. Sexting and other inappropriate messaging can lead to devastating cyberbullying, especially as relationships end. Make sure your children understand the risks of oversharing pictures and personal information with their peers.

According to one study, parents more closely monitor the web use of younger teens, but it’s important not to neglect your older teen’s online behavior. If you choose to look at web histories or install parental control programs, such as Intego ContentBarrier (also included with Mac Premium Bundle), discuss these actions with your teenager beforehand. With a heads up, she’s less likely to feel her trust has been betrayed and may be more cautious online.

Whatever age your child is, rest assured that you have all the tools you need to create a safe and healthy environment for them online.

Sarah Brown is a tech specialist with a love of all topics relating to the IoT. She writes about upcoming technologies, internet safety cyber security. Sarah believes that the through technology and the written word, we can all stay connected to each other and create a safe environment out in the ether. View all posts by Sarah Brown →