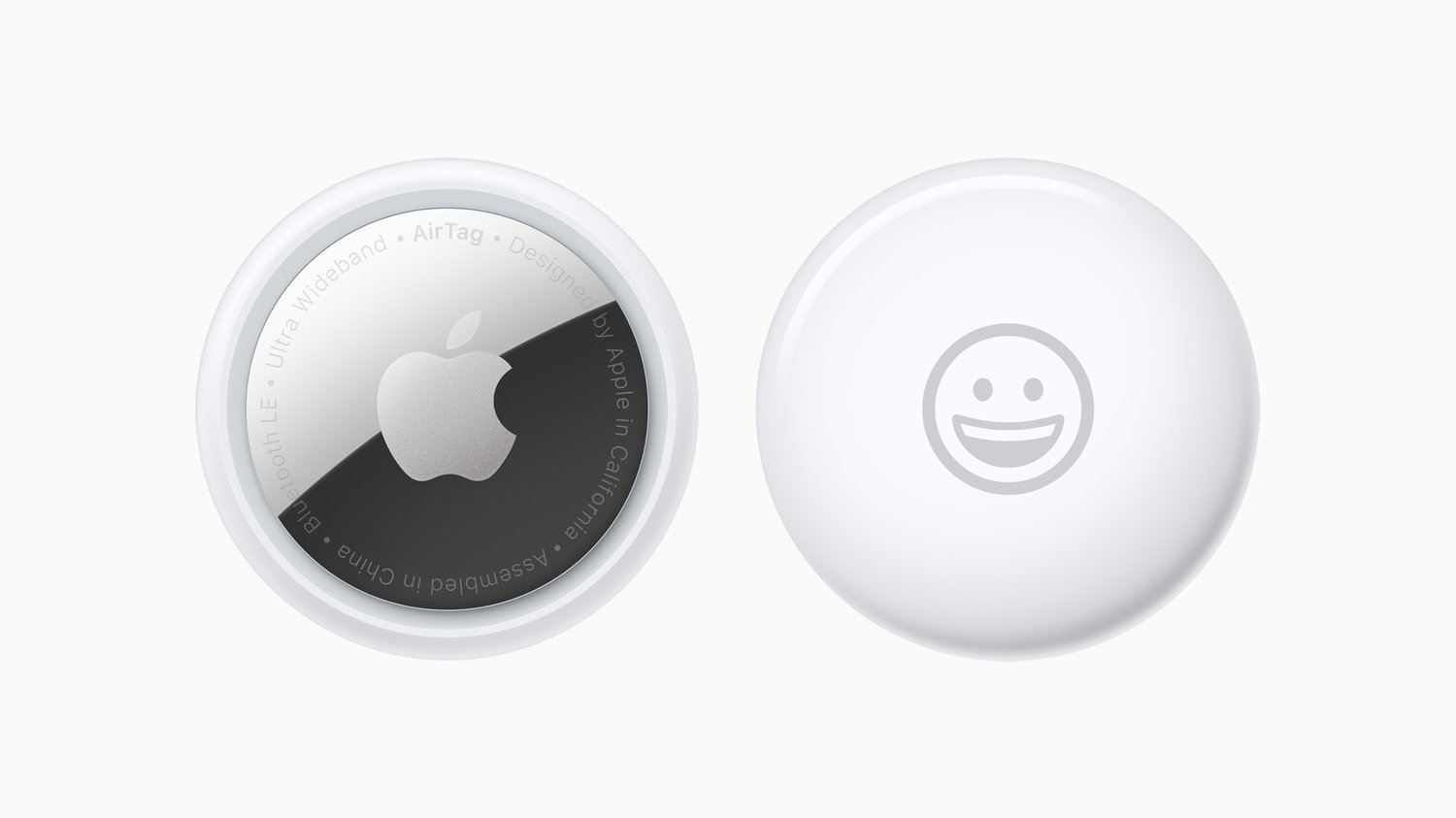 Rumors started circulating last weekend that the German airline Lufthansa might be banning Apple’s AirTag tracking devices. AirTags are commonly used to track the exact location of luggage or other items.

Reply tweets from the airline’s verified Twitter account appeared to confirm this. Supposedly, according to the tweets, “activated AirTags” were “classified as dangerous.”

Meanwhile, an aviation magazine reported that Lufthansa had privately stated pretty much the opposite.

So what’s really going on? Are airlines banning AirTags? Are AirTags dangerous?

We reached out to Lufthansa and air transport standards organizations for comment. Here’s the full story.

A Twitter user asked Lufthansa on Saturday, October 8, whether the rumor about the airline banning AirTags was true. One of Lufthansa’s social media representatives replied:

Hi David, Lufthansa is banning activated AirTags from luggage as they are classified as dangerous and need to be turned off./Mony

Hi David, Lufthansa is banning activated AirTags from luggage as they are classified as dangerous and need to be turned off./Mony

The following day, another Twitter user followed up by asking why Lufthansa believed that AirTags were dangerous. A different Lufthansa social media rep replied:

According to ICAO guidelines, baggage trackers are subject to the dangerous goods regulations. Furthermore, due to their transmission function, the trackers must be deactivated during the flight if they are in checked baggage and cannot be used as a result. /Ana

According to ICAO guidelines, baggage trackers are subject to the dangerous goods regulations. Furthermore, due to their transmission function, the trackers must be deactivated during the flight if they are in checked baggage and cannot be used as a result. /Ana

Based on these official statements, it seemed as though Lufthansa had chosen to prohibit AirTags because of its interpretation of the technical specifications of ICAO. The International Civil Aviation Organization is a United Nations agency that sets standards for flight safety, among other things.

Meanwhile, Airways Magazine contacted Lufthansa to ask for confirmation or denial of “multiple reports” about its alleged ban of Apple’s AirTag tracker. Lufthansa reportedly stated to Airways that it had:

… not banned airtags [sic] and there is no guideline or regulation by Lufthansa to ban airtags [sic]. There is a standing ICAO regulation on such devices, but this has nothing to do with Lufthansa or any other carrier.

Based on this private statement to Airways, it seemed that Lufthansa itself was not banning AirTags. Rather, it seemed, Lufthansa believed that AirTags ran afoul of an ICAO safety standard.

If the ICAO was truly classifying AirTags as dangerous, then presumably AirTags would not be permitted on other airlines, either.

The Airways article had no further mention of ICAO. However, it mentioned another standards organization, the International Air Transport Association. The IATA, it said, “establishes the rules for what can and cannot be carried on board and publishes them in their ‘Dangerous Goods Regulations’ manual.”

Since Lufthansa’s public and private comments on the matter seemed to be at odds with each other, and since two standards bodies were being brought up in this context, I contacted all three parties and asked each for comment.

On October 11, a Lufthansa corporate communications senior manager replied to my inquiry. Here is the full statement that Lufthansa provided:

The Lufthansa Group has conducted its own risk assessment with the result that tracking devices with very low battery and transmission power in checked luggage do not pose a safety risk. We have never issued a ban on devices like that. It is on the authorities to adapt regulations that right now limit the use of these devices for airline passengers in checked luggage. We are in close contact with the respective institutions to find a solution as quickly as possible.

I kindly ask for your understanding that all questions regarding ICAO and IATA guidelines should be addressed to these respective bodies.

In short, Lufthansa doubled down on what it had told Airways Magazine, that it had not issued a ban on AirTags. In fact, Lufthansa believed that AirTags “do not pose a safety risk.”

Again, this seems quite the opposite of the claims that the company’s social media representatives had claimed on Twitter. It seems reasonable to assume that the word of a senior manager of corporate communications is much more authoritative than that of social media account handlers only known publicly by their first names.

The next to reply, also on October 11, was an IATA corporate communications spokesperson, who stated the following:

There are no specific regulations for AirTags. As they contain lithium batteries and emit a continuous Bluetooth signal, AirTags and other baggage tracking devices fall under the category of personal electronic devices (PED) for regulations concerning their carriage by travelers. The PEDs category also includes mobile phones and tablets which have similar characteristics but with significantly more powerful batteries.

The International Civil Aviation Organization sets global standards for the carriage of dangerous goods. Currently these regulations do not permit the carriage of PED in checked baggage unless the PED is completely turned off.

The potential safety risks of AirTags, however, appear to be minimal. Trackers contain very small lithium-ion batteries, and the Bluetooth emits a level of electromagnetic radiation that is below the threshold specified by the US Federal Aviation Authority (FAA) and the European Aviation Safety Agency (EASA) for safety concerns.

Industry consensus is building towards exempting Air Tags [sic] and other trackers provided that the lithium cell does not exceed a certain level and the tags only use Bluetooth. IATA will request the immediate consideration of this by the ICAO Dangerous Goods Panel which will meet next month (November 2022)

IATA’s statement sheds more light on the problem. Although there appears to be an almost universal belief that AirTags do not pose a significant safety risk, they technically fall under an existing standard that lumps them in with devices with much larger batteries such as smartphones and tablets. AirTags are powered by small, coin-sized CR2032 batteries, which are commonly found in (non-smart) wrist watches.

Notably, the IATA says that it will ask the ICAO’s Dangerous Goods Panel to consider updating the relevant standard, potentially as soon as next month, November 2022.

This morning, on October 12, an ICAO communications officer replied with the following statement:

Although ICAO is a standard setting body, under the 1944 Convention on International Civil Aviation the regulation of air transport remains a sovereign state responsibility. Governments enhance the safety of the global flight network as a whole by agreeing on common standards through ICAO, which they then transpose into their national regulatory frameworks.

As such, ICAO is not in a position to comment on the implementation or interpretation of ICAO specifications by states or by the operators they regulate.

Having said that, we are in a position to provide you with our technical specifications.

I would like to draw your attention to the attached excerpt from this Document.

I hope this is helpful to you.

The attached excerpt is shown below: 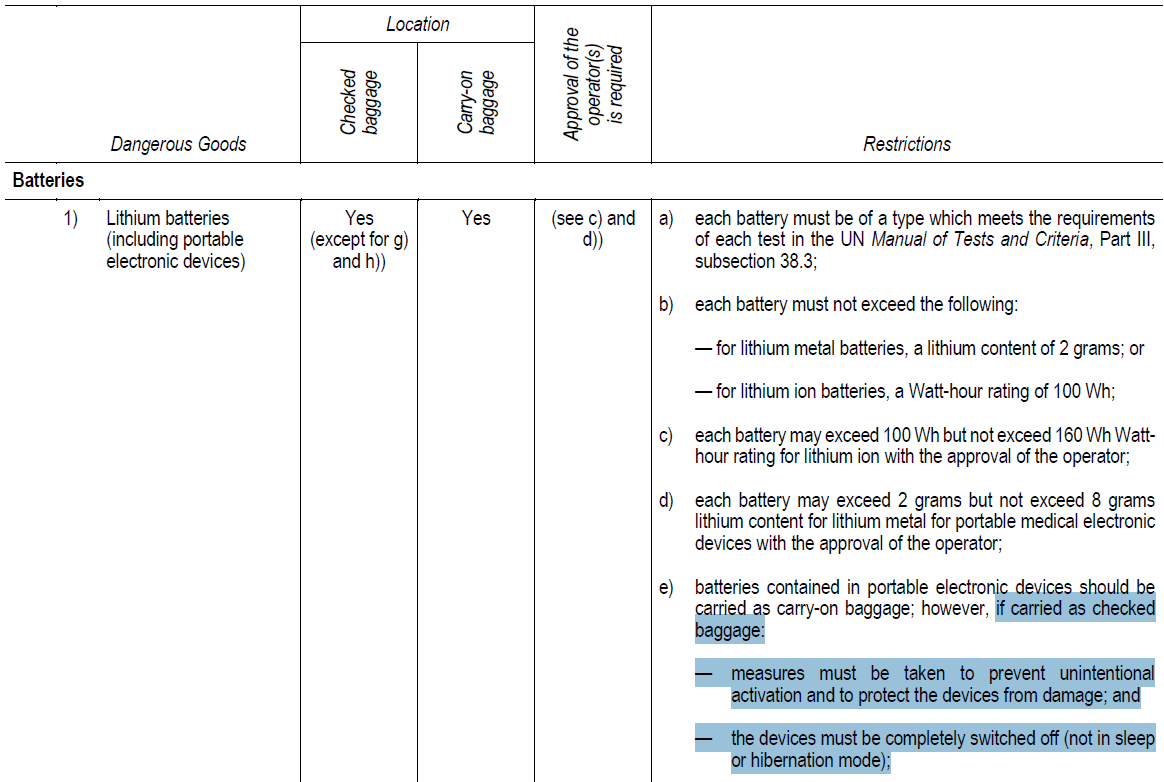 The snippet shows that lithium batteries are listed as “dangerous goods.” The highlighted section of the “restrictions” column states:

[batteries contained in portable electronic devices should be carried as carry-on baggage; however,] if carried as checked baggage:
— measures must be taken to prevent unintentional activation and to protect the devices from damage; and
— the devices must be completely switched off (not in sleep or hibernation mode);

In summary, a strict interpretation of these ICAO guidelines could mean that activated AirTags in checked luggage are a violation of the “dangerous goods” safety standard. However, the implementation or interpretation of the standard is actually up to “states or … the operators they regulate” to make, not the ICAO itself.

This afternoon, October 12, the Lufthansa corporate communications senior manager again reached out to me with an additional comment:

The German Aviation Authorities (Luftfahrtbundesamt) confirmed today, that they share our risk assessment, that tracking devices with very low battery and transmission power in checked luggage do not pose a safety risk. With that, these devices are allowed on Lufthansa flights.

The same statement was also made publicly on one of Lufthansa’s official, verified Twitter accounts:

The German Aviation Authorities (Luftfahrtbundesamt) confirmed today, that they share our risk assessment, that tracking devices with very low battery and transmission power in checked luggage do not pose a safety risk. With that these devices are allowed on Lufthansa flights.

As a reminder, Lufthansa is a German airline. Now that the German Federal Aviation Office has stated their agreement that AirTags do not pose a significant safety risk, Lufthansa can confidently state that AirTags are permitted on its flights—even in checked luggage.

According to a New York Times article published today, while this Intego article was in the works:

Apple [said] its trackers comply with all airline safety regulations.

In the United States, that was confirmed by the Federal Aviation Administration [FAA] and the Transportation Security Administration [TSA]. The European Union Aviation Safety Agency [EASA] said that its regulation did “not in itself ban or allow” the trackers, but that operators had the right to determine which devices were safe to use in flight.

An F.A.A. advisory from 2017 allows devices to use low-powered wireless communication like Bluetooth on board planes in the United States. In a statement on Monday, the Transportation Security Administration confirmed Apple’s view that “tracking devices are allowed in both carry-on and checked bags.”

A social media representative of the TSA also commented last Friday that, at least as far as the United States is concerned, “Wireless tracking devices are allowed in both carry-on and checked bags.”

Thanks for asking, Leon. Wireless tracking devices are allowed in both carry-on and checked bags.

We talked about AirTags on airplanes on this week’s episode, number 261.