Apple has released an update to its XProtect component of Mac OS X to block certain outdated versions of the Java browser plug-in. These older versions will no longer run in Safari or Mail after this automatic update is applied. 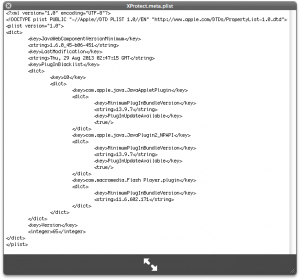 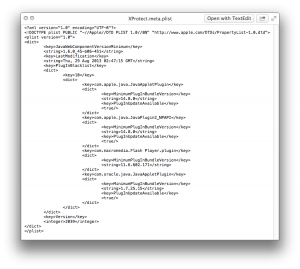 Apple likely changed the minimum Java plug-in version due to reports that a previously patched Java 6 vulnerability has been added to the Neutrino exploit kit, making it easier for evildoers to infect a Mac or PC running an outdated version of Java.

In a support article related to this update, Apple recommends only enabling the Java browser plug-in when you need it for a particular site, and then disabling the Java plug-in again afterward.

Meanwhile, Apple still has a very low minimum requirement for the Adobe Flash Player plug-in. Flash Player 11.6.602.171 was released in late February, and Apple began requiring it within a couple days of Adobe’s release due to reports of active, in-the-wild exploitation of vulnerabilities in older versions.

Apple’s XProtect system provides rudimentary protection against certain Mac threats. It does not offer live malware scanning, protection against Windows threats or phishing sites, or other protection that full-featured antivirus software can provide. Intego develops a number of specialized security products for Mac, available from www.intego.com