Today Apple introduced the latest models of the iPhone and Apple Watch at the Steve Jobs Theater on the new Apple campus. If you’ve been following the Mac news sites, you’ve seen much of what was announced; leaks made this event less surprising that it often is. This is an “s” year, when Apple iterates the latest model iPhone without any major new features. There are two new top-of-the-line iPhones and one inexpensive model, similar in many respects to the flagship iPhones Xs.

As for the Apple Watch, the update was more interesting. Some major new health-related features join new sizes for the device. A redesign of some of the watch faces means that you will have access to more information at a glance. A new gold stainless steel model adds a bit of class to the product line.

Last year’s new iPhone – the iPhone X – was a major change in the product’s form factor. It now comes in three variants; the iPhone Xs, the iPhone Xs Max, and the iPhone Xr. The first two models continue last year’s iPhone X lineage, while the Xr is a less expensive version. But don’t write it off; for a couple hundred dollars less, you get most of the features of the more expensive models.

Both of these models are stainless steel with glass backs and are available in silver, space gray, and a new gold color. Starting at 64 GB storage, both models offer options for 256 GB and 512 GB, an astonishing amount of storage in an iPhone. However, since more people stream music, it might be hard to fill up all that space. You’ll need to pay a lot for iCloud storage to back it up unless you still back up your iPhone to iTunes. 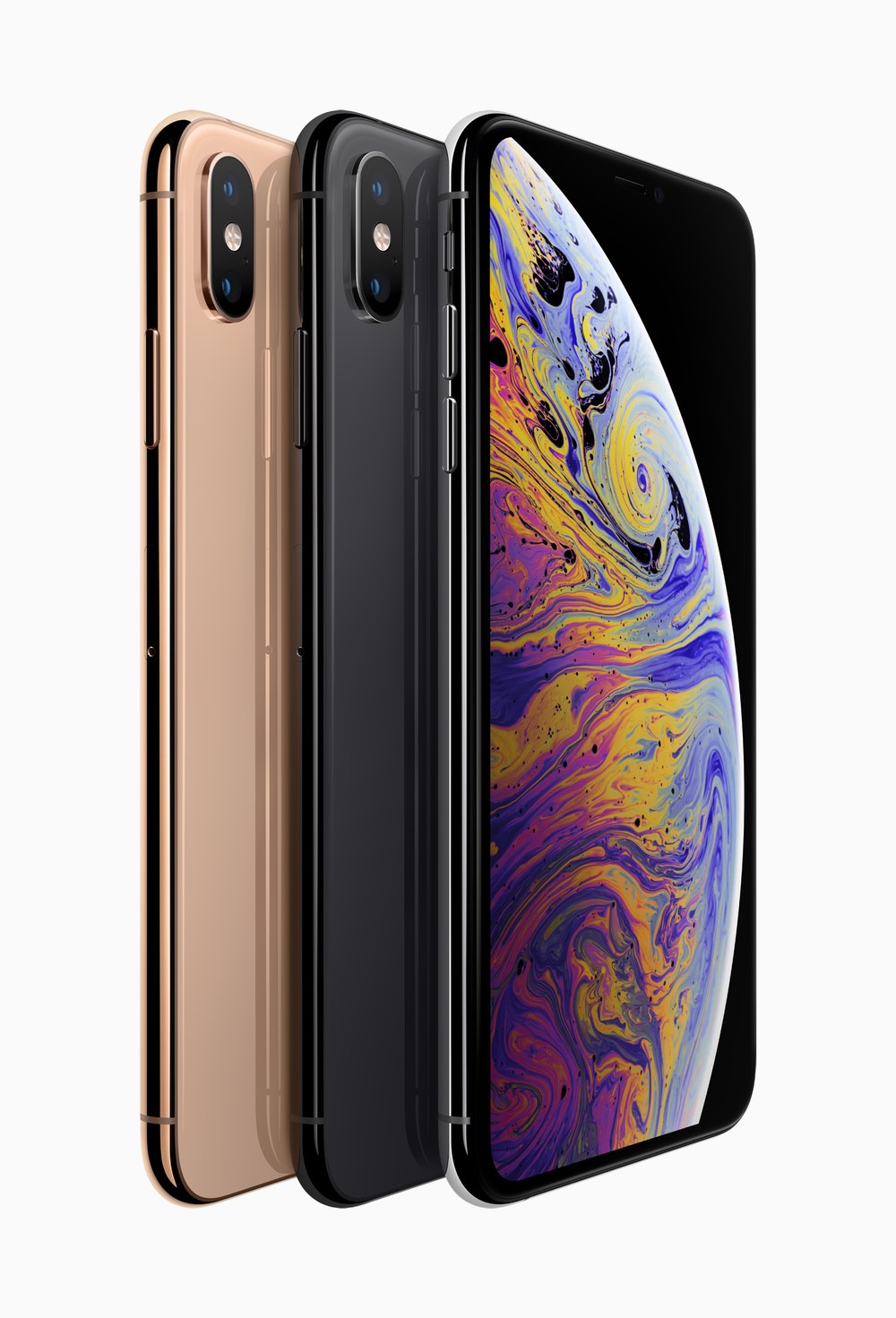 Apple highlighted the faster processors all around, but most users won’t see that much of a difference. There are some improvements to the camera, though mostly software-driven; the dual cameras are still 12 Mp. There is a neat new feature for working with the blurred background in portrait mode where you can adjust the amount of blur, and that’s even available on the cheaper, single-camera iPhone Xr.

Improvements have been made to water resistance – which Apple tested in a number of liquids including orange juice and beer – Face ID is still present and battery life is better on all models. Both phones offer dual-SIM capability: there’s one SIM slot, but a second eSIM option, assuming your carrier supports it.

The iPhone Xr is an interesting device. With most of the features of the higher-priced model with the notable exception of a single camera and an aluminum body, this is a great “budget” iPhone X. Available in six colors, pricing starts at $749. iPhone Xr orders start on October 19 with delivery from October 26.

Apple will still sell the iPhone 7 and 8 with their prices dropping to start at only $449 and $599. If you don’t need the latest iPhone, it’s a great time to buy last year’s model. But if you liked the smaller form factor of the iPhone of yore and were hoping for an iPhone SE2, that one didn’t see the light of day – the iPhone SE is now RIP.

One of the biggest changes to the Apple Watch Series 4 is its size. Increasing from 38mm and 42mm to 40mm and 44mm, and shrinking the bezels around the display, the Apple Watch has 32% and 35% more screen real estate. The new sizes aren’t radically different; they just add one millimeter on the top and bottom of the device and a bit less on each side. However, those with smaller wrists, notably women and teenagers, may find even the smaller model too large.

The corners of the display are now rounded, matching the case, making the Apple Watch look a bit more like a watch and less like a wrist computer. While the watches are larger, existing bands will still fit, which is good for those people who have invested in a collection of bands.

The larger size enables more complications, especially on the new Infograph watch face which can have up to eight of them. Some curl around the corners of the time circle, which, together with the rounded corners, almost suggest a round Apple Watch. 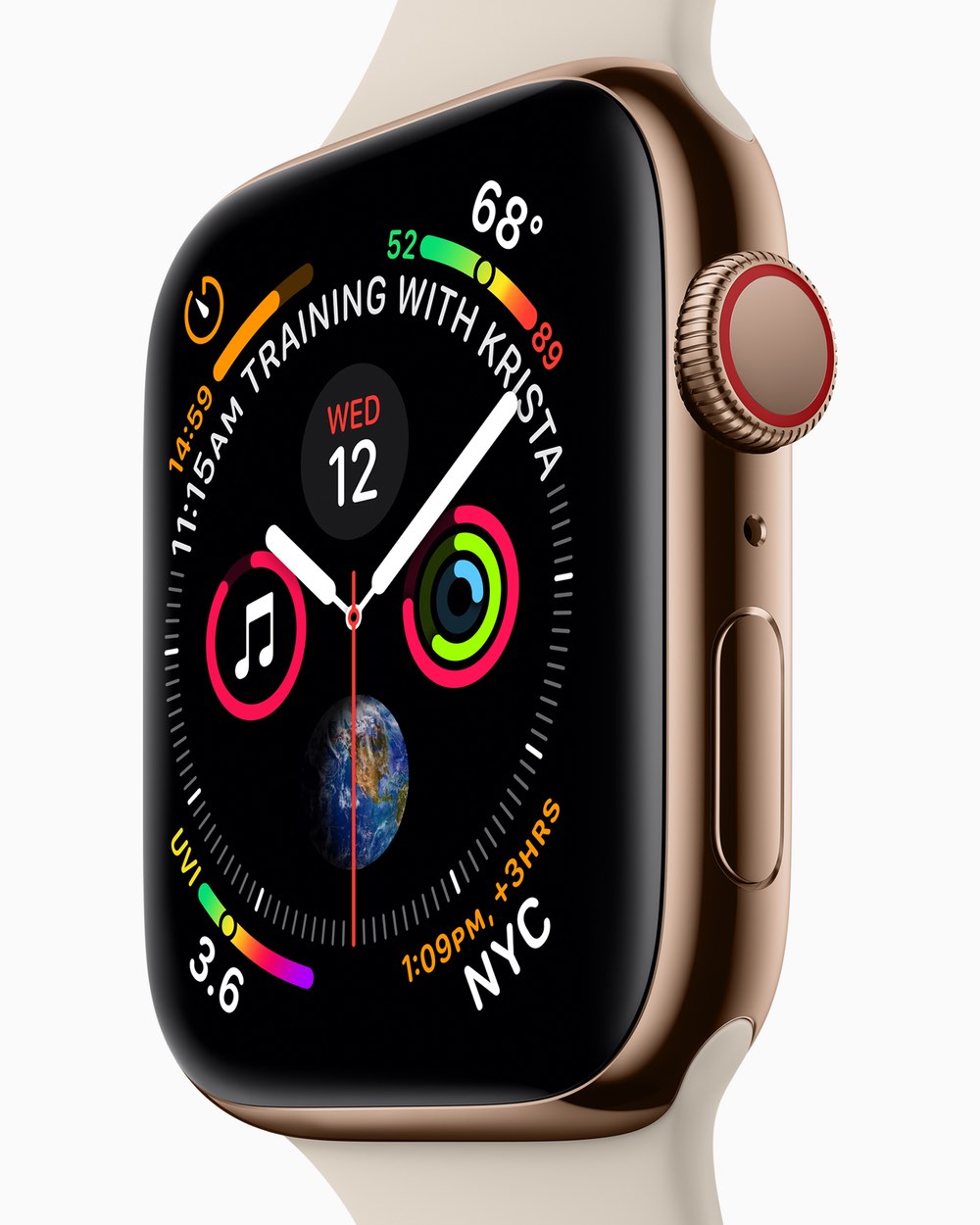 While workouts get a boost, the biggest new features are in the health area. A new heart sensor allows the Apple Watch to generate an electrocardiogram. FDA-approved in the US, this might be adopted by other countries. This will provide great data to pass on to your doctor; the ability to perform this at any time without expensive equipment in real-world situations can be a powerful diagnostic tool. The Apple Watch can also detect arrhythmias and a low heart rate, in addition to the current ability to alert you if your resting heart rate is too high.

There is also a new fall detection feature. If you fall, and you’re not responsive for one minute, the Apple Watch will automatically contact the emergency services. These two features suggest that Apple is targeting an older demographic for whom cardiac issues and falls can be serious. 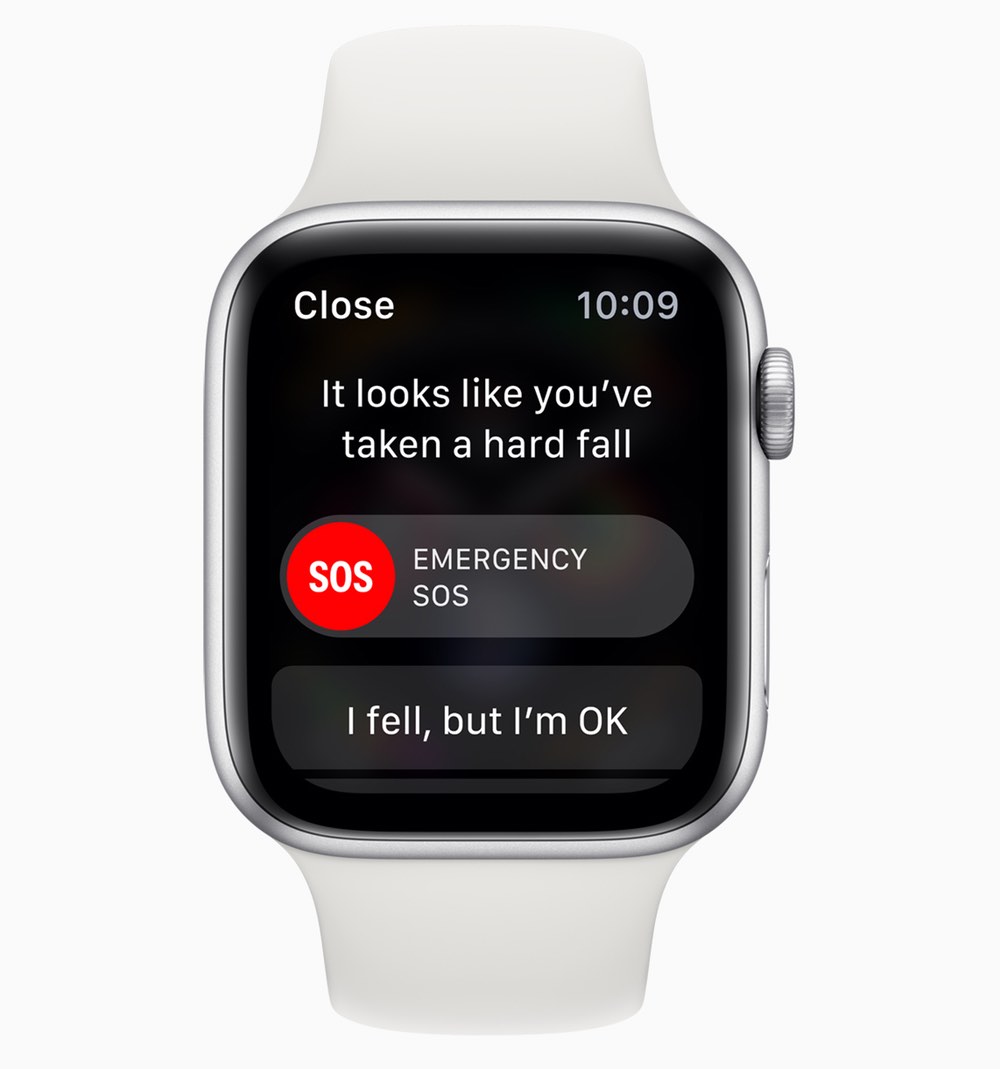 The Series 4 is faster and more efficient, as is generally the case for a new model, and is notably a bit thinner than the Series 3 (which added about 1 mm on the previous model). The display is much brighter; I’ve seen photos from people who got a hands on after the Apple event  comparing it to the Series 3, and reading it in the sun will be much easier.

Starting at $399 for the aluminum 40mm GPS only, or $429 for the 44mm model, the GPS + cellular Apple Watch costs an additional $100. Nike models are similarly priced. The stainless steel model, only available in GPS + cellular, costs $699 or $749, and features a new gold color together with silver and space gray. (There’s also a gold Milanese loop available.) The Apple Watch Edition has been discontinued. Initially in expensive gold, then in a ceramic version, it leaves only the Hermès models with fancy leather bands at the high end; they cost from $1249 to $1399.

All in all, as noted earlier, this is an “s” year, with incremental improvements. If you weren’t sold on the iPhone X last year, you may not see any need to upgrade this year. If you’re not convinced by the Apple Watch, this year’s model might not tempt you. But you can take advantage of lower prices on the iPhone 7 and 8, and on the Apple Watch Series 3 if your hardware is older and you still want something new. Last year’s models are fine and you’ll save a lot of money.