A few months ago we wrote about “Do Not Track,” a web browser setting that users can enable if they don’t want to be tracked while they surf the Internet. The FTC endorsed the tool in 2010, and shortly after that the major web browsers began offering the Do Not Track option to its users. Understandably, advertisers are very displeased with the feature, as it means less customers to track and try to sell to. With the upcoming release of IE 10, the discussion is getting even more heated. Now advertisers are claiming that Do Not Track will “kill the free Internet and destroy Windows Mobile,” especially as more companies shift from contextual ads (placing relevant ads on related websites) to retargeting (advertising a product a user may have looked at several days ago on a different website he or she happens to be on).

Adding fuel to the fire is Microsoft’s intent to launch Internet Explorer 10 with anti-tracking enabled by default. Considering companies spend billions of dollars a year advertising on Microsoft platforms, this announcement has advertisers pretty miffed at Microsoft. In fact, the Association of National Advertisers, which is comprised of large companies such as Walmart, McDonald’s, and Visa, recently penned a letter to Steve Ballmer opposing the default Do Not Track feature. The letter argues that because Internet Explorer has a 43% marketshare in the United States, turning off tracking for that many web users could seriously hurt the economic growth of the Internet. 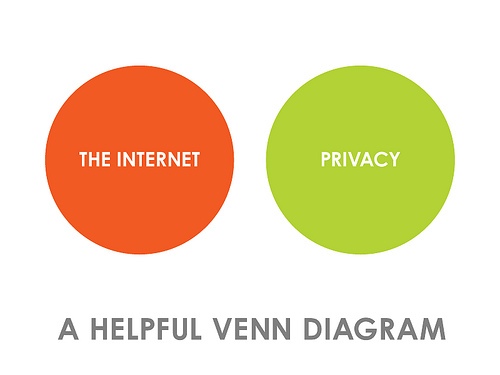 How advertisers want the Internet to be.

It’s a slippery slope for sure. Advertisers are arguing that Microsoft’s decision (and Do Not Track in general) is “the wrong choice” for consumers because they’re given less purchasing freedom, while users who value their privacy and don’t want to be aggressively targeted through ads are happy that they can surf the web a bit more under the radar. Dish Network is in a similar pickle–they’re facing lawsuits from broadcasters over its Hopper DVR that allows customers to automatically skip over commercials using the “AutoHop” feature. Fox made complaints similar to online advertisers’ gripes, saying the Hopper DVR’s commercial skipping functionality “will ultimately destroy the advertising-supported ecosystem.”

Lawmakers, meanwhile, are disappointed by the Digital Advertising Alliance’s recommendation to its members that they ignore Microsoft’s decision to have Do Not Track triggered by default in IE 10. They issued the following statement in response:

“Privacy is an issue that affects everyone, and the Digital Advertising Alliance’s announcement made clear that it puts profits over privacy.  If consumers want to be tracked online, they should have to opt-in to be tracked, instead of the other way around. This is why we are disappointed to hear the Digital Advertising Alliance insist that it will not honor Microsoft’s “Do Not Track” default and will not penalize companies that ignore it.

“While we appreciate the efforts industry has taken to develop a ‘Do Not Track’ signal, we have long endorsed a standard that allows consumers to affirmatively choose whether to permit collection of their personal information and targeting of advertisements. Until we have stronger privacy laws in place that mandate a company adhere to a consumer’s preference, especially for children and teens, consumers and their personal information will remain at risk.”

The issue at hand is that businesses at least want consumers to make a conscious decision to skip or ignore their advertisements. If it were up to them, I’m sure they’d take the choice away altogether. As it stands, however, giving us the choice to fast-forward a commercial, install Ad Blocker, or actively enable Do Not Track means that some of us may intentionally choose to disable or block advertisements while others will put up with them for various reasons (indifference, not knowing how to install Ad Blocker, etc). The Hopper automatically skips commercials and Internet Explorer 10 automatically has Do Not Track enabled, removing that choice and “robbing” advertisers of millions of people who may have otherwise not done anything.

What do you think will happen with Do Not Track? In this world money talks, so advertisers with deep pockets may very well be able to sway the situation back in their favor at the expense of user privacy. Do you think Microsoft will hold firm with IE 10, or will they cave to advertiser pressure and launch the new browser with Do Not Track disabled?