Things have been relatively quiet lately from the authors of the Tibet family of malware, but another variant was found last night on the Virus Total website, which is a site used by security researchers to share malware samples. Before last night, the last variant was found just over a year ago, and was already detected by Intego VirusBarrier’s existing virus definitions as OSX/Tibet.C.

This time, the attack arrives via a Java applet on a web site. This drops a Java archive with the backdoor and launches it without user interaction, by way of a Java vulnerability. When installed, it creates a backdoor to the affected computer, which allows an attacker to view and access files on the computer as well as running commands. The malware uses recently patched Java vulnerabilities CVE-2013-2465 and CVE-2013-2471. If you’ve not yet updated, now would be a great time to do so.

The archive file has the following contents: 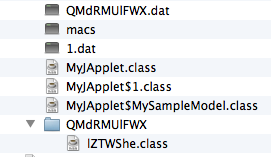 The LaunchAgent enables the malware to start after reboot. The backdoor itself is what’s copied as “AudioService.” It contacts a C&C server in China (mail.tbnewspaper.com) to receive commands.

Intego VirusBarrier with current malware definitions protects Mac users against this malware as OSX/Tibet.D. This is considered to be a low-risk threat at this time as it’s not known to be affecting users.