There has been a lot of talk about how Microsoft’s market share has changed lately, especially since the introduction of the iPhone and the Android operating system. One recent article gives a rather dramatic graph of market share since 1975: 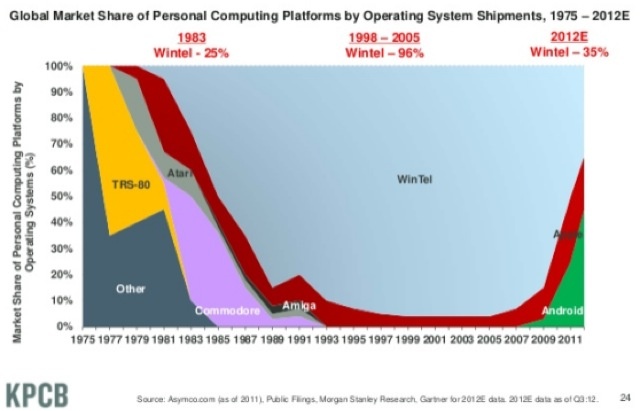 You can see how the Windows operating systems completely decimated most of its competitors as computers became common at work and at home. Apple managed to maintain a relatively steady percentage since its beginning, never straying much from its hold on that small corner of the market. But with the introduction of the iPhone and the iOS operating system, people became comfortable with the idea of carrying computing devices around in their pocket. Once they became familiar with Apple’s style of OS, more people were willing to give OS X a try. This slow but steady increase grew even faster with the introduction of the iPad. The release of Android further exploded Windows’ hold on the market, and it’s now taking a huge chunk of Microsoft’s lunch too.

But this shouldn’t be schadenfreude at Microsoft’s expense. How many people out there switched to these alternate operating systems to get out of the way of the tsunami of malware that continues to pound Windows systems daily, in an effort to buy some time from having to adopt good security habits that can sometimes seem like an unnecessary pain in the neck? And how many relaxed their security habits when they weren’t constantly being bombarded with warnings of malware doom? Malware authors are well aware of these reactions and habits, making those users a particularly tasty target.

2012 has seen a huge increase in attacks on both Android and OS X as malware authors see the Windows market begin to dry up. These threat increases will naturally keep snowballing as Windows percentage continues to shrink, so you might want to start educating yourself now on good security hygiene for every operating system that holds your sensitive data. That way, you won’t be scrambling to shore up your defenses the next time some major malware warning comes your way.