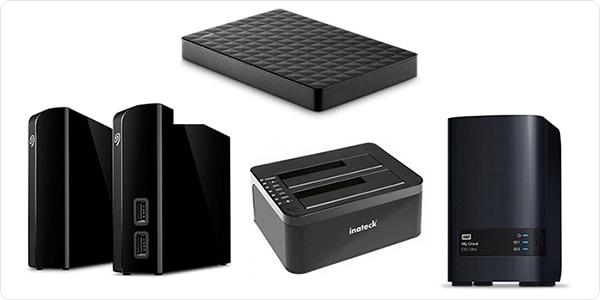 Backups are a lot like insurance: it’s imperative to have it, and you hope you never have to use it. Likewise, if you need to use a backup hard drive to restore your data, it can save you a great deal of time, money, and headaches. We often remind you how important it is to back up your files, but it’s not just the backup that matters. The media you use to store your data is critical!

There are different types of backup hard drives available for Mac. You can use external hard drives connected to your Mac, portable hard drives that you connect when needed, or network devices. You have lots of choice, but each of these devices works best in specific situations. So how can you tell which type of hard drive is best for you?

Choosing a hard drive to back up your data can be a quest in and of itself. This post highlights the different types of hard drives for Mac that you can use, and how to choose the best backup hardware for your needs. 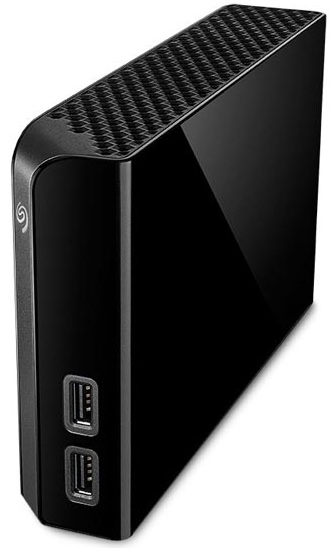 The standard way to back up a Mac is to use a hard disk connected via USB or Thunderbolt. There are all kinds of external hard drives, from a number of brands. You can currently get a 4 TB hard drive for less than $100, and external drives are now available in sizes up to 16 TB.

Thunderbolt drives are on the more expensive end; in fact, they are priced at more than twice the average cost. Yet there’s no real advantage to Thunderbolt as a backup drive. While the transfer speed can be higher than USB 3, it’s only really useful if you’re working on files on that drive, such as editing video.

You use an external hard drive for backups with an apps like Intego Personal Backup or Apple’s Time Machine, but you can’t use the same drive for both. So if you want belt-and-suspenders protection, it’s a good idea to get one drive for each. Also, check how much data you have to back up, and buy a drive that has at least twice that amount of storage.

Time Machine saves older files, so your first backup will copy all your data, and subsequent backups copy new and changed files. You can make a similar type of backup with Intego Personal Backup, storing multiple copies of files, and even create bootable clones on an external hard drive for system failure insurance. Just be sure to take into account that you will create a lot more data over the life of the hard drive from the time you purchase it.

How long do hard drives last? I’ve had drives crash on me, but not for many years. I used to assume that hard drives could last about three years before they start developing problems, but newer drives seem much more reliable. I’ve been using a couple of 8 TB Seagate Backup Plus Hub drives for more than three years now, and there’s no sign that they might fail. (Of course, you should have redundant backups, just in case.)

Seagate hard drives are very quiet, and each one is also a USB 3 hub, with two ports on the front that you can use to connect another device or to charge your iOS devices. It’s safe to assume that good drives will last about five years, but I don’t recommended that you use them much longer than that; the risk of failure increases over time, and backup hard drives are too important to fail when you need them most. 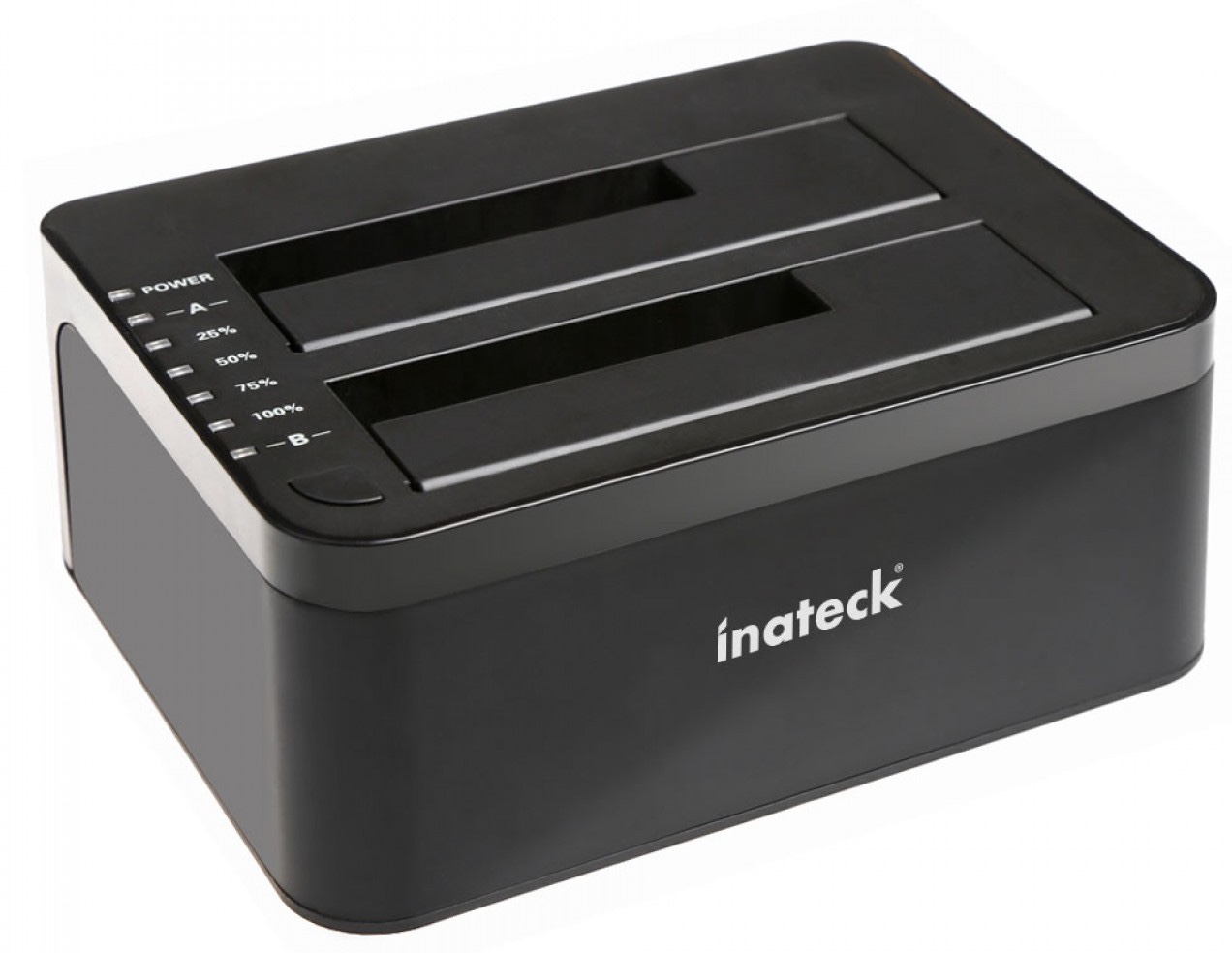 All the drives mentioned in this article have enclosures, meaning they are contained in a device that has the connectors you need to use them. However, there’s another solution: You can use a disk dock to house an internal hard drive. For example, this inexpensive Inatek disk dock has two bays, and lets you insert any naked hard drive in it.

The advantage is clear: Internal hard drives are a bit cheaper than those in enclosures. You can rotate several drives easily, with just one cable connected to your Mac, but you can’t automate this process, as you can with external drives. Sure, you could leave two drives in the dock, but it’s more efficient to use external drives if you want always-on backups. A hard drive docking station is a great device if you want to use a number of backup drives to store off-site.

There’s one more reason to own a drive dock. If one of your external drives’ enclosures fails, you can remove the drive and access it in the dock. This dock can handle both standard 3.5" drives and smaller 2.5" drives, and can even copy one disk to another without needing a computer. 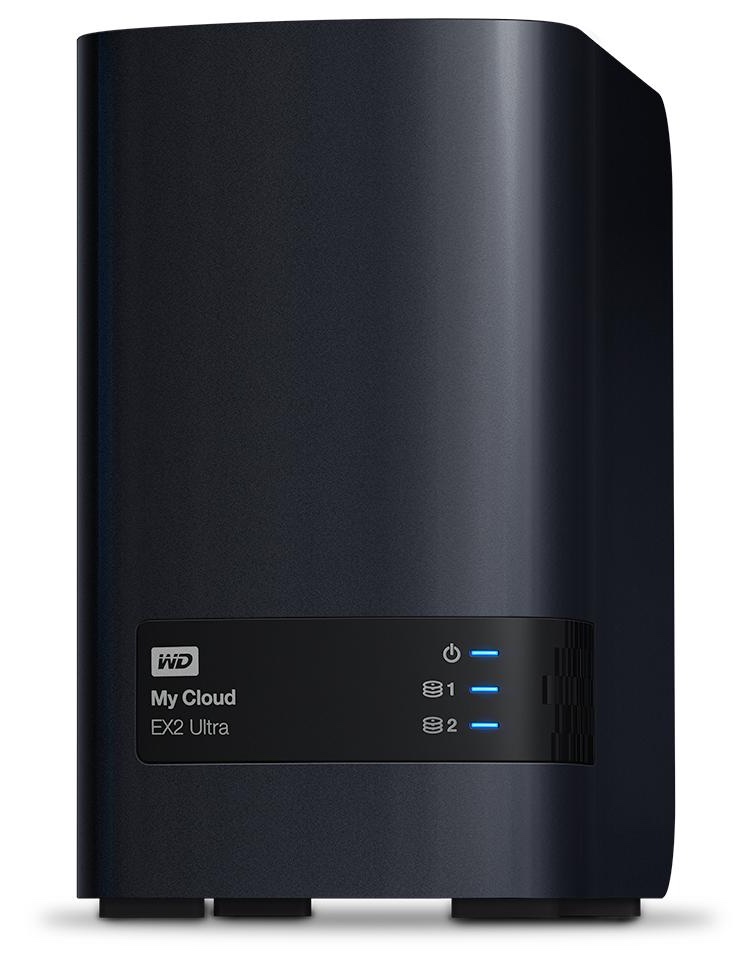 Another type of backup hard drive you can use is a network drive, or NAS (network attached storage device). This is a hard drive in a special enclosure that houses a full operating system, generally a stripped-down version of Linux. For example, I use a Synology NAS, which holds two drives, for backups, as well as for some file sharing in my home office.

When is this practical? If you have a laptop, and want to back it up without connecting anything, you can easily set up a NAS to take backups from both Intego Personal Backup and from Time Machine. Most NAS devices these days have user-friendly management, and configuration is simple. The WD device has a Mac app that lets users manage files, and most settings are managed in a web browser.

Even if you don’t have a laptop, you might want to use a NAS to back up your Mac. It keeps your desk clutter free, and the device can be located anywhere in your home or office that is near a router or hub. And you can use it to store other files that you may want to share among your co-workers or family. 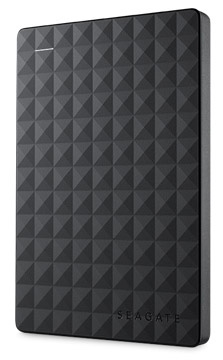 You may not want to have a hard drive permanently connected to your Mac. This is most likely the case if you have a laptop computer.

In this case, you can get 4 TB self-powered portable hard drives for less than $100. For example, I have several Seagate Expansion 4 TB drives that I use for off-site backups. Other trusted portable storage options include LaCie Rugged drives.

These portable hard drives use USB 3, and are fairly fast, but they’re also compact. Additionally, the fact that you don’t need a power supply—they get power from the computer—makes them easy to use.

You could use portable hard drives with a desktop Mac, too. They’re usually not as fast as a good desktop drive, but for backups, you don’t need much speed. With portable drives, durability is your best friend, and keeping your data safe from water, dust and drops is critical.

Portable SSDs have become cheap enough to consider as backup drives, though you won’t get the same amount of storage for your money. A 500 GB portable SSD is about $100, and most of these devices max out at 2 TB, with prices around $200 to $300, or more, depending on the speed of the drives. However, a portable SSD is a great way to back up your laptop when you’re on the go: they’re small and light, and have no moving parts, so they are more reliable than spinning hard drives. I’ve got portable SSDs from SanDisk and Samsung, and both are fast and reliable.

You shouldn’t just use any old hard drive you have laying around for your backups; instead, you want to make sure that if you need to restore some of your files you have no problems. Hard disks eventually fail, and using hard disks more than a few years increases the risk of data loss. So if you have old hard drives, you should think of replacing them.

Furthermore, don’t just buy one backup hard drive. If you really care about your data, you should back it up at least twice. Imagine your computer gets lost or stolen, or its drive crashes, and you find that your backup is unreadable… Having a second drive isn’t too expensive these days, and it adds an extra layer of protection.

You can combine the above types of hard drives, too; for example, use a desktop drive for your iMac, and also have a NAS for a second backup, or use portable drives to have a second, off-site backup. Just in case. Because just like insurance, if and when you need it, you will never regret having it.