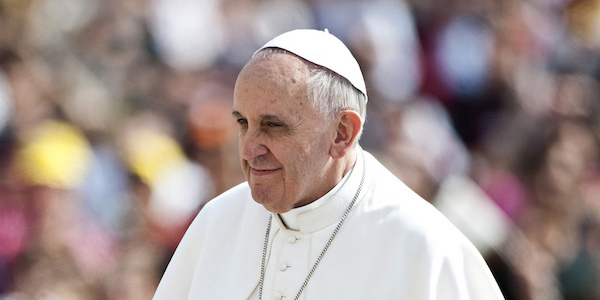 There’s something to be said about the benefits of sharing a good meal, sharing affections, stories, and events at the dinner table, and how technology is causing interruptions with families these days — how smartphones are a huge interruption. On Wednesday, Pope Francis offered his take on how to restore quality family dinnertime.

Pope Francis zeroed in on this issue during his weekly catechesis in St. Peter’s Square, discussing one of the most important characteristics of family life: togetherness. During the Pope’s catechesis, he advised parents to remove smartphones from the dinner table, as a means to recover a sense of relationship within a family.

“When there’s no togetherness, there is selfishness; everyone thinks about himself,” the Pope said, urging parents to recover family togetherness while adapting it to the times.

For families around the world, too much screen time is quickly becoming a hot button issue — even celebrities have spoken out about the challenges of too much screen time. Children are using smartphones and tablets at a younger and younger age, and as a result, mobile technology is causing families to become less involved with each other.

Pope Francis reflected on this harsh reality — that spending time on your smartphone makes you less present, less open, and can lead to a more divided family — and used his catechesis to help all families understand that restoring family togetherness begins at the dinner table.

Following is a snippet from the Pope’s catechesis:

Today we reflect on a characteristic of family life that we learn from the first years of life: togetherness. Sharing and being able to share is a precious virtue. Its symbol, its “icon,” is the family gathered around the dinner table. The sharing of a meal—and beyond the food, sharing affections, stories and events—is a fundamental experience. […]
Togetherness is a sure thermometer for measuring the health of relationships: if something isn’t going well in a family, or if there’s some hidden wound, it’s immediately clear at the table. A family that almost never eats together, or that, rather than talking at table watches television or looks at the smartphone, is “not much of a family.” When the children are attached to the computer and the telephone at the table, and don’t listen to one another, this isn’t family, it’s a hostel! […]
Today, many social contexts pose obstacles to family togetherness. It’s true, today it’s not easy. We must find a way to recover it. At the table we talk, at the table we listen. No more silence, that silence that isn’t the silence of nuns, but the silence of selfishness, where everyone does his own thing, or is on the television or computer … and they don’t talk. No, no silence. We need to recover family togetherness while adapting it to the times.

Pope Francis offered his advice to all families around the world, and his message could be resonating with people. He truly believes limiting screen time can save your family life and your children’s ability to relate. What do you think — is he onto something or full of hot air? Is device-free dinnertime the answer to help restore family togetherness?