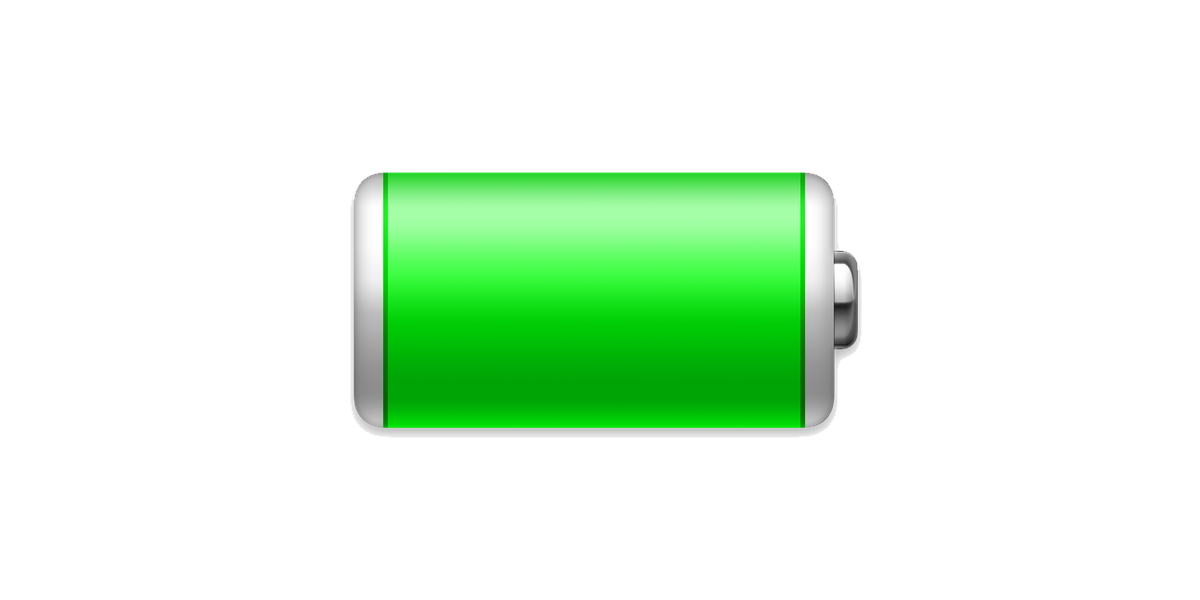 If there’s one thing we need to use our mobile devices and computers it’s power. Without it, these devices are just bricks. Managing power on mobile and portable devices has long been a balancing act between performance and comfort. You don’t want to cripple your devices by turning off too many useful features, but, depending on how you use your mobile devices, you may need to stretch the battery life as long as possible.

In this article, I’m going to tell you how batteries work on Apple devices, how long they last, how to optimize your battery use, when to use low power mode, and when to get a new battery for your iPhone, iPad, or Mac.

Today’s mobile devices today use lithium-ion batteries, which are efficient, long lasting batteries. Over the years, their capacity has have improved, as has their charging speed. On a new iPhone, with the appropriate power adapter, you can charge the device to 50% in 30 minutes.

These batteries are also easy to use. If you’ve been using portable devices for a long time, you may recall that you needed to fully charge, then fully deplete, a new battery, to calibrate it. After that, it was recommended to allow the batteries to fully deplete rather than charge them when they were partially depleted because of the memory effect in nickel-cadmium and nickel-metal hydride batteries. These batteries would lose their maximum capacity if they were repeatedly recharged after being partially depleted.

With lithium-ion batteries, and with new charging algorithms on devices, you don’t have to worry about any of this.

No battery lasts forever. Batteries in mobile devices are rated for a specific cycle count. For example, a new iPhone battery should last long enough to hold at least 80% of its original capacity after 500 charge cycles. A charge cycle is using the battery’s entire capacity: this could be using 100% of it in one day, or 50% each day for two days. It doesn’t matter if you’ve charged the battery; the cycle count is about the actual usage. This Apple battery web page gives a good example of this:

Different devices have different ratings: new iPads, Apple Watches, and Apple laptops are designed to survive for 1,000 cycles at that 80% milestone, and iPod touches can live for 400 cycles. The difference is due to the size of the batteries, and the amount of power they use. (It’s worth noting the progress made in battery technology, which you can see on this Apple web page listing maximum cycle counts for various Apple laptop models. Go back to before around 2010, and these devices’ batteries only lasted for 300 or 500 cycles.)

You can find the cycle count of your devices’ batteries in various ways. On a Mac laptop, it’s easy: open the System Information app, click Power in the sidebar, then look at the cycle count. In the screenshot below, on a new MacBook Air, it’s 13. 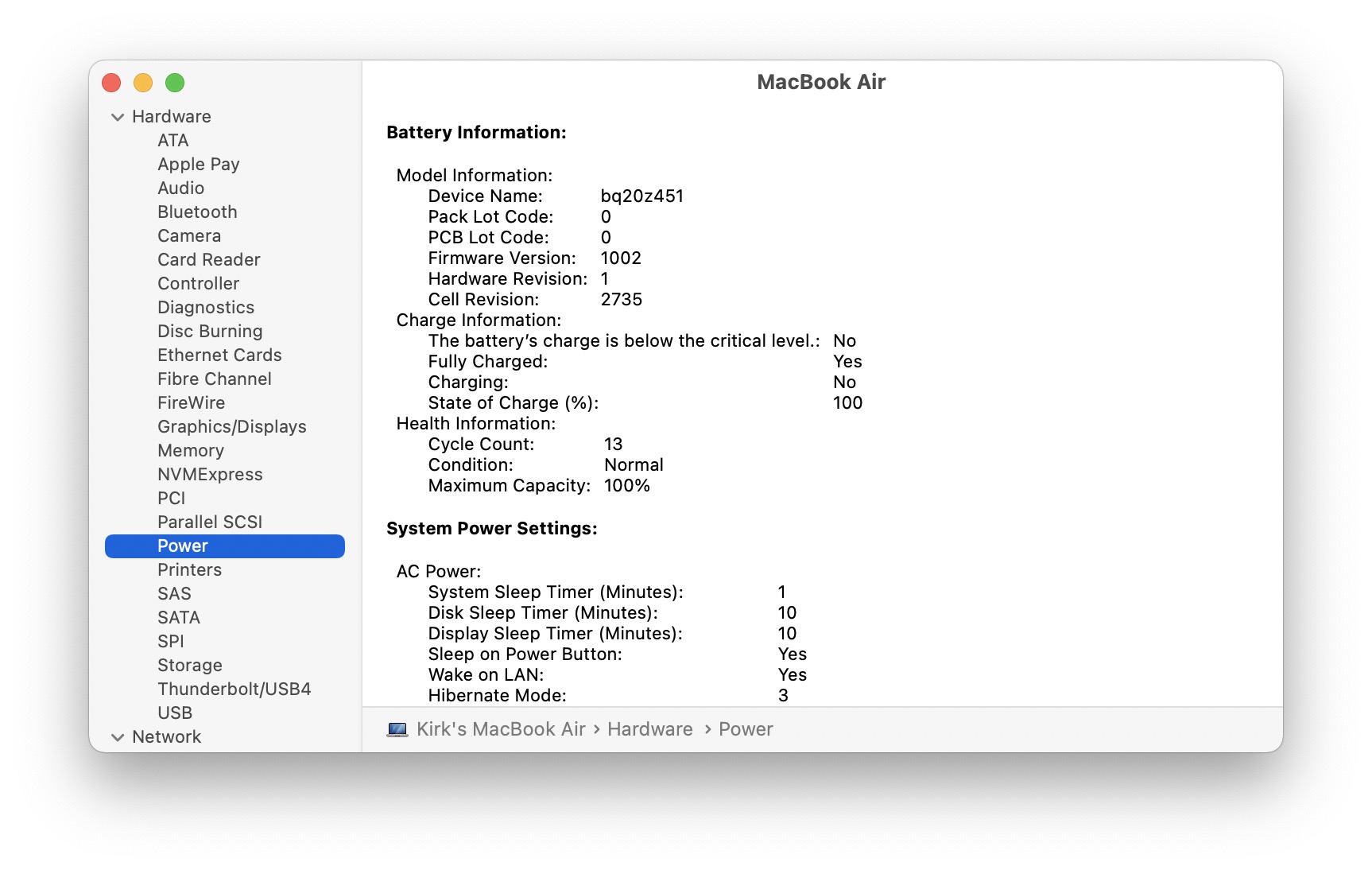 On mobile devices, it’s a bit more complicated. The easiest way is to use an app such as coconutBattery, which can display this information for devices connected via USB (or wi-fi, if you buy the pro version of the app). 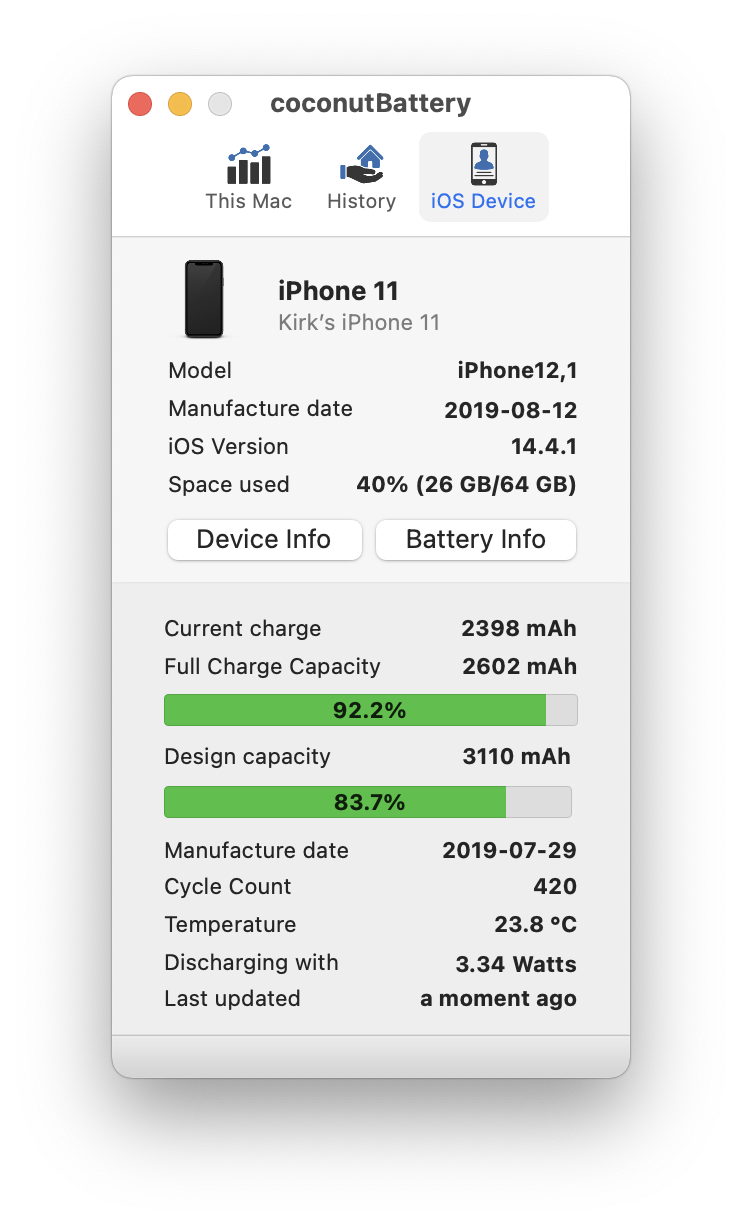 Another option is iMazing, which, in addition to its many features that allow you to back up and sync iOS devices, provides a battery info panel: 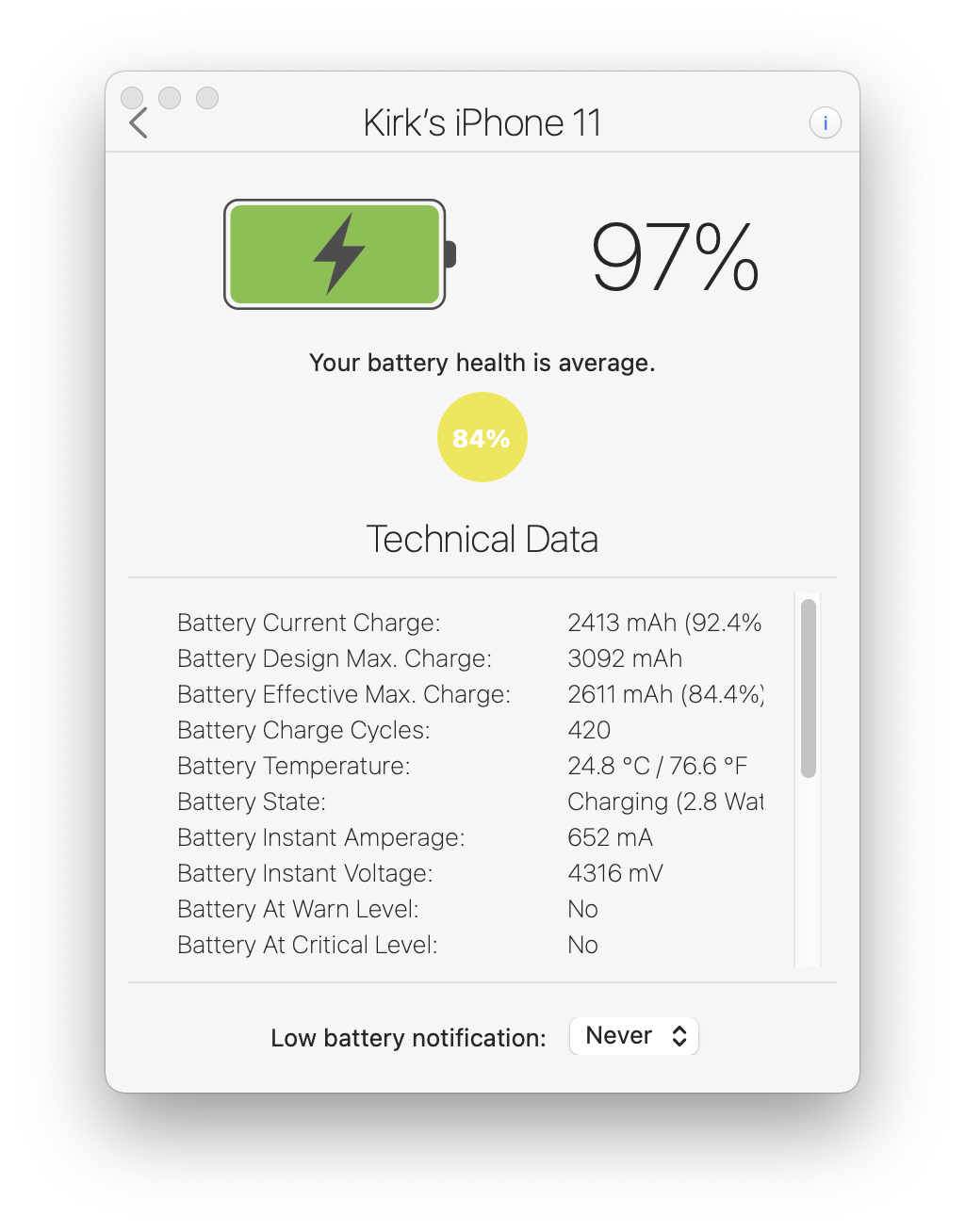 iOS devices give you useful battery information. Go to Settings > Battery to see your device’s battery level and battery health, but also which apps are using the most power.

Battery health is the important number to check. As I mentioned above, the key milestone in battery life is 80% of its original capacity. If you tap Battery Health – available on the iPhone, but not the iPad for some reason – you’ll see the maximum capacity: 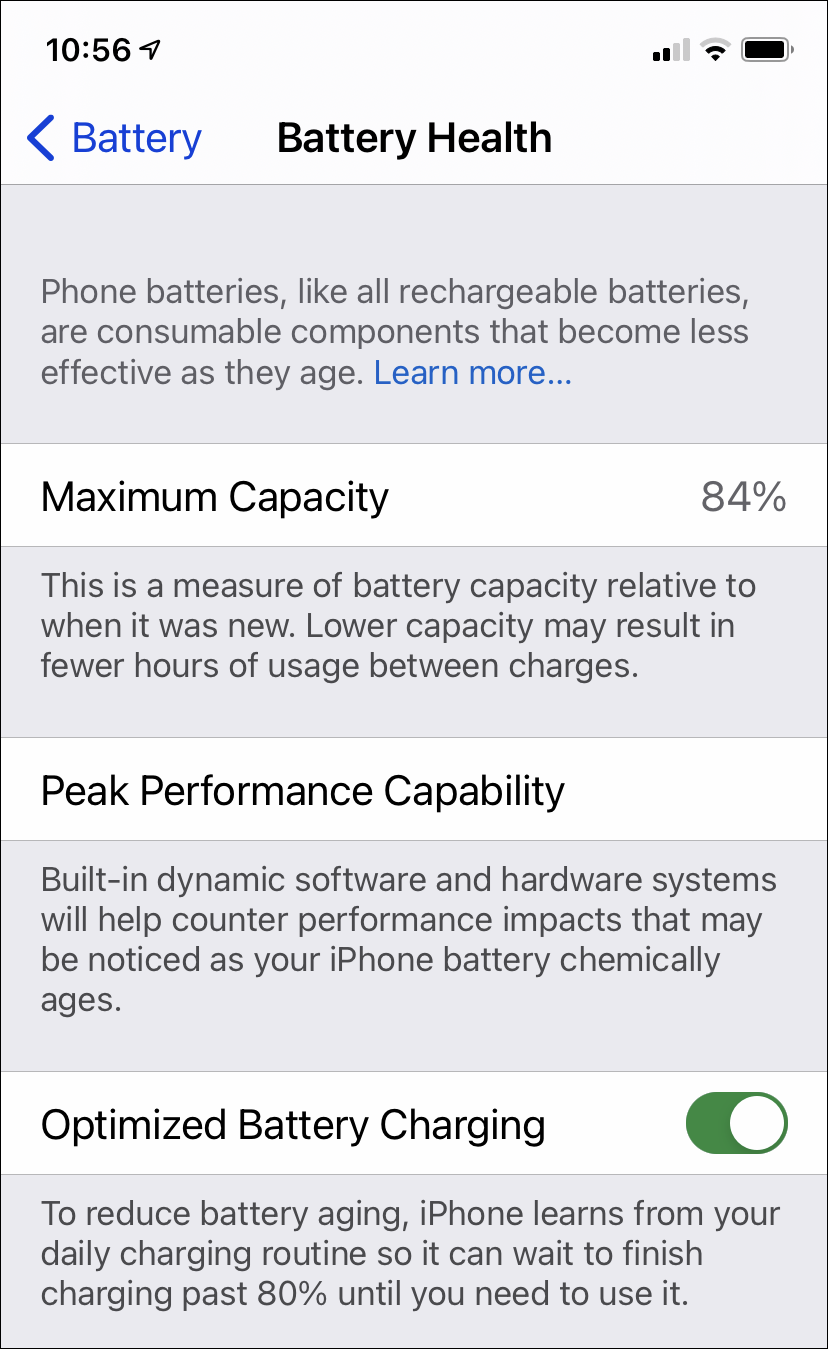 You’ll also notice a toggle at the bottom of this screen, which is an important one to set: Optimized Battery Charging. As it explains, your iPhone learns from your daily charging routine so it doesn’t try to fully charge the battery too often. iPhone batteries charge faster to 80%, then trickle charge after that, to ensure longer battery life. (This option isn’t available on the iPad.)

On the main Battery screen in Settings, you see a graph of your battery usage: you see the battery level over the last 24 hours, when the battery charges, and how long the devices was used, with screen on or screen off. You can also see an overview of the last 10 days. 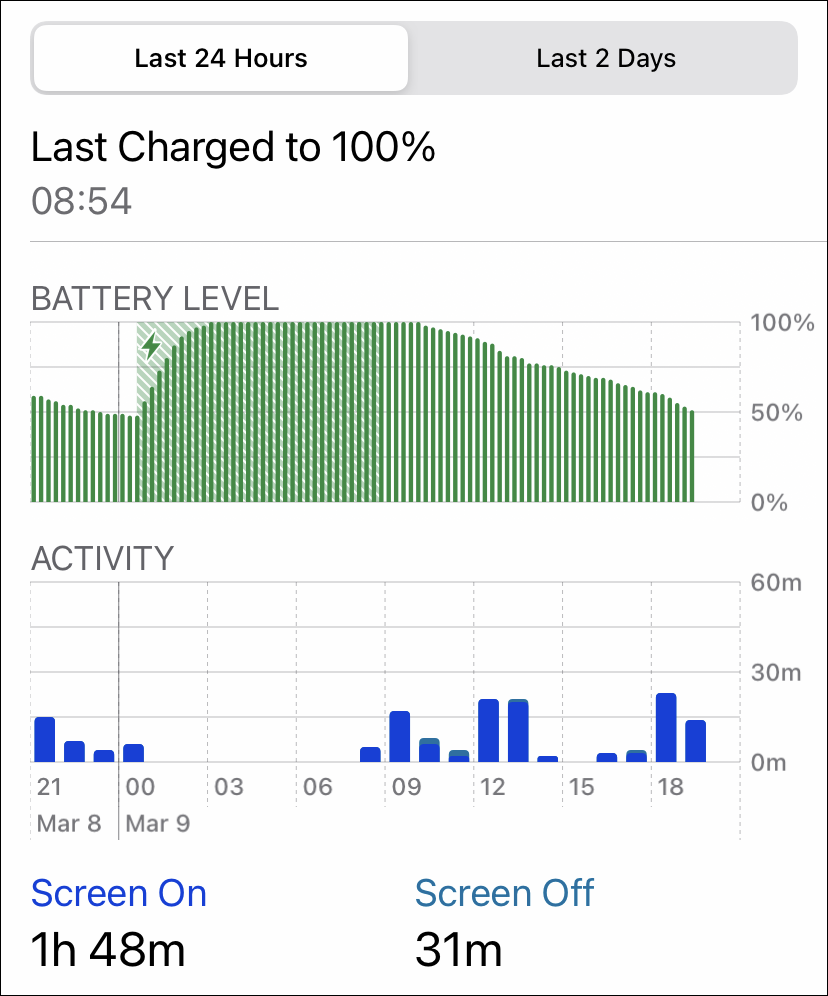 But you may also find other battery hogs here. Some people see very high battery usage on iPhones for covid exposure notifications. In some cases, this shows up in the list of apps using the battery, and in others it doesn’t. So if you don’t nee exposure notifications, make sure it’s turned off: go to Settings > Exposure Notifications to adjust this.

Here are some other ways to optimize battery life on iOS devices:

If you need more power

If you need more power than what your device can provide between charges, you have a couple of options. You can always charge your device in a car, if it has a USB port; keep the appropriate cable in the glove compartment.

Apple, and other companies, sell battery cases for iPhones: these provide an additional battery pack built into a case.

Or you can just buy a power bank: these portable battery packs have enough power to charge your device several times, and their USB ports let you charge different devices, in some cases more than one at a time. If you’re on the road a lot, this is probably the best option, but don’t leave it in your car if it’s going to get hot, because you could damage its battery.

To optimize battery life on a MacBook Air or MacBook Pro, follow the basic tips I mentioned for iOS devices. But Macs are very different from mobile devices. In general, apps don’t run in the background; if you want an app to not use power, just quit it.

If you go to System Preferences > Battery, you can adjust some power options on a Mac. On the main screen, you’ll see a power graph, along with screen on usage, but you won’t see this broken down by app. 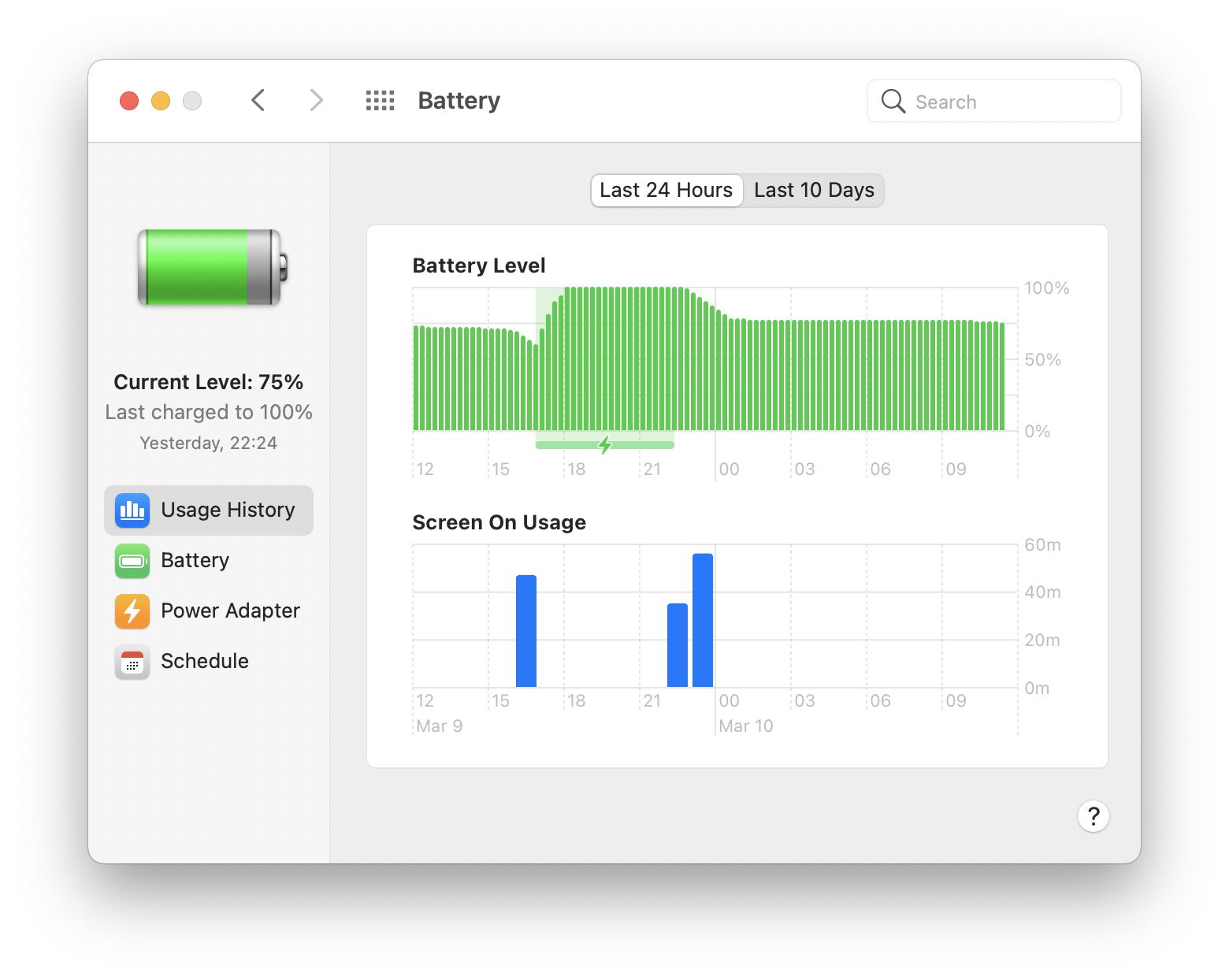 Click Battery in the sidebar to adjust some settings. You can set the display to turn off when it’s inactive; you can slightly dim the display when your Mac is on battery power; you can optimize video streaming when on battery (this plays HDR content in SDR; only available on recent Macs); and you can enable optimized battery charging, which works like it does on the iPhone. 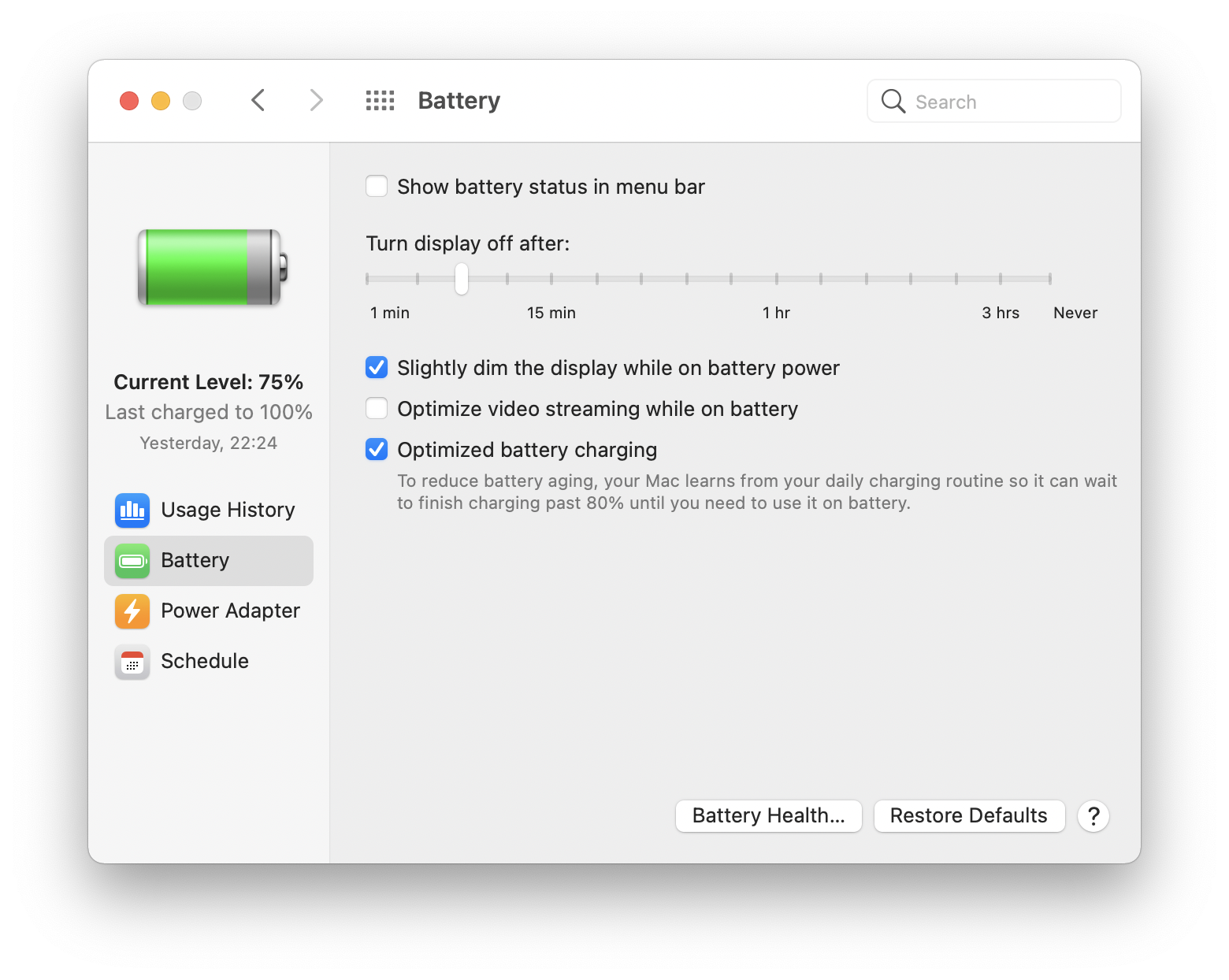 If you have a new M1 Mac, click Battery Health to see the maximum capacity of your battery, and it’s condition. This will tell you if it needs service.

Batteries are consumables, and will eventually need replacing. Apple guarantees batteries under warranty to the cycle counts I mentioned at the beginning of this article, so if your battery dies, and your device is covered by Apple Care, you’ll get a free replacement.

If not, it’s still a good idea to replace the battery on a device you want to keep using. Apple’s Battery Service and Recycling page will guide you in this. For example, you’ll pay $49 or $69 for an out-of-warranty battery replacement on an iPhone, and from $129 to $199 to replace a battery on a laptop. You can, of course, have third-party repair companies replace batteries, or even do it yourself, if you want to take the risk that the device might not work correctly.