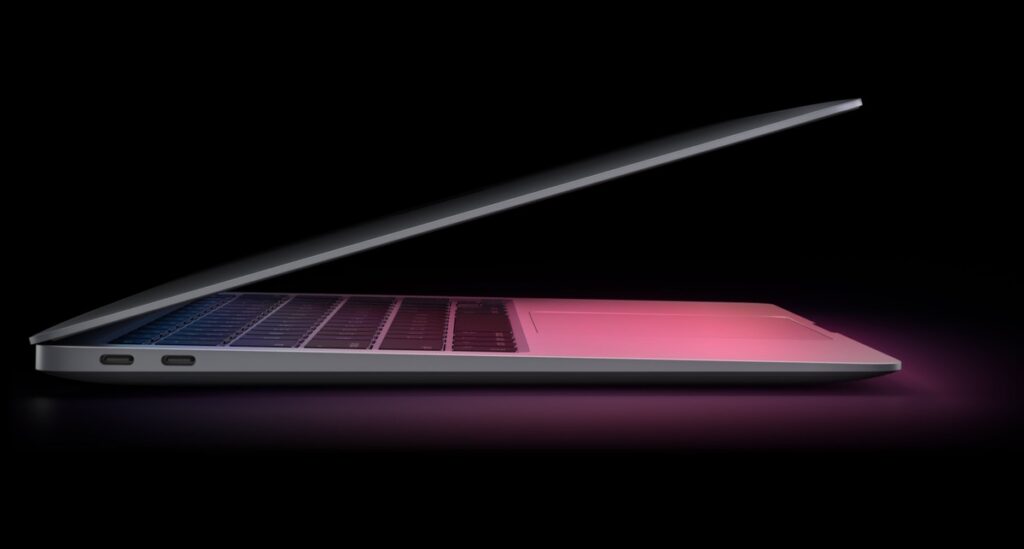 Apple’s new M1 Macs – the first Macs with Apple’s own chips in them – have started shipping, and users are finding that the company’s claims of speed and battery life were not exaggerated. Benchmarks have shown that single-core performance – which is the majority of what computers do – outstrips every available Mac, and multi-core performance is behind only the three fastest Mac models. Single-core performance using Rosetta emulation (which allows you to use apps compiled for Intel processors, not for the new Apple chips) also beats all Intel Macs. (If you want some technical details on why this system on a chip is so fast, read this article.)

But it’s not just about the speed; in most cases, we don’t need speed. Most of our computing involves using trivial tasks, such as browsing the web, writing and reading emails, and other non-processor intensive operations.

Battery life also outperforms other Apple laptops by up to 25%, meaning that the new MacBook Air and MacBook Pro really have all-day battery life.

Specs and benchmarks aren’t everything. What is most important is real-world usage. Here’s an overview of my first week with a new MacBook Air.

No change to the package

While the innards of these new Macs are revolutionary, there’s no change to their bodies. The Mac mini is the same, and the two laptop models are almost the same, with a few tweaks. The MacBook Air now has no fan, and has a Touch ID button; the MacBook Pro is a bit thicker and heavier. And both laptops have Apple’s redesigned scissor keyboards. If you had a recent Mac laptop, and suffered with keyboard issues, you should be free of issues with these new models. Note that this is a "backlit magic keyboard," but the backlighting is not adjustable. 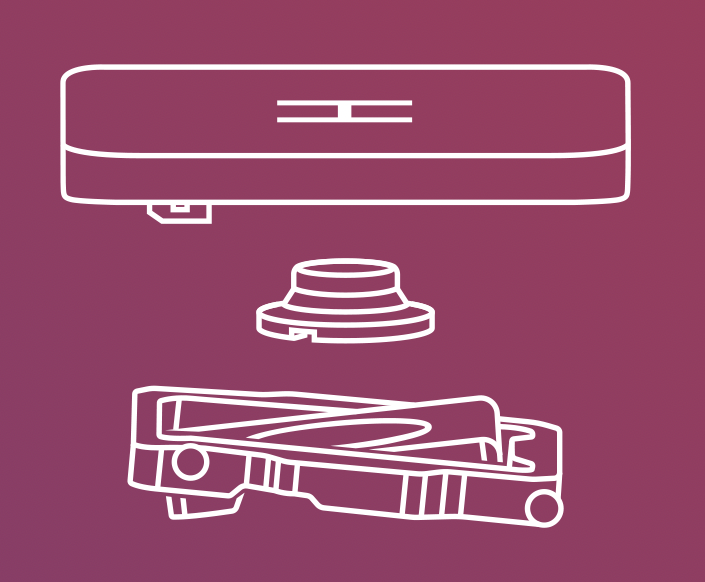 The one limitation that some are highlighting is that these two new laptops can only hold a maximum of 16 GB RAM. But the new architecture manages RAM differently from in the past, and you may not need more. In fact, I decided to buy a model with only 8 GB.

May main Mac is an iMac, and I use a laptop as a secondary Mac for testing, for occasional use away from my desk, and as a backup in case I have problems with my iMac. My last laptop was a 13-inch MacBook Pro with 16 GB RAM, bought about a year and a half ago, and these new Macs tempted me to replace it earlier than I normally would.

I opted to go for the absolute cheapest model: the $999 MacBook Air with 8 GB RAM. I wanted to save the $200 Apple tax for overpriced additional RAM, and I didn’t need more than the basic 256 GB storage. This cost a bit more than half the cost of my existing MacBook Pro.

A lot of people are pleased that the MacBook Air has no fan. I had thought that the MacBook Air never had a fan – I had the original 2008 model, and one a few years later – because I rarely heard it. Same with my latest MacBook Pro; the fan would only come on if I was using Skype for video calls. But some people – including my co-host of the Intego Mac Podcast, Josh Long – suffer from frequent fan noise, and would love to have a silent Mac.

My tasks on the MacBook Air

Over the week I’ve had this Mac, I’ve written articles, edited a podcast in Logic Pro, done some photo editing, and streamed some videos; pretty much my standard Mac usage.

I didn’t want to perform my own benchmarks, because artificial measurements don’t really tell how a computer works in the real world. But I did want to try out some tasks that would show off the speed of this new Mac. One such processor-intensive task I tried was using Pixelmator Pro’s ML Super Resolution feature: this upscales images using machine learning, so they don’t look upscaled.

I took a 57.5 MB raw file, about 5500px wide, and downscaled it to 1000px. I then launched the feature on both Macs simultaneously to upscale the image to 3000px. When the MacBook Air was finished, the iMac (a 3.6 GHz Quad-Core Intel Core i7 with 16 GB RAM) was only at 38%. In fact, it happens so quickly on the MacBook Air, that getting the screenshot below, showing progress, was difficult. 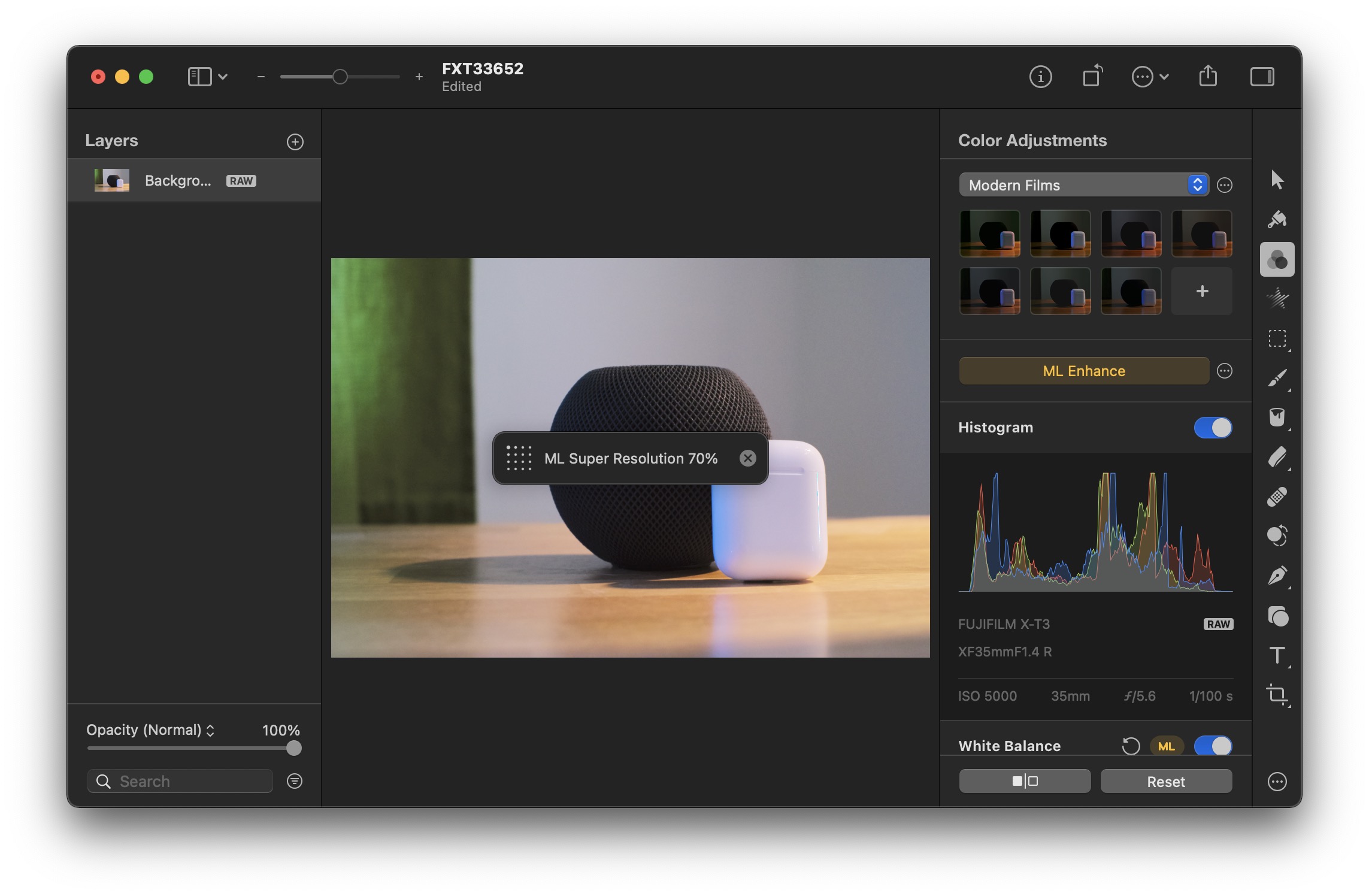 Another task I tried was decompressing a 2GB zip archive. It’s not just the processor speed that counts here, but also the read/write speed of the SSD. It took just under 14 seconds on the iMac; the MacBook Air performed the same operation in just over 9 seconds.

Finally, I wanted to see how far I could push this Mac. opened 78 tabs in Safari; that’s all the websites I have in my favorites. (This is something I would never do in real life; normally, I have no more than a dozen tabs open.) I expected the MacBook Air to grind to a beachballing halt, but it just kept going, not even breaking a sweat. As I switched from tab to tab, Safari was only using a few percent of the Mac’s CPU as it loaded each page. As I hovered my cursor over the tabs to view thumbnails, they all displayed quickly. 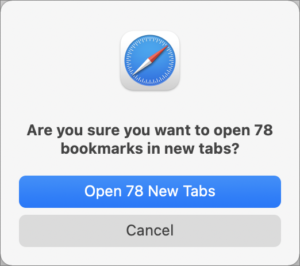 When they had all loaded, Safari was using about 11 GB RAM, with 7 GB virtual memory; interestingly, it showed about 2.5 GB free RAM. That means that the memory management was such that I could easily open more apps without any problems. So I did.

I opened a couple dozen apps. Things got slower as each app opened, presenting splash screens or open dialogs, but once they were all open, I was able to switch to and work in apps easily. The memory management on this new processor is stunning: if I tried this on an average Intel Mac, the computer would be brought to its knees.

Battery life is amazing. They say that this model gets up to 18 hours. I’ve never gotten anywhere near what Apple claims, and part of this may be because I need the screen to be brighter than their settings when they test. But as I write this article, my battery shows 53% of charge remaining, and, if I look at the Battery pane of Activity Monitor, I see that I have more than six and a half hours of power available. This is simply stunning; I’ve never had a Mac with battery life like this.

The MacBook Air’s speakers are very good, with an immersive faux-3D sound – Apple calls this "wide stereo sound" – that makes this computer a great device for listening to music while you work. But it’s also great for watching movies or TV shows, with support for Dolby Atmos. While its retina display is excellent, it’s not as bright as the new MacBook Pro: 400 nits vs 500 nits. In most cases, this won’t make a difference, but if you work in a bright environment, you should consider whether this will be sufficient.

Do I need more?

Buying this MacBook Air was a bit of a risk: would it be fast enough, and would the minimal amount of RAM be sufficient? Since I don’t use this computer for demanding tasks, then it’s obvious that it’s more than enough for my needs.

Going forward, if these new Macs are so fast, with such excellent battery life, it looks like they might become the Macs you keep longer than any other. The time when we needed faster processors to catch up with software is over; now, the software we use for most tasks won’t hit the limit of this processor for many years.