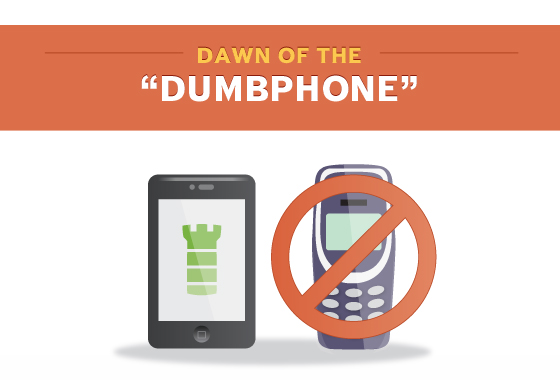 My phone was behaving strangely the other day, such that even hovering my finger too near the power button was toggling it. It seemed like a simple thing, like maybe something was sticking that shouldn’t be. So I took my phone to the repair center for what I thought would be a quick adjustment.

I came back an hour later, at the appointed time. In retrospect, the technician’s strange reaction should have alerted me that something strange had happened.

“Have you had this phone repaired before?”

Apparently, after maybe one fall too many, the innards of my phone were reduced to a jumble of broken parts that were being kept barely contained and functional by the phone’s shell. As soon as the technician opened it up, those parts all came springing out like a cartoon alarm clock that’s been silenced by a mallet.

After a lot of fretting and cramming failed to put Humpty Dumpty back together again, the repair people offered to replace my phone. Since it was Friday night, the new phone would arrive in three days. And they had no loaners and no rentals that I could use until then.

This is when depression started to set in. Three days without texting? It was like being exiled to 1995, horror of horrors! On the way home, I started considering my options. A cheap pay-as-you-go phone, perhaps? Too sad, and too likely to get me put on some watch list as a possible drug dealer. (Okay, so maybe working in security has made me a bit paranoid.)

As I walked in the door of my house, I realized there was another option: I still have every phone I’ve ever owned that is remotely operational. Job-related paranoia coupled with a hefty dose of procrastination means my house could double as a museum of mobile technology.

So I called the phone company and had them switch my account to the newest of the phones whose charger I could still locate. It’s genuine 2008 goodness; my very last Dumbphone. It’s an original LG Lotus from the era when phones were becoming increasingly tiny and candy-colored; the last phone I owned that would legitimately fit in the pocket of a pair of jeans. It’s shiny, shiny purple and covered with flowered scrolls. Definitely a contender for the world’s girliest phone design.

And while I’m on the subject of the tininess of ancient phones, how the heck did we ever enjoy picture messaging when screens were so small? When a friend sent me a picture of a label from some crazy dessert sauce, I had to admit to being totally unable to read it since the picture was maybe an inch and a half tall.

Now I know plenty of you reading this had your first iPhones by 2008, and made a hasty exit from the tiny toy-phone phase. Let’s just say I’m not what you would call an early adopter. I’m an eventual adopter; gimme version 2.0, please.

Upon resurrecting my Dumbphone from the dead, I started poking around. I knew it was going to offer very little aside from basic phone, texting and internet functionality. But wait, it has Google Maps? I clicked it, and an install file began to download. Awwww, Java applets, how cute! It doesn’t seem like that long ago that this seemed like super new-fangled functionality.

Maybe this won’t be so bad. I can still figure out where I’m going, and I can still get email, right?

But by the third time I reflexively reached for my phone to consult Evernote or some other app, it began to look like it’d be a very long weekend. By the time Monday rolled around, I truly appreciated why people call pre-smartphones “Dumbphones.”

Monday night at my house was like Christmas. Just three days ago, I had been daydreaming about switching phones as soon as they release the new iPhone. I’ve never been so excited to have two+ year-old technology as I was after being without real apps for a weekend. But I spent the whole night glued to that tiny screen, making sure everything was reinstalled and configured just so. Once you go smartphone, you can’t really go back, can you…