As noted by Computerworld, this data indicates that Yosemite (OS X version 10.10, Apple’s newest Mac operating system) has quickly jumped up the charts to become the most widely installed version of OS X on Macs in use today, now with nearly 45% of the Mac installed base. 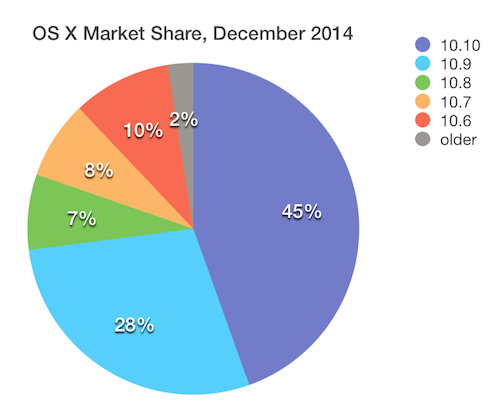 This is a significant increase over two months ago, when Yosemite had been out for less than a month, and Net Applications’ data indicated that Yosemite had nearly reached 20% of the market already by that time.

So what led to the 25% jump? And how does this relate to Mac security?

Nearly all of the gain in Yosemite’s market share came from former users of Mavericks (OS X version 10.9, which was released a year prior to Yosemite). Specifically, more than 93% of those who upgraded to Yosemite within the past two months seem to have upgraded from Mavericks (or started using a new Mac that shipped with Yosemite). 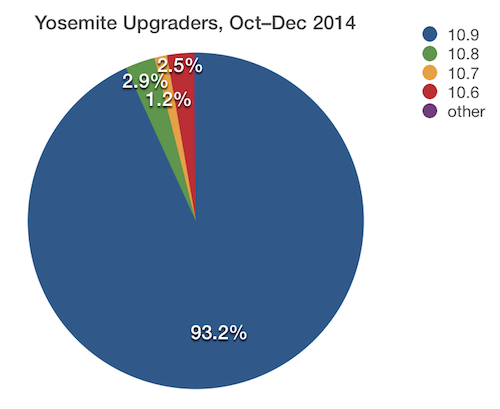 The new market share numbers indicate that a large percentage of Mac users is upgrading to the latest version of OS X. The fact that Mavericks and now Yosemite were offered as free upgrades for all Macs running Mountain Lion—and select Macs running Lion or Snow Leopard—certainly seems to have been a driving force in users’ willingness to upgrade their Macs’ operating systems.

But the latest statistics, just like the stats from two months ago, reveal that approximately one in every five Macs is running a version of OS X for which Apple is no longer releasing security patches. 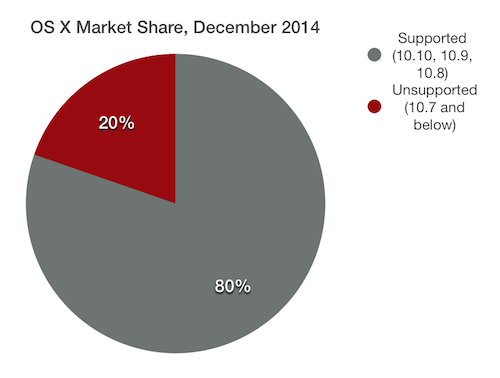 One possible reason is that not all Macs running outdated operating systems are capable of being upgraded to Yosemite due to minimum hardware requirements (see What to Do if Your Mac Can’t Run OS X Yosemite).

Other possible reasons may include users’ concerns about possible software incompatibilities; one well-known example is that Snow Leopard was the last version of OS X that allowed users to run PowerPC-native applications (i.e. software written prior to Apple’s transition to Intel processors in 2006).

Some commenters here at The Mac Security Blog have indicated that they take an “if-it-ain’t-broke-don’t-fix-it” approach (in spite of possible security risks), or that their old non-Yosemite-compatble hardware is still working fine so they hadn’t given any thought to upgrading.

Whatever the reasons for not upgrading, as we’ve said before, Apple needs to do a better job of explaining to users that their systems are no longer supported.

Perhaps that was Apple’s goal with upgrade prompt dialog boxes (such as the following one, as seen on Snow Leopard) that force you to click on a button to open the App Store app for more details about Yosemite:

The dialog box says “Get OS X Yosemite Free – New design. Better apps. More ways your Mac works with iOS.” The Snow Leopard version of this dialog box has only a “Details” button (intentionally lacking a Cancel, Close, or Not Now button).

In spite of the annoyance factor of an irremovable dialog box, I strongly suspect that these nag screens have been a driving factor in Yosemite’s rapid adoption. The upgrade prompt is so pervasive, I even happened to catch a glimpse of it on an official information kiosk at CES 2015 earlier this month: 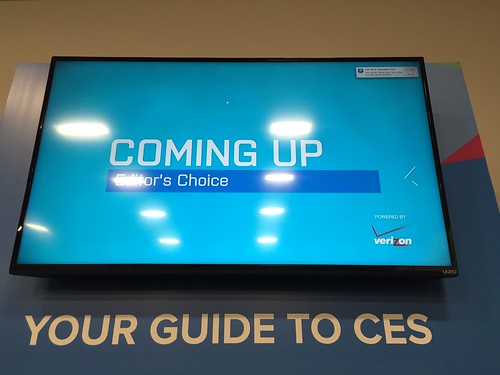 If this dialog box encourages faster adoption of Yosemite, that’s great for Apple, and it’s great for end-users’ safety.

But shouldn’t Apple be using stronger wording? How much more effective would be a dialog box that said something more along these lines:

Your version of OS X is outdated and will no longer receive security updates. Protect your Mac by upgrading to OS X Yosemite now, at no cost to you.

Perhaps at some point Apple will change the wording of the upgrade prompt to something stronger and clearer.

Let’s hope it doesn’t take a high-profile story about Macs becoming infected before Apple decides to do so.