Batteries are essential to our portable devices. For many of us, in our everyday use of Macs and iOS devices, we don’t have to worry too much about this. Modern iPhones and iPads provide a full day‘s battery life, and if you use a portable Mac, you can probably get through the day unless you are using battery-intensive apps.

But sometimes you can’t. If you’re away from home or the office for a long time, you either need to take a portable battery pack with you, or carry a charger and go hunting for available plugs. And, as your devices get older, their batteries lose capacity. This means that instead of, say, a full day of power for your iPhone, you may need to charge it sometime in the afternoon.

In this article, I’m going to tell you how you can check on your battery to see what its capacity is, and how to find which apps use the most power so you can get rid of them to ensure that your devices’ batteries last as long as possible.

To get information about your iPhone’s or iPad’s battery, go to Settings > Battery. You’ll see battery usage statistics for the last 24 hours and the last 10 days. You’ll also see your device’s battery level on a chart: you can see when it has depleted, and when it has charged. And you’ll see when your device used the most power during those periods.

In the Battery Usage by App section, you can see which apps use the most power on your device. In the above screenshot, you can see that my iPhone had the most battery usage for Twitterrific, followed by Safari, then by Flipboard – a news app – which issued 12% of my battery, including some background usage. Going further down the list, Candy Crush took 10% of my battery, and Instagram 6%. There are no big battery hogs in my list, but you may find that, on your devices, there may be apps that use a lot of battery, often because of background usage.

If you look at the top of the Battery settings on the iPhone, there is some additional information: Battery Health. This is something Apple added recently, because of the issues with batteries in some iPhones. On my iPhone 11, the battery health shows as 98%, which is normal for a phone that is eight months old. Battery health is the capacity available compared to the full capacity of the battery when the device was new. Over time, this capacity decreases, and this is why after a couple of years, your batteries don’t hold as much of a charge.

The iPhone 11 has a battery rated at 3,110 mAh when new, and there are apps that can show you what the current maximum capacity is. iMazing, a Mac app, shows that for my device the current maximum capacity is 3,126 mAh (though it says that the nominal capacity is 3,092 mAh, lower than Apple’s specs). Because of this difference, iMazing shows the battery health at 101%, even though my phone has had 187 charge cycles. 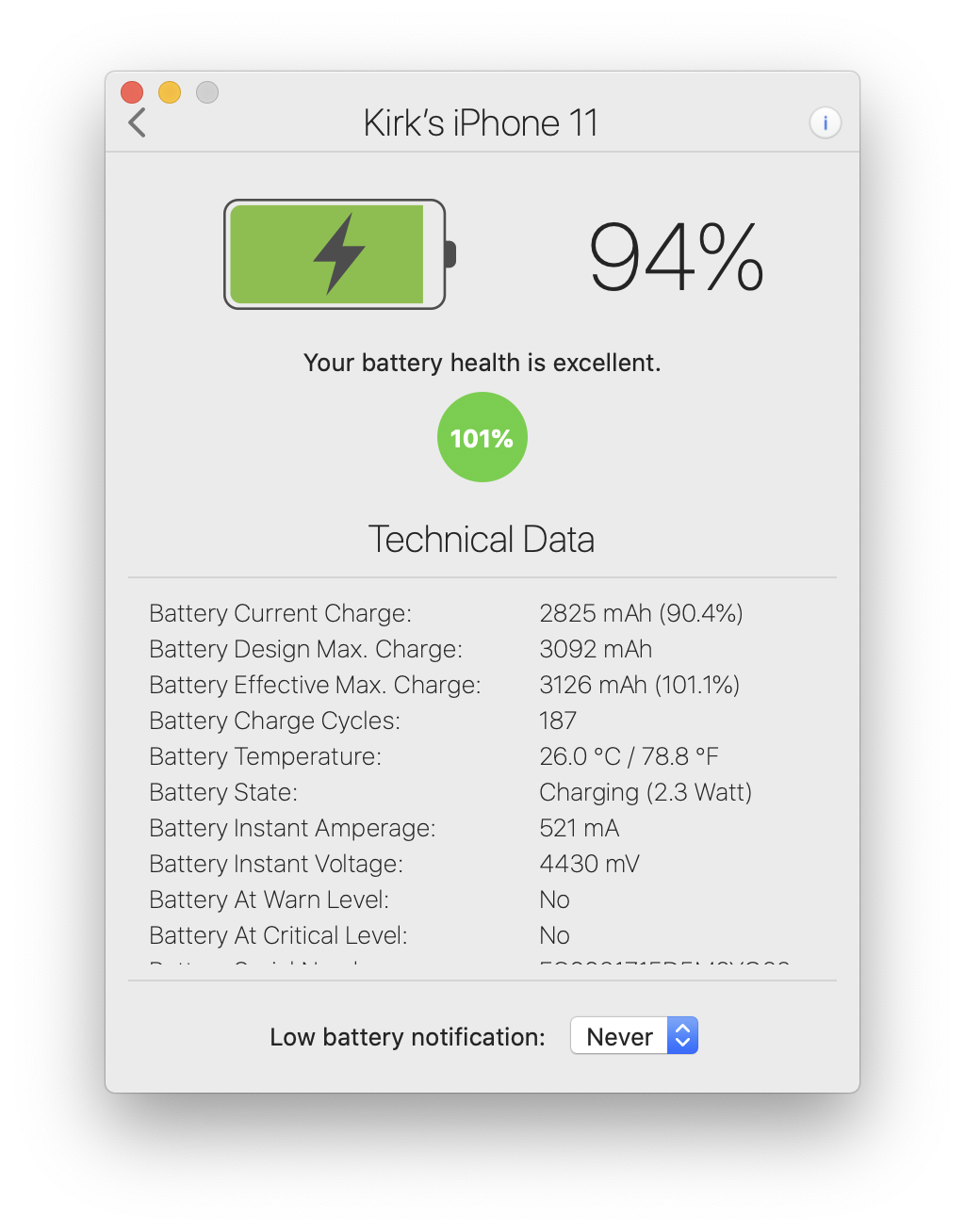 Note also that on an iPhone, at the top of the Battery settings, there is an option to put the device in low power mode. You can use this when you’re running low on battery power, and this setting deactivates a number of features that deplete the battery more quickly. These include background downloads, "Hey Siri," some visual effects, and more. Apple has a technical document explaining which features are disabled in low power mode.

On a Mac laptop, you can find some information about your battery if you know where to look. But the Battery menu extra only shows a limited amount of information. In fact, you can’t even see the amount of time remaining on a charge any more; Apple removed this in macOS Sierra. But there are third-party tools that give you this information. I use iStat Menus, whose battery menu extra provides a lot of data: 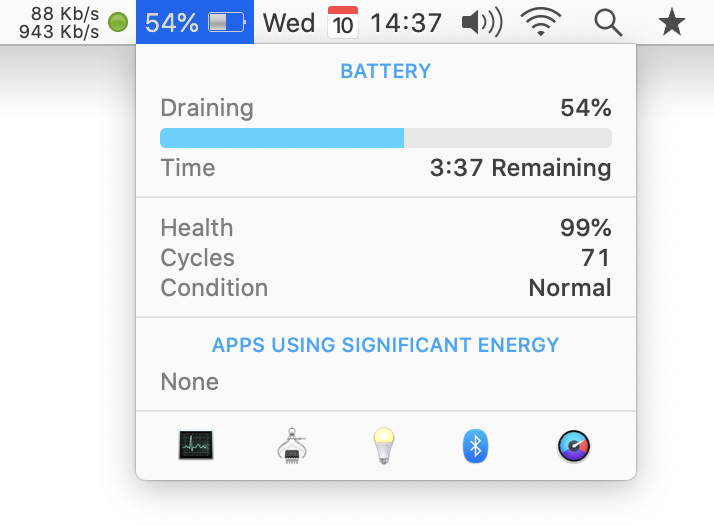 As you can see, it shows the current charge level, the amount of time remaining on the current charge, and also provides a Health indicator – as a percentage – and the number of full charge cycles your Mac laptop’s battery has had.

You can get more detailed data in the System Information app. To view this, choose the Apple menu, then About this Mac. Click System Report, then click Power in the sidebar under Hardware. 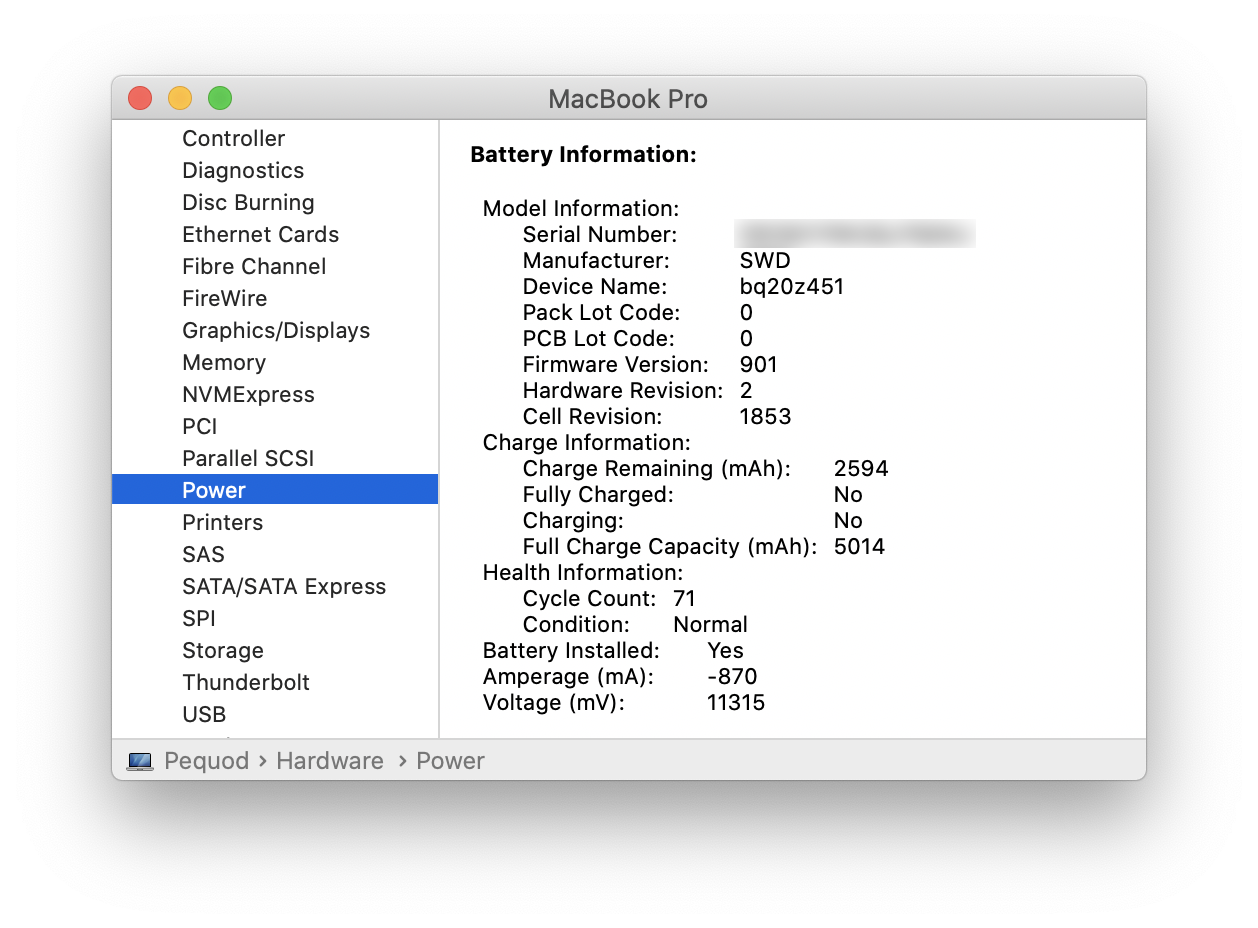 You can see the Full Charge Capacity (mAh) – 5014 for my MacBook Pro – and the Charge Remaining (mAh) – 2594. You can also see the Cycle Count – 71, the same as what iStat Menus displays – and the Condition, which is normal. Condition is the same as battery health, and this can be Normal, Replace Soon, Replace Now, or Service Battery.

What you don’t see is apps that are using a lot of power. iStat Menus shows Apps Using Significant Energy, but that is a real-time indicator; you can’t go back and see the past 24 hours or 10 days as you can on an iOS device.

You can see some battery usage data in Activity Monitor (in Applications/Utilities). If you open this, click Energy, then sort by Energy Impact, you’ll see a list of all your apps and background processes according to the amount of energy they are currently using. 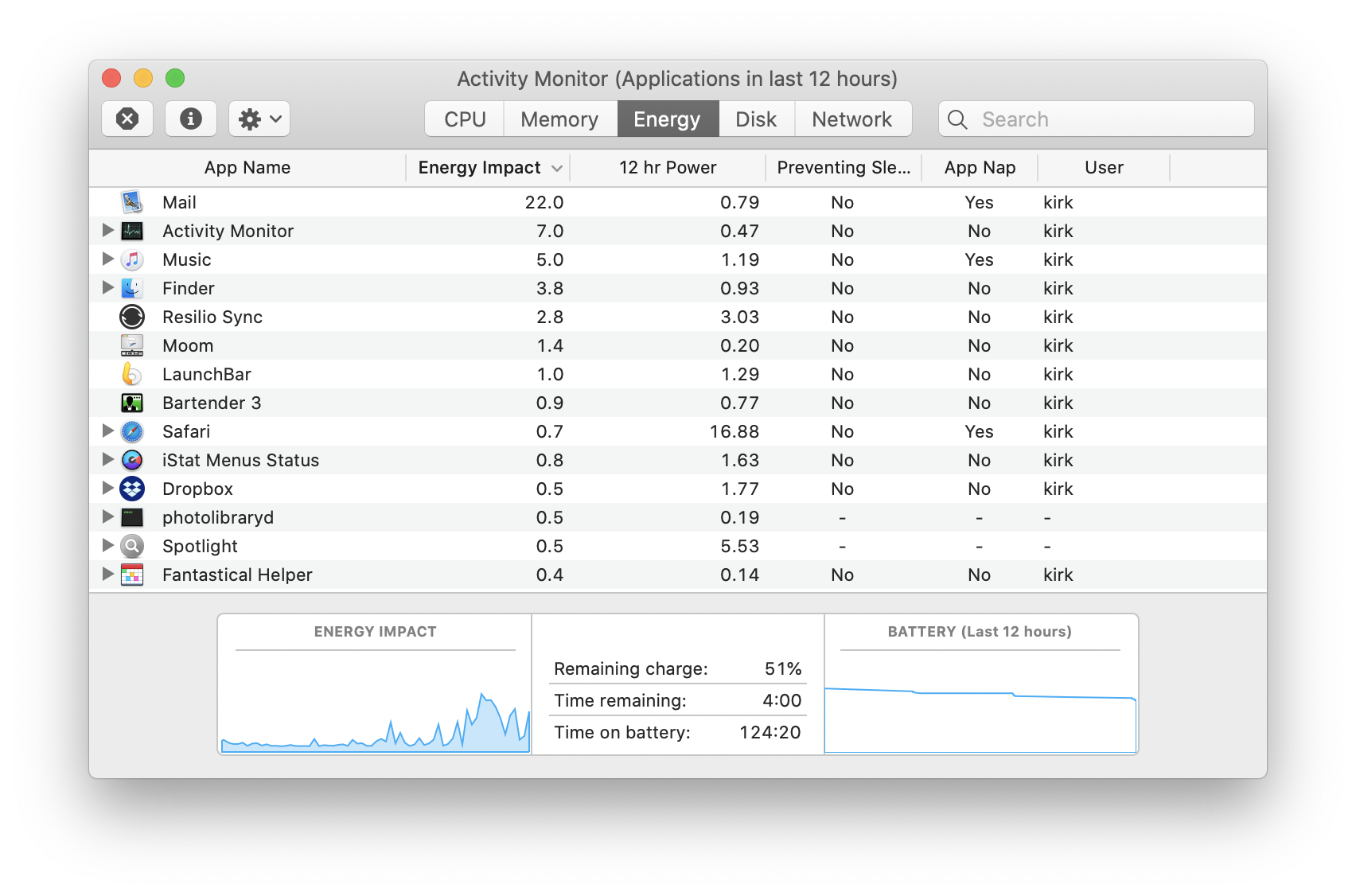 12 hr Power is an average of how much energy your apps have used in the past 12 hours; you can sort this to see which apps use the most power over time.

While the data shown here isn’t very precise, it can give you an idea if a specific app is using a lot of power. So if your laptop’s battery is depleting faster than you expect, have a look here. There are ways to reduce the energy usage of your Mac; see this article for some tips.

It’s important to make sure your batteries last as long as possible, and the data provided by these apps and tools can help you. If you find yourself running low on power often, check your devices and see if you can get rid of power-hungry apps.