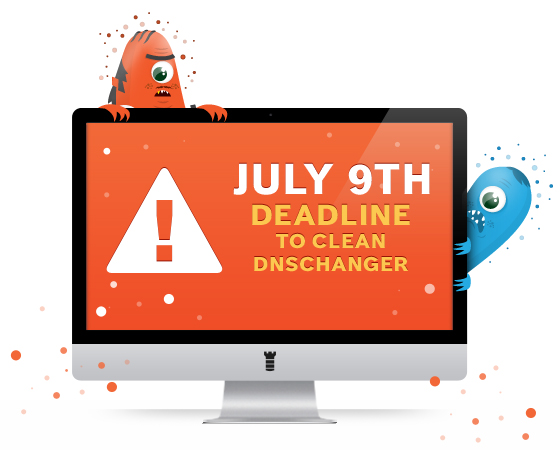 There are over 300,000 machines that are about to be shut off from the Internet because they’re infected with malware. For those people out there whose machines are infected with DNSchanger malware, July 9th may be the day the Internet stops. This week is their last chance to get their machine cleaned up before they’re cut off.

This may sound shocking – why would people suddenly get kicked off the Internet because they have malware? It’s sort of a complicated situation that came about because the FBI was successfully able to stop the activities of some cyber-criminals.

A few years back, there was a group of malware writers who wrote Trojans that caused machines to be redirected when they tried to access the web. It’s as if the infected computers were using a modified phone book that only had phone numbers of a single corrupt company and their partners.

Any time you tried to get search results, the malicious servers would only point to their businesses’ results instead, and you would be stopped from going directly to security sites if you tried to clean up your machine. This Trojan worked on both Windows and OS X. The first OS X variant was released in 2007, and quite a few variants were released after that.

The FBI shut down the malware groups that wrote these Trojans last fall. They essentially hijacked the hijackers and put a private US company in charge of the servers that were previously passing bad information. People whose machines are pointing to those servers are no longer being maliciously redirected.

On July 9th, the US government’s shutting those servers down entirely, so infected machines will be pointing to non-existent servers and won’t know how to go to any Internet addresses anymore. But the FBI has provided a very simple tool for you to check whether yours is one of those machines that will be cut off. And if your machine is infected, you will need to clean it as soon as possible.

Intego VirusBarrier X6 with up-to-date malware definitions will clean your machine of this malware; so don’t hesitate to get your computer cleaned before the July 9th deadline.