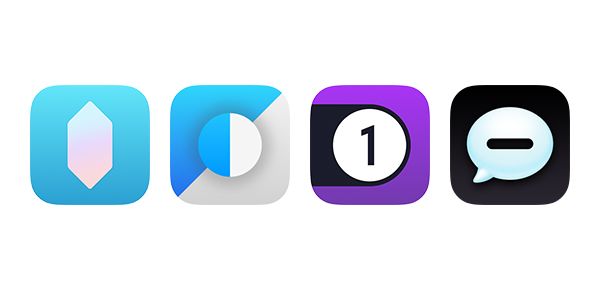 If you follow tech news, you’re probably aware of the controversy over ad blockers. iOS 9 allows users to install and implement “content blockers.” These apps, which hook into the Safari web browser, can block ads and other types of content. As such, many web publishers who depend on ads are crying foul. They are saying that people using these ad blockers are freeloaders, and that ad blockers will harm their bottom line.

But users complain that ads make mobile browsing too slow, use up too much data, and compromise security and privacy, by tracking users and creating profiles of them in order to serve targeted ads.

It’s fair to say that the publishing industry has caused this problem through a willy-nilly approach to advertising that makes web browsing painful, particularly on mobile devices. The New York Times showed just how much of a difference in time and data an ad blocker can make on a number of popular websites, including its own.

In this article, I will explain how to install, set up, and use ad blockers on iOS 9.

At first, there were only a couple of ad blockers. On the day iOS 9 was released, the Peace app, by Marco Arment, was the runaway best-selling on Apple’s App Store. But the developer pulled the app less than 48 hours later, saying “Peace required that all ads be treated the same — all-or-nothing enforcement for decisions that aren’t black and white. This approach is too blunt…”

Other ad blockers followed, and there are now a couple dozen of them; you can see a list in this article on The Loop, and new ones are appearing each week. There are many reasons to choose one ad blocker over another, including the types of content they can block, and how fast they are. Also, I strongly recommend using an ad blocker that lets you whitelist websites that you like; these are sites that you want to support, that respect readers, and that don’t overwhelm you with annoying ads.

These ad blockers work in a very simple way: they have a list of filters, made up of ad servers and file names that they block. They block requests for these elements. Some of them can also block ads in apps like Facebook and Apple’s News. But Apple has withdrawn these from the app store, because they presented security risks by sending data through a VPN (virtual private network) to remote servers.

Some ad blockers also block “trackers,” code on web pages used to follow you and make a profile of your browsing habits. This was the basic principle behind Peace, which licensed technology from Ghostery. Trackers not only invade your privacy, but also slow down your browsing by sending data to remote servers and waiting for responses.

I use the free iBlocker, which has a $2.99 in-app purchase to unlock all its features. If you want to try out an ad blocker, you might want to start with this one too, since you can test its basic features for free. (I also use the free Shut Up, which blocks comments on web pages; that also speeds up page loads.)

After you’ve downloaded an ad blocker from the App Store, activating it is easy, but you must do this manually. Go to Settings > Safari > Content Blockers and toggle the switch next to the name of the blocker you’re using. 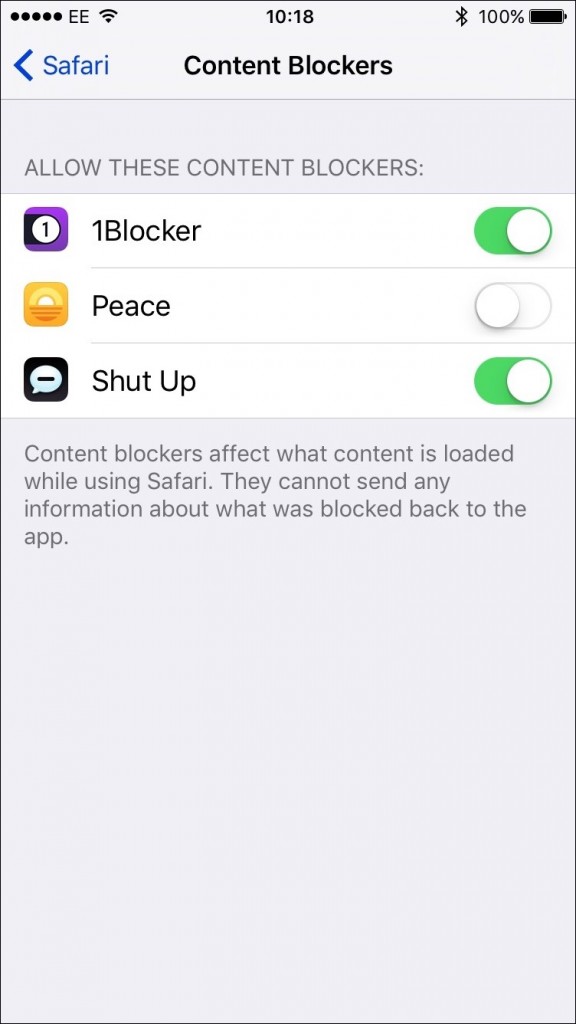 That’s all you need to do. Your ad blocker will now work automatically when you load web pages in Safari.

Note that you can use multiple content blockers, though it’s a good idea to not use more than one app to block the same kind of content. As I said above, I use one ad blocker and another app that blocks comments.

Depending on which app you’ve chosen, however, you may have configuration options. 1Blocker offers a number of types of content you can block: 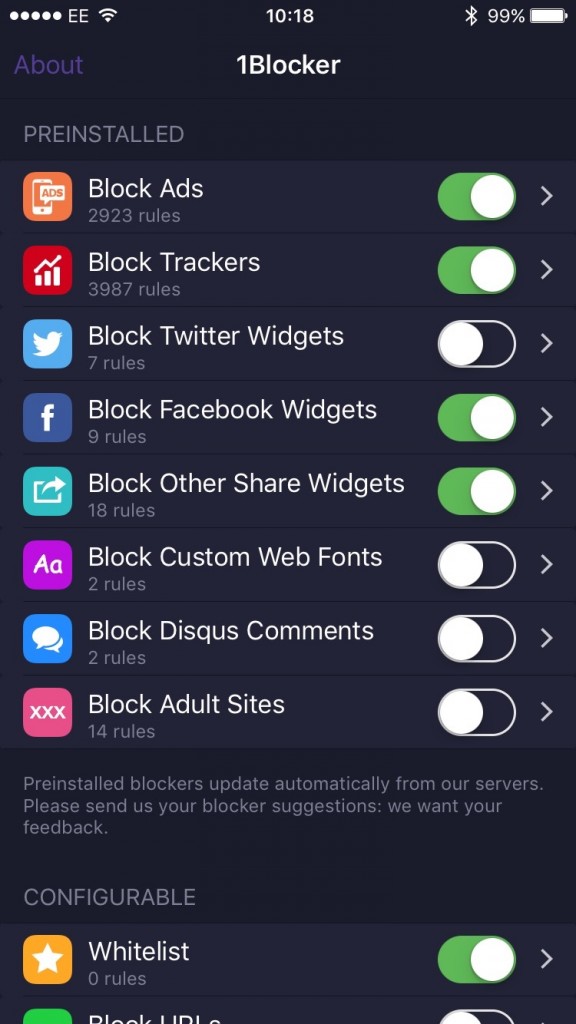 For example, you can choose to block ads and trackers, but you may not want to block Twitter or Facebook widgets. You can choose to block custom web fonts, which can slow down browsing, Disqus comments (we use Disqus for comments on this blog), adult sites, and more. There is also a whitelist, where you can add sites you want to support, and some further advanced options as well.

When you surf the web with Safari and an ad blocker on iOS, you will immediately notice the difference. Pages will load much more quickly, especially if you are not on Wi-Fi. Pages will be less cluttered as well; instead of ads breaking up content, jiggling, or moving, you will be able to read articles much more easily. Depending on which ad blocker you use, other types of content may be blocked. As you saw above, 1Blocker can block Twitter and Facebook widgets, and certain types of comments. The other blocker I use, Shut up, blocks most comments at the bottom of webpages, so I only see articles.

However, in some cases you may want to override ad blocking. Ad blockers are not very intelligent, and sometimes their filters can prevent webpages from loading, or block types of content that you do want to view. If this is the case, press and hold the reload button in Safari’s address bar. A menu displays at the bottom of the window allowing you to Reload without Content Blockers. 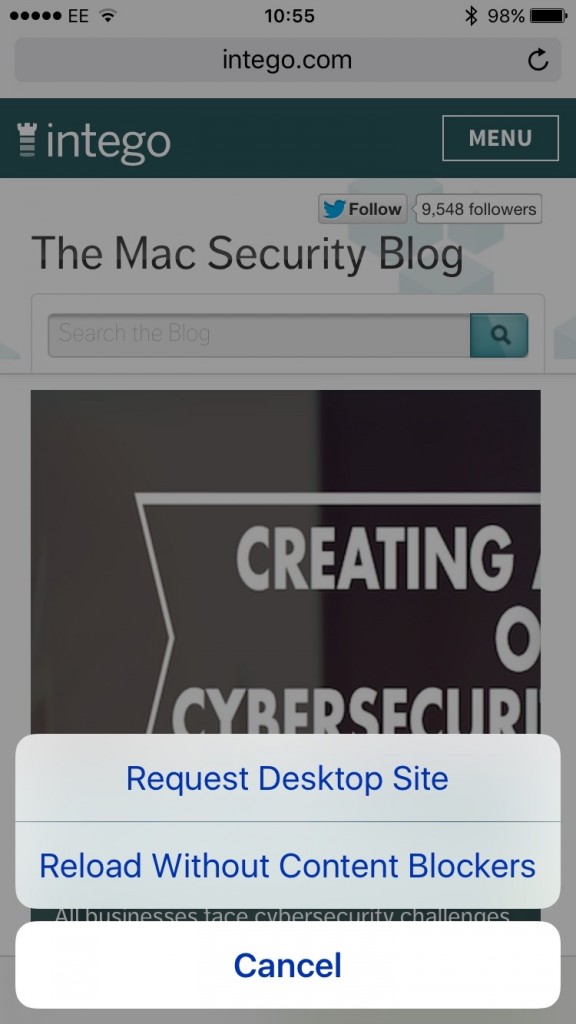 Tap that menu item and the page will reload with all of its content.

Ad blockers aren’t new; people have been using them on the desktop for years. But the sudden arrival of ad blockers on mobile devices has put the publishing and advertising industries in turmoil. They have brought this on themselves, by making the browsing experience bad enough that people feel the only way to read content on mobile devices is by blocking ads. Also, the fact that mobile websites use so much data has a direct cost to users.

Publishers and advertisers will have to choose a new way of monetizing websites, and hopefully things will get a bit better. But in the meantime, you now have a tool that lets you surf the web with fewer distractions, and much more quickly.