Microsoft has released a security update for Microsoft Office for Mac 2011, resolving two remote code execution vulnerabilities and an information disclosure vulnerability. The Microsoft Office for Mac 2011 14.3.7 update provides the latest bug fixes for critical issues and helps to improve security. Described in the Microsoft AutoUpdate notice, the software update “includes fixes for vulnerabilities that an attacker can use to overwrite the contents of your computer’s memory with malicious code.” 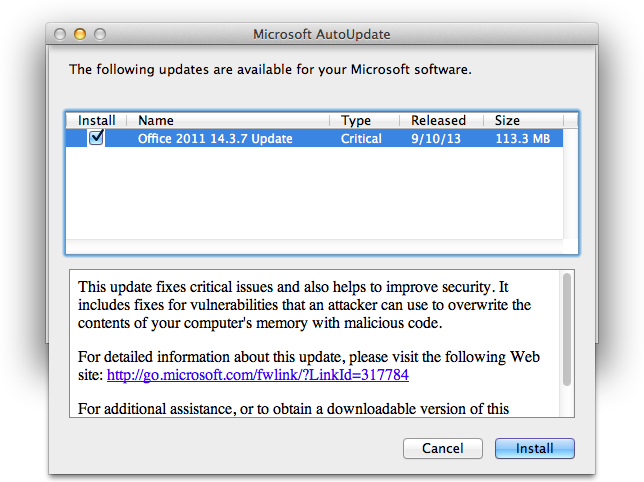 The most severe vulnerabilities could allow remote code execution if a user opens a specially crafted Office file with an affected version of Microsoft Excel or other affected Microsoft Office software. An attacker who successfully exploited the most severe vulnerabilities could gain the same user rights as the current user. Users whose accounts are configured to have fewer user rights on the system could be less impacted than users who operate with administrative user rights.

Additionally, the following information about the resolved vulnerabilities is contained in the Common Vulnerabilities and Exposures list: