Microsoft has released Office for Mac 14.5.8 with security patches for two memory corruption flaws and a Mac spoofing vulnerability. The most severe of the vulnerabilities “could allow remote code execution if a user opens a specially crafted Office file,” said Microsoft in its security bulletin (MS15-116). 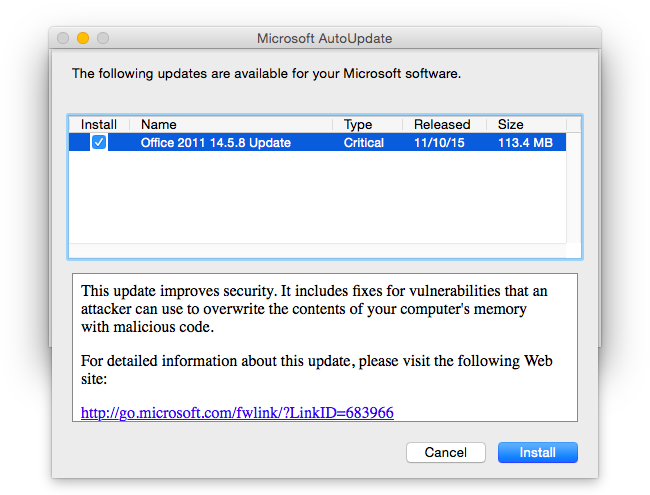 The Office for Mac update addresses three security bugs altogether — two of which are related to remote code execution (memory corruption vulnerabilities) and the other related to spoofing. Microsoft summarized the Mac spoofing bug in its security bulletin:

For [the Mac spoofing vulnerability] to be exploited, a user must preview a maliciously crafted email from an attacker where they would unknowingly be redirected to a malicious URL. [In turn], the malicious website could spoof content or be used as a pivot to chain an attack with other vulnerabilities in web services. […] At the time this security bulletin was originally issued, Microsoft is unaware of any attack attempting to exploit this vulnerability.

Details of the vulnerabilities patched in this update are as follows: